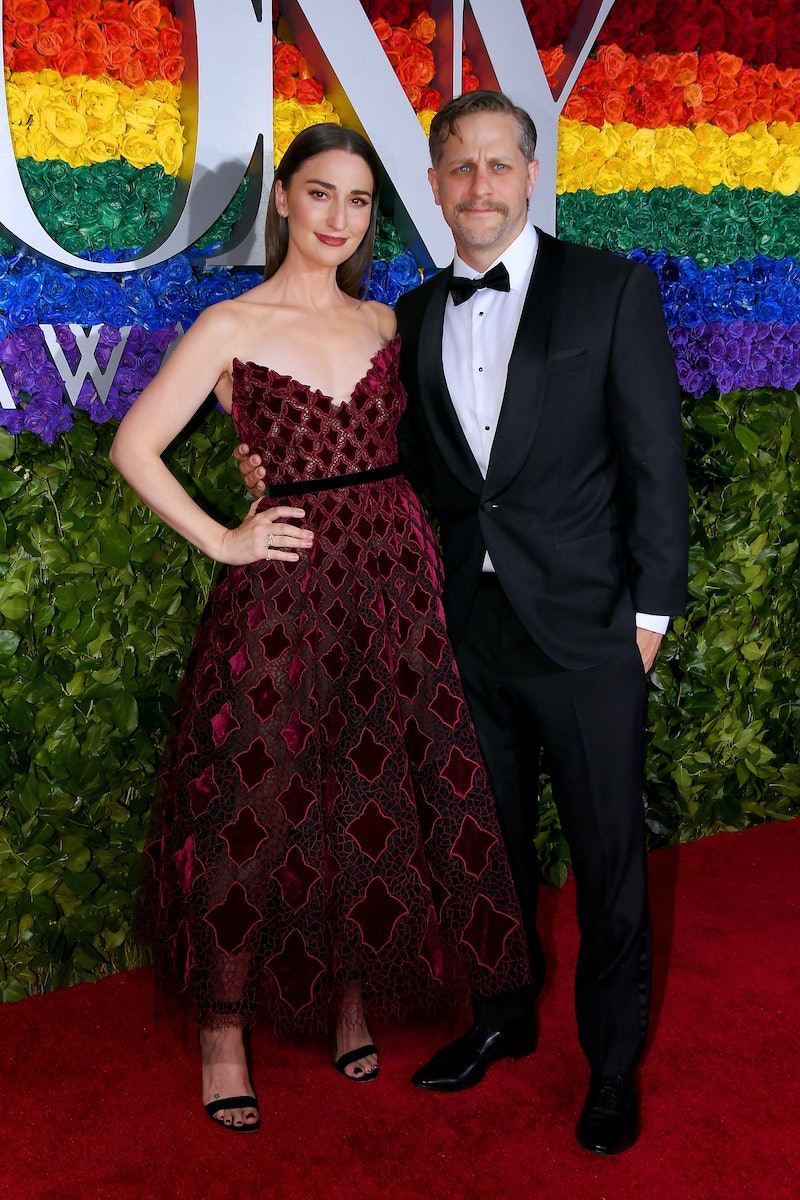 Sara Bareilles may have created your high school break-up jam "Love Song" back in 2007, but she's also an unexpected Broadway darling right now. Bareilles wrote the original score for the musical Waitress, which premiered on Broadway in 2016. Since then, Bareilles has attended the Tonys every single year in style — and 2019 is no exception. Sara Bareilles' 2019 Tony Awards gown was a wine-red goth gown with some serious moody vibes. With crushed velvet accents and a dramatic neckline, Bareilles made a stunning appearance on the red (and rainbow) carpet.

Bareilles was a presenter at the 73 annual Tony Awards, which took place in New York City on June 9. To fulfill her presenting duties, Bareilles wore an ankle-skimming tea length tulle dress that was all about the drama. The black gown featured a red velvet diamond-like pattern with silver trimming. Cinched at the waist with a black ribbon, the gown also featured a killer neckline. Rising in two peaks at the bust, the gown's top lended some added glamour to the look.

To complete the award show ensemble, Bareilles wore a wine lip, bold blush, and simple eye makeup. Her hair fell straight down her back in a sleek style that didn't challenge the fashion forward vibes of her gorgeous gown. Along with simple black sandals, Bareilles wore understated diamond studs to accessorize her look. And that's all — no necklace, no bracelets, no nothing. The perfect balance of minimalism and unapologetic style maximalism.

Overall, it was an elegant look that may remind you of the dancing dead girl from My Chemical Romance's "Helena" music video circa your teen days. Only pump up the elegance and tone down the eyeliner.

As a presenter at this year's awards, Bareilles is expected to have some serious style game to take the Tonys stage. But the singer-songwriter is also under a lot less pressure than last year. In 2018, Bareilles hosted the awards ceremony with singer Josh Groban, taking viewers through the night's grand events.

On the red carpet last year, Bareilles wore a copper-colored gown with sparkly, detail and a deep V-neck. The dress included a ruffled, tiered skirt for added drama and flare. The 2018 gown had a similar silhouette to this year's velvet look, proving Bareilles has a signature style that certainly works.

On stage at the 2018 Tonys, Bareilles wore several more stand-out outfits, giving viewers a quick costume change at seemingly every single commercial break. Notably, she wore a tea-length black dress and a wine-colored sequin number during her hosting duties. Looking back, those gowns perfectly foreshadow her look tonight.

Again, Bareilles has a signature style that definitely works for her.

Serving dramatic and bold af looks is what Bareilles does best at the Tonys — and Broadway's biggest night is the perfect occasion for some unapologetic flare. If creating memorable songs is Bareilles' true talent, being a bona fide fashionista is her hidden skill. And it's time we all recognize and appreciate.