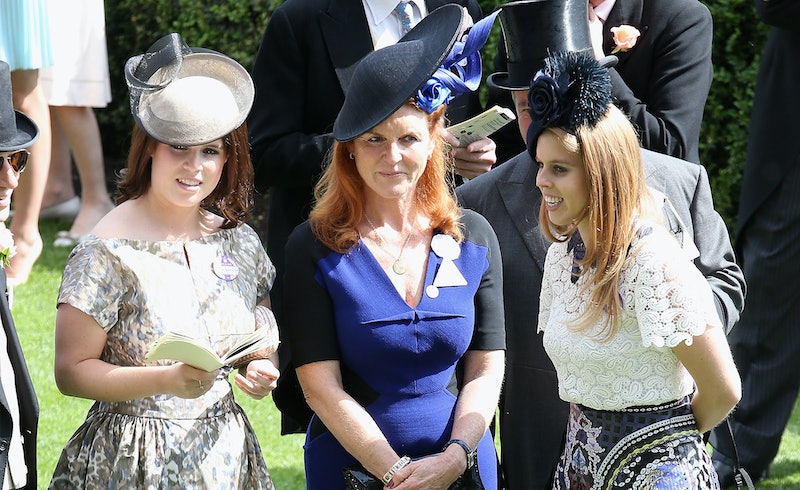 It’s been so lovely to see Sarah Ferguson back in the news recently, as the bubbly former royal always keeps things interesting. Following the surge of press following her daughter Princess Eugenie’s wedding, the focus has returned to her many charity projects. While promoting the mission of her education-focused charity Street Child, she reflected on how her daughters were “lucky” to have the “luxury” of education. Sarah Ferguson talked about raising Princess Eugenie and Princess Beatrice, explaining that they were very fortunate even if there have been some challenges along the way.

According to Hello! magazine, Ferguson spoke to Press Association at a recent fundraising event, telling them, “My work has saved my life. Kept me grateful, kept my feet on the ground. Kept me realising how lucky that my children — Eugenie, as you now know, is disabled with 12in metal rods down her back, Beatrice is dyslexic with special needs at school — and yet they had an education.”

The former Duchess is one of the founding patrons of Street Child, which aims to send children in developing countries with an education to break the cycle of poverty. On its website, the charity claims to have helped over 200,000 children go to school across the world.

The new funds from Ferguson’s Count Me In appeal will “buy school uniforms, train teachers and build classrooms...in ten countries from Sierra Leone to Afghanistan” according to Hello! magazine.

She continued, “Why isn’t any other child allowed that same luxury [as Princess Eugenie and Princess Beatrice]? And why is it a luxury?”

Sarah Ferguson’s compassion is something that’s been passed down to her daughters as both Princess Eugenie and Princess Beatrice are both very involved in charitable efforts. As mentioned earlier, Princess Eugenie was diagnosed with scoliosis at a young age and it’s impacted the course of her life. Following a successful surgery at 12 years old, she was instrumental in fundraising for the National Orthopaedic Hospital - the hospital which aided her - as well as becoming a patron of the European School of Osteopathy to educate new doctors.

Princess Beatrice’s charity efforts overlap with her mother’s interests, as, according to her official royal profile, she “focuses the majority of her charitable work around children’s welfare and education”. In fact, she’s actually one of Street Child’s global ambassadors. As her mother said, she was diagnosed with dyslexia at the age of seven and became patron of the Helen Arkell Dyslexia Centre; opening up about her experience with the condition in an interview with the Express.

She also called herself “lucky” to have received the education she had, but said, “If I had a magic wand I would love to see more tools for teachers so they’d know how to balance their time as well as give children of all different capabilities the right to find who they are.”

It's kind of sad that all of that isn't a given already, but thank goodness there are people like them trying to make a difference. If you’d like to support Street Child and their efforts, you can make a donation to their Count Me In campaign online. Donations received before Feb. 21 will be matched by the UK government, so it’s worth sending money in sooner rather than later.