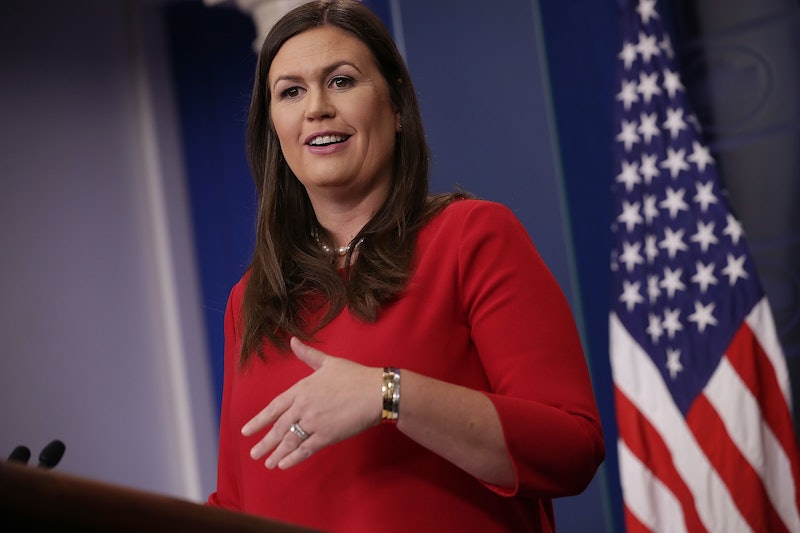 Faced with week after week of shock, scandal, and unpopular policy coming out of the Trump administration, many Americans say they yearn for the years when the country was under President Obama's leadership. But while many wish they could swap Donald for Barry, it was White House Press Secretary Sarah Huckabee Sanders who referred to Trump as Obama during a press briefing on Tuesday, sparking Twitter users to commiserate with Hucakbee Sanders over their desire to return to the good 'ol Obama days as well.

Huckabee Sanders was giving a press briefing on Trump's direction on Tuesday to end DACA, or "Deferred Action for Childhood Arrivals." The Obama-era program protected "DREAMers," or children who were brought to the United States illegally, by allowing them to remain in the country without fear of deportation. Trump directed Congress to create new legislation to replace the executive order that created DACA, before the program would begin to phase out March 2, 2018.

"President Obama is laying out a responsible 24-month phase out," Sanders said, before continuing on, not realizing her error until reporters in the room corrected her.

I'd like to think that Huckabee Sanders' subconscious couldn't find a way to use the words "Trump" and "responsible" in the same sentence, but here are some of the thoughts Twitter had for the tongue-tied press secretary.

We know it's hard to accept Trump as president when you know what once was. We know, girl.

Things must be getting pretty bad if even those employed by the Trump administration are wishing we were back in the Obama years.

The Trump White House doesn't have the most stable of staffing outlooks, so Huckabee Sanders should be careful if she doesn't want to go the way of her predecessor.

I'll Just See My Way Out

Huckabee Sanders may want to avoid the West Wing for a few hours.

Trump being president is not an easy concept for any of us to get used to — Huckabee Sanders included, apparently.

The "Responsible" Part Threw Her Off

It was the "responsible" characterization that led her to believe the sentence couldn't have been about Trump.

This was probably the face of many of the reporters in the room.

It's the fact that the two men are so strikingly different in almost every aspect that makes it so amusing that Huckabee Sanders would mix them up in her briefing.

At least this mixup won't end in divorce.

Biden Is All Of Us

While Huckabee Sanders may be embarrassed of Tuesday's slip up, for many it was probably her most relatable moment.

We know that President Obama is never coming back, but it's moments like these when we can at least take solace that even for those employed by the current administration, 44 is still on the mind.