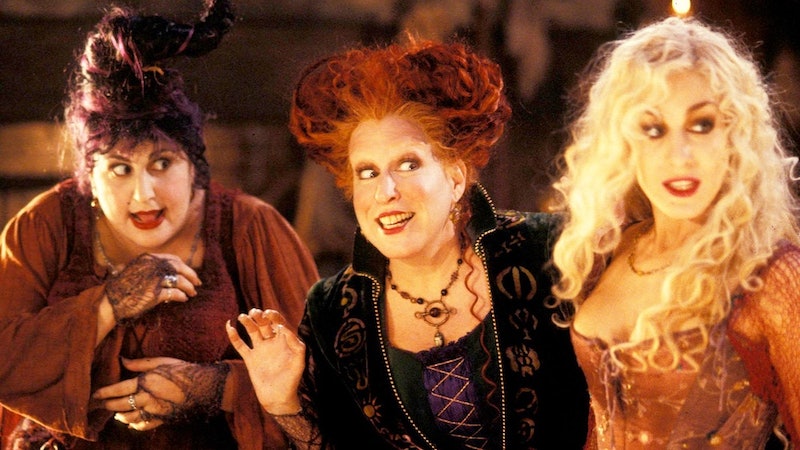 Get those witch cauldrons ready: Sarah Jessica Parker teased a Hocus Pocus sequel in a recent interview, revealing that much of the original cast and crew is on board. Speaking with Bruce Bozzi on his SiriusXM radio show Quarantined with Bruce on May 29, Parker said that a sequel to the 1993 film directed by Kenny Ortega would be “a very, very fun idea” — and divulged that her former onscreen witch sisters Bette Midler and Kathy Najimy are also keen on a second film.

“I think it’s something that Bette and Kathy and I are — we are very hospitable to the idea,” Parker told Bozzi. “For a long time people were talking about it as if people were moving forward with it in a real way, but we were unaware of it. But I think now, we've gotten to the point where we’ve agreed publicly to the right people, [that] ‘yes, that would be a very, very fun idea,’ so we’ll see.” She added, “We’ll see what the future holds.”

Considered a cult classic, Hocus Pocus follows Parker, Midler, and Najimy as a coven of evil, outlandish witch sisters named Sarah, Winifred, and Mary, respectively, who are awakened from the dead by a teen named Max (Omri Katz) and soon wreak havoc on the town of Salem, Massachusetts.

Disney+ announced in October 2019 that a Hocus Pocus sequel was in the works, but not much information has been released about the follow up and whether or not Parker, Midler, Najimy, or the rest of the original cast would return. In March, it was further announced that Adam Shankman had been tapped to direct the sequel. At the moment, it’s still unclear if any of the original witches — as well as original actors Katz, Vinessa Shaw, and Thora Birch — are attached to the Disney+ project.

This isn’t the first time members of the cast have expressed a desire to reprise their beloved roles. In an interview with Entertainment Tonight last October after the Disney+ news broke, Midler said she would be up to return. "We wanna fly again. I hope Disney+ is a big success and I hope we get to do it, because [Winnie] is, of course, one of my favorite characters," she said. "I can't wait to read the script. We're gonna see what happens."

Najimy told the publication in a separate interview, “Here's the honest answer: Sarah and Bette and I all have a million projects and things that we're into, so I don't know if they're gonna offer us [parts].” She added, “I'm happy that it's happening, because the fans are really rabid and they really want it, [and] if we're not all available to star in it, I think it would be so great to do a cameo. I think that'd be really fun."

Could the original witches soon fly again? It's the magic we all need right now.