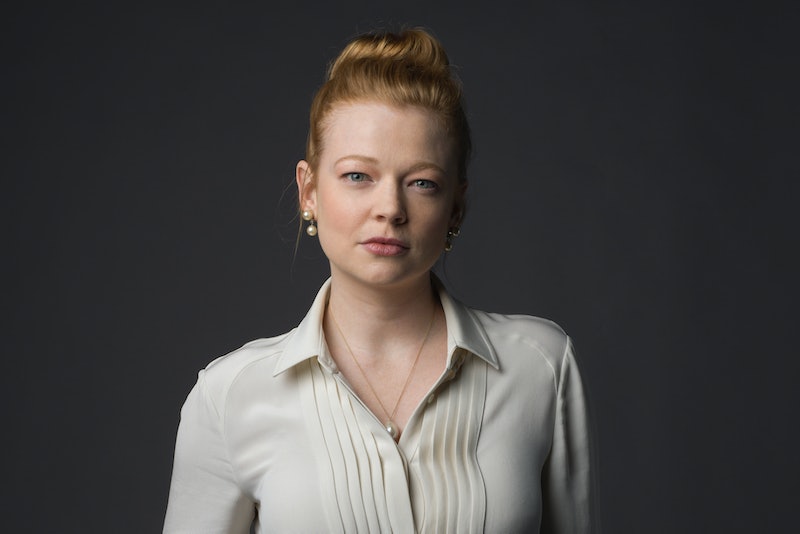 Spoilers ahead for Succession Season 1 Episode 7. After six episodes of bottling up resentments and maneuvering behind each other's backs, the Roy family finally laid everything out on the table in the season's seventh episode, "Austerlitz." "That was a really fun one to shoot," Succession star Sarah Snook tells Bustle in an interview about the game-changing episode, in which Logan Roy and his four dysfunctional children hash everything out in a misguided therapy session at a lavish ranch in the desert. "We all went camping together, basically; we went to Santa Fe to shoot that. It kicked everything up another notch. The family dynamic becomes a little more dangerous between them all."

At the climax of the tense hour, Brian Cox's Logan unleashes his pent up vitriol upon his four rebellious offspring — which includes accusing Snook's character Siobhan (Shiv for short) of marrying beneath her to preemptively shield herself from betrayal. "I think it's one of those unfortunate truths," Snook admits about Logan's perception of her character's relationship with fiancé Tom Wamsgans (Matthew Macfadyen). "I don't think she's consciously chosen someone who's beneath her in that sense, but I think Shiv has the feeling of wanting to exert some sort of control over her life in some way, and Tom is the person she can do that over."

But at the same time, "there's real affection there," Snook insists. "We played around with the idea that Tom and Shiv met at a time she was in quite a lot of turmoil in her life. And so he was there for her as a rock, as an anchor that she could rely on. What that is, we don't know, we haven't decided upon — or if I have, it's a private thing — but I feel like that rang true to me."

The key to nailing that pivotal moment for the Roy family came down to one secret: improvisation. "There's a lot of improv," Snook confesses about the surprisingly hilarious show — which isn't that much of a surprise when you consider the fact that it hails from the minds of Jesse Armstrong (the Oscar-nominated writer of the British political satire In The Loop, which he penned alongside Veep creator Armando Iannucci) and Adam McKay (the Oscar-nominated director of the scathing Wall Street send-up The Big Short).

"Jesse, the showrunner, would give us our scripts, we'd learn them the day we'd shoot them, we'd shoot them as written, the director would do maybe two or three takes as written, and then Jesse would come in and say, 'Great, we've got that, let's change this line, let's change that line,' and he would have a bible of alternate lines for every page. And then they'd trust us to make up whatever we thought would be a good line, and that got to be really fun. I didn't have enough confidence at the beginning to do that, but then I warmed into it."

The improvisational spirit of the series — and the natural chemistry between the actors — really highlights the specific and disparate relationships between each of the Roy siblings: Shiv and her three older brothers Connor (Alan Ruck), Kendall (Jeremy Strong), and Roman (Kieran Culkin). Which of them does she enjoy sparring with the most? "That's like asking someone to pick their favorite kid!" Snook protests. But pressed for an answer, she chooses Culkin. "The most fun and irreverent is probably working with Kieran, because Shiv and Roman have such a sibling, cat-and-dog relationship. They can be punching each other one minute and then scheming together the next."

How exactly did growing up with three brothers — not to mention a domineering father and an absentee mother, surrounded by the predominantly male culture of conservative corporate-controlled media — affect Shiv? "This came up in the audition, actually," Snook remembers. "I talked about it with Adam [McKay], about how, growing up being the youngest, being overwhelmed with these male-dominated things in her life… she could play the princess, but that's not going to get her far in competition with them. I think she naturally has this competitive nature that's from her dad."

Snook thinks Shiv quickly learned to use her femininity to her advantage. "In some ways, being a woman in that sense, it’s absolutely a powerful thing, because she can afford space around her. But then obviously it can be to her detriment, being outnumbered. So she had to learn how to overcome that; I think Roman and her definitely had fist fights and punch-ups, but then she could easily turn around and be like, 'You can't hit a girl!' You've got to use that angle if you're going to use your own fists."

Shiv isn't the only female character on the show — there are a few others, including the company's in-house council Gerri (J. Smith-Cameron) and Logan's enigmatic third wife Marcia (Hiam Abbass) — but the youngest Roy definitely carries the majority of the weight of representation on her shoulders. That's something that made Snook think twice in the early going. "One of the things that gave me pause initially was that there were so many men," she says. "Being the singular female… there's got to be some great writing attached to it, otherwise I'll get lost in the milieu. I'm not really interested in playing a role like that. And so the thing that attracted me to it was that she was so forthright, interesting, and such a strong character. But besides that, she was infinitely complex and had unlikable qualities about her as well, which I think is a good thing."

Roy's daughter has largely stayed outside of the family business up to this point, choosing to forge her own path in politics instead — but is there a version of the show's future where Shiv ends up running the company? "I always presumed that would be the case, having read the pilot, that that was a desire of hers," Snook recalls. "And speaking to Jesse [Armstrong], he was like, 'Eh, I don't think so.' And I like that he was so blasé about it. Like, yes, she probably thinks she'd run the company the best, but does she actually want it? Does she want to have that responsibility?"

Snook doesn't think so: "Part of Shiv that's interesting to delve into is how she sets things up to surround her to protect herself. Part of that is her relationship with Tom, which protects her by having a solid, good person who she'll go through the motions of getting married to. She's followed a career in something that she could fail in, but it's not consequential for the rest of her family or her name. For Shiv, it's got to be a point where she can really see no other option but to take over for her to move forward, because if you fail, then that's the end. She doesn't like failing."

But what about Snook herself? Would she like to see Shiv run Waystar Royco someday? "Don't we all want to see a kickass female CEO at the head of a company?" I think we can all agree on the answer to that.