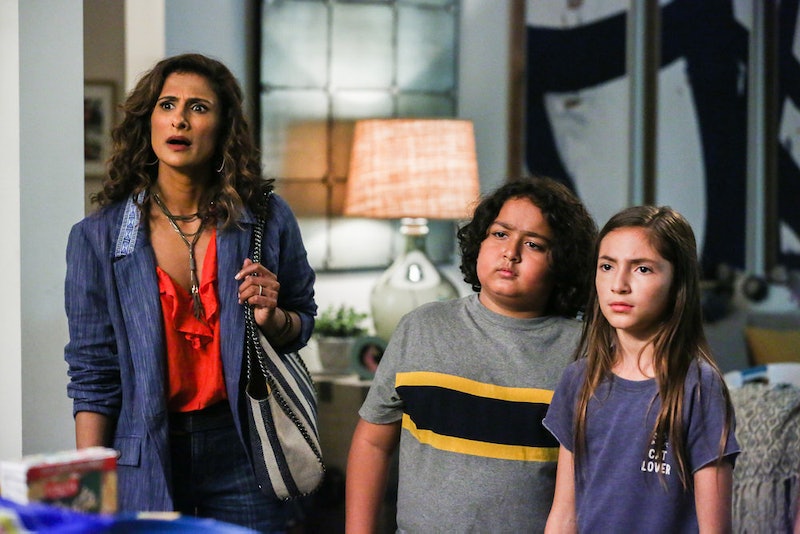 Though great strides have been made in terms of gender equality, we still pretty much live in a world where “feminism” is a dirty word. And while cable, streaming, and premium networks have launched tons of programs with cutting “feminist” humor and tell-it-like-it-is jokes, there haven’t been many on network television, who tends to play it safer than its cable-package counterparts. There are more subscribers, and with more subscribers come more people who are easy to offend or get outraged, and given the state of the world these days, a show featuring a woman talking frankly about her experience might actually irk some people. Luckily, NBC’s new sitcom I Feel Bad isn’t pulling any punches with its feminism and approach, and the show is all the better for it.

On I Feel Bad, Emet (Sarayu Blue) is a mom of three who is dealing with her kids, her parents, her husband, and her job, which is that of a video game designer. It’s an awesome job that she loves, but she’s surrounded by a group of man-babies that she has adopted as her own. They’re basically just more children for her to take care of, and from what we know of the IRL video gaming world, that sounds about right.

Emet is tired, because she has to monitor all of these people and keep them alive and also be sexy and on top of things at work, and also never get mad or irritated. You know, typical stuff in the world that’s called “being a woman.”

This is typically well-trodden material, but on I Feel Bad, the larger points about the world at large aren’t mollified or watered down for an extended audience. In the premiere episode, Emet’s daughter, Lily, quits quiz bowl in favor of the dance team, and the dancing is, well, not totally age appropriate for a 10-year-old — there’s a lot of gyrating and twerking for someone who is still in elementary school. It’s obviously inappropriate, but Emet wants to delicately extract Lily from the dance team without making Lily hate her or shame her, because sexualizing a 10-year-old isn't the way to go either. Emet wants Lily to live her life how she wants to, but not while dancing to “My Humps,” while humping the ground.

Emet’s husband wants her to be “cool” and “chill” while assessing the situation, because women who are neither of those two things are seen as naggy and demanding. Her daughter’s dance partner extends the stereotype, saying, “I knew the mom was going to be uptight. It’s just dancing.” To which Emet says:

“That is not just dancing… that was actually the most disturbing display of child gyrating I’ve seen since Sia made that little girl dance in a cage with Shia LeBeouf. And by the way, these costumes? Wow! These are exactly the kind of clothing that makes juries unsympathetic to victims, so yes, I’m all up in the tightness.”

We have a few things going on here — the first is that that jury joke is tough and may not have landed on network television ten years ago. The second is that Emet is fine being a stereotypical uptight nag if it means protecting her daughter from growing up too fast. Emet embraces the stereotype because she’s not nagging at all — she’s just being a parent. Emet gives a big middle finger to the idea that a woman expressing herself is a woman who should keep her mouth shut. Sorry, child dancer, but these children don’t need to be sexualized at such an early age.

Later, Emet apologizes to her daughter for her reaction, but not for her concern, and the world kept spinning on, because Emet doesn’t stick to the patriarchal notions of what a woman should be. She doesn’t want her daughter to do that either, and so she remains herself.

Cable and streaming networks are free to show nudity and curse and follow more intense storylines because they are held to a different kind of standards and practices. For operating within the tight confines of what network television can show and do, I Feel Bad is a progressive addition to the TV landscape, joining shows like black-ish and Fresh Off The Boat in making thoughtful points on race and gender and how it all intersects with the world at large.