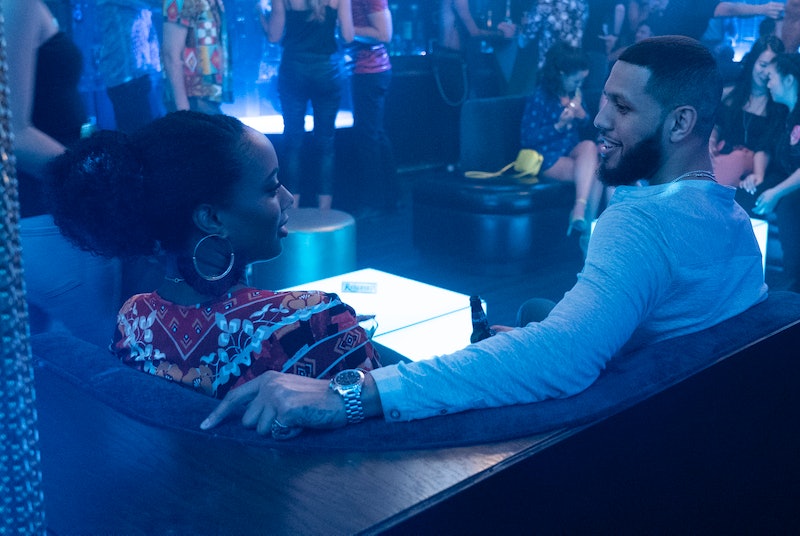 Malika hasn’t had much fun on Good Trouble. She’s dealing with a lot, like a drug-addict mother who still blames Malika for calling Child Protective Services on her and getting Malika and her brother put in foster care. She is one of the faces of a major police brutality trial and is always working at a restaurant to pay the bills. She’s trying to keep herself centered in the midst of chaos, and luckily Sarunas J. Jackson's Good Trouble character has showed up to show her a little fun and love.

Jackson plays Isaac, a neighborhood hot guy that Malika meets after he doesn’t swipe right on her on Tinder but does come into the bar in which she works. She gives him crap because she wasn’t good enough for him when he was on his phone, they talk about romantic movies, they reenact Love & Basketball, and there’s a spark. Hooray for Malika getting some action and getting out of her head, huh? And right now, Isaac and Malika are the only “couple” (they haven’t really defined the relationship yet, but for argument’s sake) that are getting closer instead of splintering.

Both Isaac and Malika seemed hesitant to open up to each other in the beginning, but Davia’s birthday party seemed to cement these two. It’s certainly a nice balance for everyone else who seems hell-bent on being alone for the rest of their young lives.

If you’ve been watching Good Trouble and thinking that Jackson looks familiar, you may recognize him from HBO’s Insecure, on which he plays Alejandro 'Dro' Peña, who has an open relationship with his wife and an on and off thing with Molly. Jackson can also be recognized for roles in movies like Chi-raq, and he’s set up to star in the new miniseries Games People Play, coming later this year. Jackson also has a basketball background — according to an interview with The Undefeated, the six-foot-eight star spoke of his time playing with now-NBA star Paul George. “It was easy playing with guys who know how to play ball,” he said. “You come down, hit the trail, P.G. is going to hit the shot or go to the rack. It was easy basketball with guys who know how to play the game.”

Now it definitely makes sense why Good Trouble went through all that trouble — pun intended — to have Isaac and Malika play basketball, doesn’t it? Jackson was never drafted into the NBA, but he played professional basketball overseas before coming back to the United States to pursue acting.

When he’s not acting, it seems, according to his Instagram, that he spends a lot of time with his baby daughter, Zen. And let’s be real — he’s probably shooting some more hoops between scenes, too. Jackson’s Isaac seems the perfect foil for Malika to let her hair down, so let’s hope that Good Trouble keeps on ‘shipping this couple as much as the rest of us.