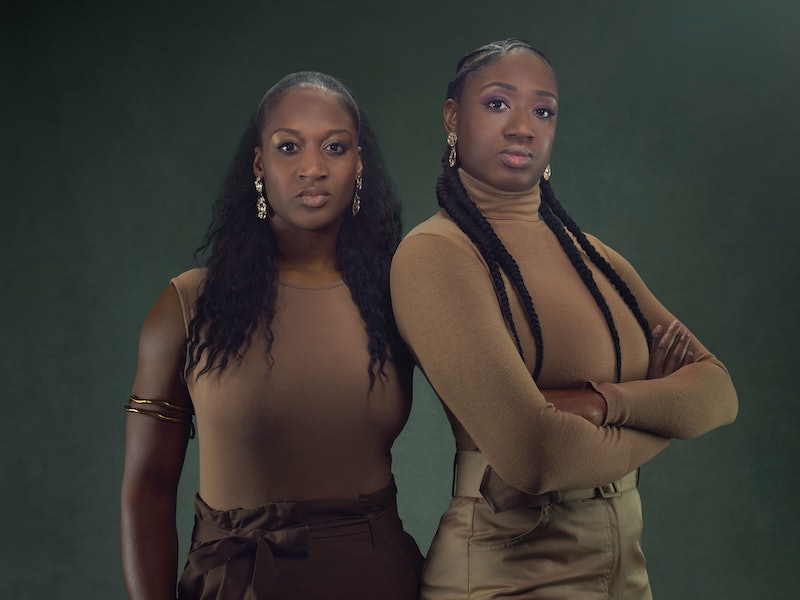 If you've ever told anyone you play netball, there's a 50% chance it will be followed by someone shouting "PIVOT!" in a Ross-from-Friends voice while stamping one leg and standing on the stop. And guys, not to bum you out, but it turns out that this kind of thing even happens when you're an international England netball player too. "We're so much further than that," netballer Kadeen Corbin tells me over the phone, together with her sister Sasha. "My friend still does it and I don't think she realises she's being disrespectful." Elder sister Sasha adds that "the worst one for me, is [people asking] 'is it a real sport?'" Shout it loud for the cheap seats in the back: a thousand times, yes.

Sasha and Kadeen Corbin are part of the generation of netballers who helped propel the sport to the big time. Graduates of Bath University, both have represented their country on numerous occasions and Kadeen was part of the squad that won Commonwealth Gold in 2018. The 2019 World Cup is currently taking place in Liverpool, and while Kadeen and Sasha won't feature on the court this time, they're doing important work off it to raise the profile of the game. Their BBC podcast NetBallers deals with everything from netball rage to pre-match poos. I sat down with them to chat about that Commonwealth victory, what it'll take to make netball an Olympic sport, and why they think we need more male players in netball.

CO: Kadeen, how did it feel to be part of the Commonwealth winning squad?

KC: It felt great. It felt so good. Especially because we were so far away from home. It was in Australia and everyone knows when it comes to an England Australia game, a lot of people love Australia. Now the tables have turned, and now it's just going to be so competitive going into this world cup. Just to do it in their own home... it was absolutely fantastic.

CO: That team talk during the Commonwealth game was so inspiring, and very powerful to see women talk to each other honestly and unapologetically, away from the genteel oranges at half time version of women's sport. How did that feel?

KC: You are backing each other up. We are there for one another. I think at that moment, it was just another energy that came in and everyone just went as hard as they could. If you can go as hard as you can for that last 15 minutes, you're literally putting your body on the line and you want to come out and feel why you did that.

I think at that moment that speech was absolutely key. Because we were seven down and actually we needed to push our way back in. And it wasn't just about the seven that were on the court. It was absolutely every single person that was a part of that team. We had to be hard women for the girls on the court. We had to feed them the energy and they feed us back and we just keep going. It's like a full on circle.

CO: If you had daughters, would you want them to be involved in the sport?

SC: We were never just netballers. Our parents put us into multiple of sports and by the end of it, we chose netball but other than that, we always want to have the variety because in every sport, there's something different about each sport that you can bring into another sport. It's always having that multiple choice and then by the time you are an age that you can actually choose.

But we obviously chose netball. I wouldn't change my whole upbringing when it comes to sport because I feel like it's given me a path of where I am now. The strength and the ability that I have has actually come from so many other different sports.

CO: You both went to Bath and played for Team Bath. How was that experience?

SC: I wasn't going to go to university at first but I actually got scouted to go to the university. That was a really cool opportunity, very nerve-wracking. I didn't want to leave London. Sometimes we'd have to obviously find that balance for studying, but I thought it was a great environment, fantastic facilities, and I was able to learn how to be an athlete just all by being in that university.

CO: Do you aspire for netball to become an Olympic sport?

KC: That's our dream. That's what we want.

SC: I've always said and always said one of our dreams growing up was to be there at the Olympics. I think at the time it was probably more athletics. It's what you look at as a child and say, "Oh my God. That is an amazing place to be." If netball could actually feature at some point in the future in our lifetime, we'd love to see it. Because we know we're not going to be there playing,

KC: But if we're all retired at that point I will come out of retirement [laughs].

SC: We want to see like Russia, China [start playing]. Those countries are the bigger countries that actually, in the Olympics, get the majority of medals. If they don't see that sort of country, that's why they haven't pursued it [as an Olympic sport]. But they are slowly getting netball in. America's got netball teams in the country and is now trying to get that international status. If they can get that, I'm sure we can see it. I'm hoping in the next 10 years.

CO: Is there camaraderie amongst the women's international teams across sport?

SC: You know what's really interesting, even if you don't actually know them personally, you do still connect, like, on social media and things.I love that you can actually use social that way. When we see them at different functions, we really do talk.

CO: Do you think we need to get more men involved in the sport as allies to help raise its profile?

They are more physical, they're stronger, they're powerful, they can jump higher. It's a completely kind of almost a different game. I think it's exciting in its own right and it would be great to see more of it playing and just more people playing in general. Mixed teams are out there. I know there's always a bit of banter with them and sometimes the girls don't really enjoy it as much, often saying "What are you doing? You don't understand the rules!"