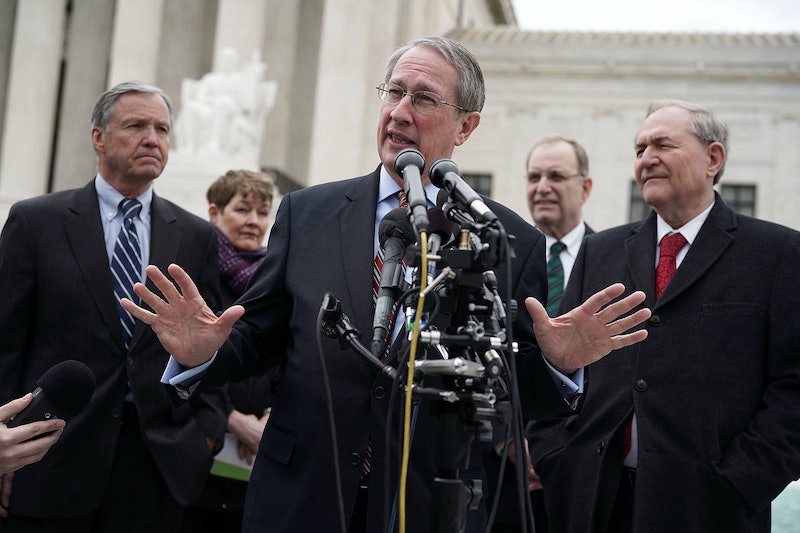 Tragically, Native American women face alarming levels of violence. Indeed, indigenous women have an estimated murder rate that is 10 times the national average, the Indian Law Resource Center noted. A federal bill, Savanna's Act, would address violence against Native American women by improving the federal government's response to related crimes. However, one lawmaker, Republican Representative Bob Goodlatte of Virginia, is reportedly preventing this bill from moving forward, according to HuffPost.

The HuffPost noted that it's not clear why Goodlatte may be preventing the bill from moving forward. When commenting on the matter, a Judiciary Committee aide told the outlet that, "We have been working on this bill in order to advance it, including working with DOJ and stakeholders to address issues with the language." Bustle reached out to Goodlatte's office and the House Judiciary Committee for comment, but both voicemail boxes were full.

As the Pacific Standard reported, Savanna's Act is named after a 22-year-old Native American woman who was killed in 2017 when she was eight months pregnant. The bill seeks to diminish crime in Native American communities by improving how data on crime victims is reported and how missing persons cases are handled. The magazine noted that part of the goal of the bill is to reduce violence against Native American women, since the National Institute of Justice indicated that 84 percent of them endure violence in their lifetimes.

Savanna's Act passed the U.S. Senate unanimously. However, as the HuffPost noted, it is currently stalled in the House. The outlet indicated the bill must first pass through the House Judiciary Committee, which Rep. Goodlatte chairs, in order to move forward.

On Dec. 13, Senator Heidi Heitkamp, the bill's Senate sponsor, also suggested that Goodlatte was holding up the bill — and took him to task on Twitter. As the Senator wrote:

@RepGoodlatte is blocking my bill, #SavannasAct, from moving forward. Call his office at 202-225-5431 to urge him to support this important legislation that would help address the epidemic of missing & murdered Native American women across our country.

Heitkamp also released a statement in which she chastised Goodlatte, HuffPost reported. "My bill is being blocked from a vote in the U.S. House because of petty partisan games being played by one individual," the senator noted. "Unlike Congressman Goodlatte, I am serious about saving lives and making sure Native American women are invisible no longer ― and I’m determined to not let Savanna’s Act go down without a fight." She also implored other members of Congress to "put pressure on him [Goodlatte]."

AlterNet also noted that it's not clear why Goodlatte is supposedly blocking the bill. However, if he does prevent it from moving forward, this would not be the first time the congressman has opposed legislation offering protections from violence for Native American women. The outlet reported that, back in 2013, Goodlatte voted against the reauthorization of the Violence Against Women Act — a reauthorization which included a Heitkamp-sponsored measure to extend protections to Native American women.

The Pacific Standard indicated that, if the bill doesn't pass by the end of the year, it will have to be reintroduced in January. For Heitkamp, who lost her bid for re-election in November and resultantly will not be returning to Congress, this is unacceptable. "We are so close to passing this critical bill to help address the crisis of missing and murdered Native American women, and getting it signed into law," Heitkamp said in a statement via the magazine. "And the actions of one congressman shouldn't stop us ... "