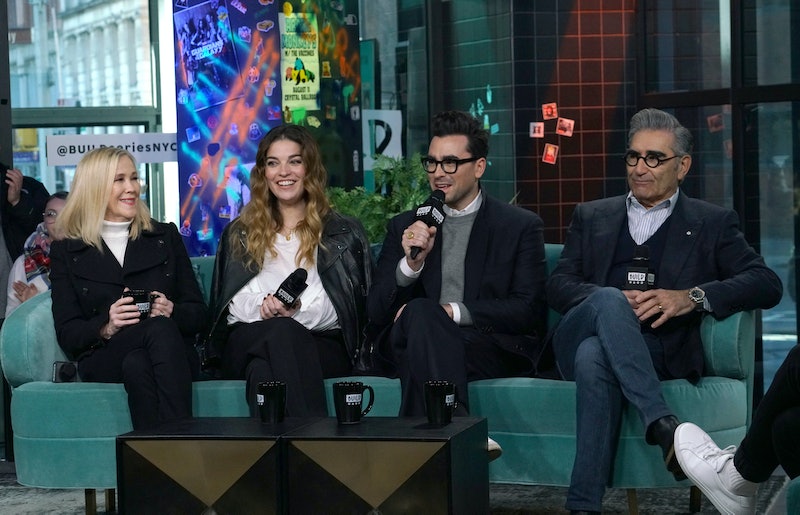 It's almost time to say goodbye to the Rose family (and Moira's outfits) on Schitt's Creek, and, though fans might not be ready, even they have to admit it's as good a time as any. Schitt's Creek isn't be returning (at least in the near future) after the highly anticipated series finale airs on Tuesday, April 7. But fans can take comfort in the fact that co-creator, showrunner, and star Dan Levy is ending the show on his own terms — and he's got some exciting new projects on the way to fill the Schitt's Creek hole in your heart.

Fans found out about the cult classic show's fate in March of 2019, when Levy posted a note on Twitter announcing that the sixth season of Schitt's Creek would also be its last, a decision made by Levy himself well in advance. "We are so grateful to have been given the time and creative freedom to tell this story in its totality, concluding with a final chapter that we had envisioned from the very beginning," he wrote. "It’s not lost on us what a rare privilege it is in this industry to get to decide when your show should take its final bow."

And if the right story comes along, the cast may not fold (in the cheese) just yet. Much like how Levy ended the show, if he decides to revive the show, it'll be on his own terms. "If an idea crosses my path that I feel like is deserving of our cast’s time, then let’s do it," Levy told Variety about a potential Schitt's Creek reboot. "I would love to revisit these characters, and I would love to get to play with this cast again."

Since the bittersweet announcement of the show's end, fans have been remembering the many beautiful things that the cult classic show has given us: Moira's wonderous wall of wigs, David and Patrick's groundbreaking relationship, and perhaps most importantly, the iconic reality TV hit that is "A Little Bit Alexis." But of course, this will not be the last that fans see of any of the beloved cast members. Annie Murphy has landed the lead role in the upcoming AMC show Kevin Can F*ck Himself, while Levy will be seen onscreen in the Kristen Stewart-led gay rom-com Happiest Season. But he'll have an even bigger job behind the camera soon.

Levy recently signed a huge multi-year deal with ABC Studios, where he will develop and produce multiple scripted projects for the studio. "As I say a bittersweet goodbye to Schitt’s Creek, I look forward to the opportunity and privilege to continue to tell inclusive and meaningful stories that shine a positive light out there," he said in a statement of his future projects, as per Variety.

While fans wait for these projects to come to fruition, hopefully Schitt's Creek will finally receive some love during Moira's favorite season: awards.