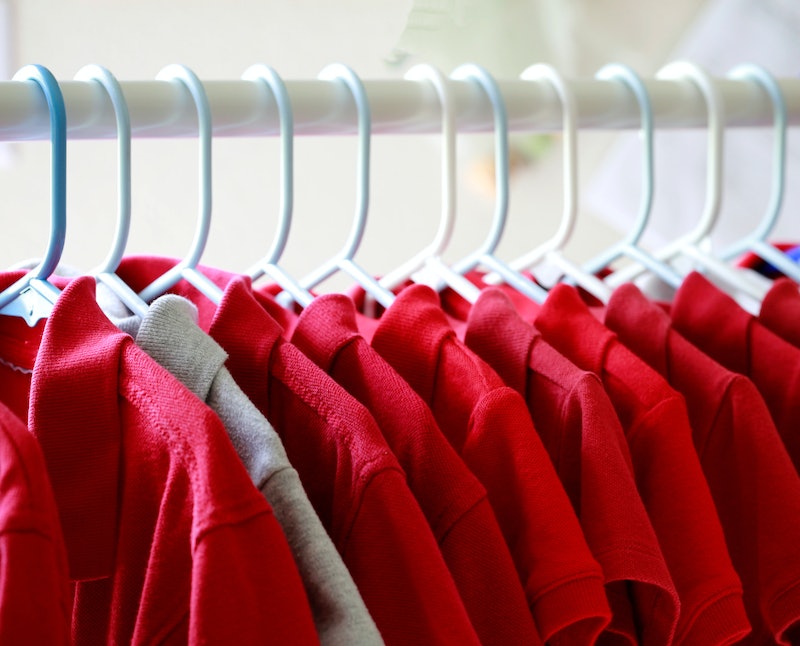 Most people probably wouldn't be surprised to hear that school dress codes unfairly impact female students, but the potential side effects of strict dress codes are worse than we thought. A new report released by nonprofit organization National Women's Law Center says that dress codes aren't simply sexist or misogynistic — they also disproportionately impact Black female students in a number of different ways. The study is co-authored by 20 Black girls who go to school in the Washington, D.C. area, and they share their infuriating experiences with school dress codes. The research also explores how sex and gender affect dress code enforcement.

Why are Black girls affected more by school dress codes? One known issue: Black hair is often deemed "unacceptable" or "distracting" because of subconscious bias. A study from The Perception Institute found that white women think of natural Black hair as less attractive and less professional, and that sometimes translates to dress codes. According to NPR, a Maryland school faced criticism in 2017 for banning braided weaves in its dress code. This study's findings reinforce what many Black girls and women already knew, and it's a reminder that institutions need to do better. From the study's summary:

Students report that Black girls, and especially curvier students, are disproportionately targeted. Disturbingly, schools tell girls they must change in order to avoid "distracting" their male classmates — or to avoid being sexually harassed. These punishments interrupt girls’ educations while sending dangerous messages to the school community: how a girl looks is more important than what she thinks, and girls are ultimately responsible for the misbehavior of boys.

It's important to note that the study authors didn't ignore that dress code rules disproportionately affect female students, regardless of race or ethnicity. The study's authors talk about schools banning tank tops and leggings and having rules about skirt length while allowing male students to wear whatever they please. But researchers note that Black girls are nearly 18 times more likely to be suspended from D.C. schools, partly because Black girls and women are often hyper-sexualized. A study from Georgetown Law found that Black girls are often viewed as older and less innocent than white girls, and this starts as young as 5 years old.

Suspensions may not seem like a big deal, but nothing happens in a vacuum. When students are suspended, the study says, they're at a higher risk of not graduating high school, which leads to them earning less money as adults. Additionally, Black girls may end up feeling insecure as a result of being singled out. "Even apart from lost class time, discriminatory dress codes and unfair enforcement change how Black girls see themselves and how their classmates see them, too," the report notes. "Studies show school practices that draw distinctions between students cause young people to form biases based on how different groups of students are treated.

And being culturally discriminative is an issue, too — banning students from wearing head wraps or combs in their hair, for example, leads to Black students feeling attacked. And dress codes often reinforce false gender binaries, which means that transgender, nonbinary and gender fluid Black students are under more pressure than any other demographic. Here's an excerpt from the study that explains why:

Stereotypes may presume that girls should wear feminine skirts, while boys should be active and athletic in pants. These rules also can present obstacles for transgender students whose schools do not respect their gender identity, as well as nonbinary and gender fluid students.

If you're infuriated and want to see things change, you can reach out to your local school district and inquire about their dress code rules. The National Women's Law Center has a specific list of action items that schools should take if they aren't willing to abolish dress codes altogether. A summary of their recommendations is below.

If our activism and feminism aren't intersectional, it isn't worth much. When we talk about the harm of dress codes, we also need to consider how Black girls are singled out and how it can affect us for the rest of our lives.