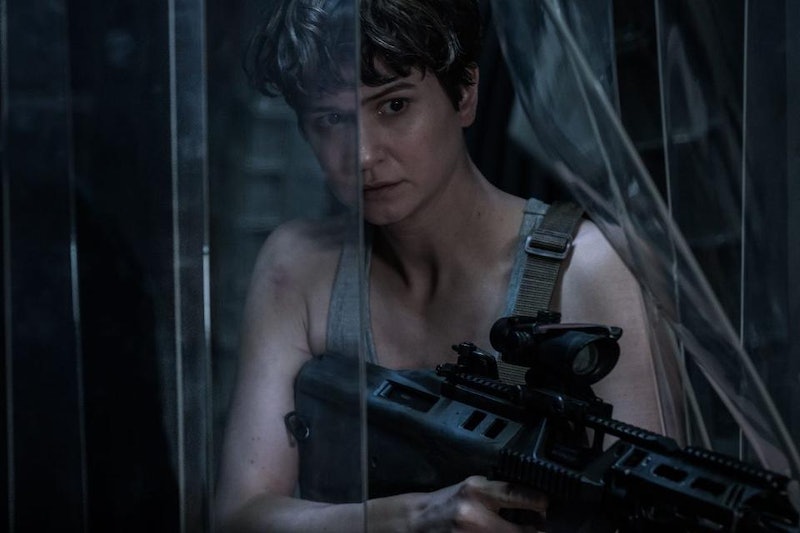 When it comes to awards season, movie fans have a lot to look forward to. This is the time for catching up on holidays films and watching your favorites rack up trophies during the various ceremonies. But thanks to the dreaded dump months of January and February, seeing new movies is less likely, as most good films are saved for later in the year. But that doesn't mean there aren't already many upcoming 2017 movies to get excited about. And interestingly, according to a new report released by Rotten Tomatoes, there's one genre in particular that people are the most excited about this year: sci-fi.

In an emailed press release, Rotten Tomatoes detailed that the top five most anticipated movies of 2017 are: Star Wars Episode VIII, Blade Runner 2049, Alien: Covenant, Guardians of the Galaxy 2, and War for the Planet of the Apes. Not only are all of these films part of already existing franchises, but they're all science fiction. That makes my little sci-fi loving heart really excited, but it also raises a few questions.

Formerly a mocked genre of B movies and excluded from prestigious accolades, science-fiction cinema has seen quite a resurgence in recent years. With intelligent sci-fi movies like Gravity, Interstellar, and Arrival coming out, the genre is being taken more seriously, not only by earning the big bucks but also by being nominated for awards.

“As critics look at 2017’s slate of sequels and adaptations, the new chapters in classic franchises are the films that have caught the most attention,” explained Rotten Tomatoes Editor-in-Chief, Matt Atchity in the release. “George Lucas and Ridley Scott brought new respect to the oft-maligned science fiction genre in the 70s and 80s, so it’s easy to understand why the latest chapters of Star Wars, Blade Runner and Alien are generating the most excitement."

Science fiction movies have gotten so good in recent years, it seems, that audiences and critics are embracing them more and more as quality cinema. Therefore, sci-fi films have become the types of movies audiences now respond to, and with geek culture coming out of the woodwork and hitting the mainstream, it feels like we've entered into an era when sci-fi will be taken more seriously by critics.

But there also might be another reason why these are the films that folks are gravitating towards in 2017. Audience demand for stimulating and impressive visuals is at an all-time high. With home theaters becoming more high tech, streaming options increasing, and frustration with the culture of movie-going (high prices, cell phones, etc.) growing, audiences are looking for something pretty specific when they go to the movies, and that's to be wowed. It's why someone might opt to go see a big budget, action film despite its mixed reviews, rather than a prestigious serious drama.

There's also the nostalgia aspect to factor in. Thanks to the Star Wars, Blade Runner, and Alien franchises, many 2017 movies are part of already well-known and well-loved series. People who say they are most excited about these films might be harking back to their childhood love of the originals, and studios bank on the tug of emotional heart strings.

Perhaps this list of 2017's most anticipated movies means the dawn of a new era for sci-fi movies, or it might just be another example of big budget populist popcorn movies getting box office love but being ignored come awards time. We'll have to wait and see how they are all received, but it sure is an exciting time for sci-fi.