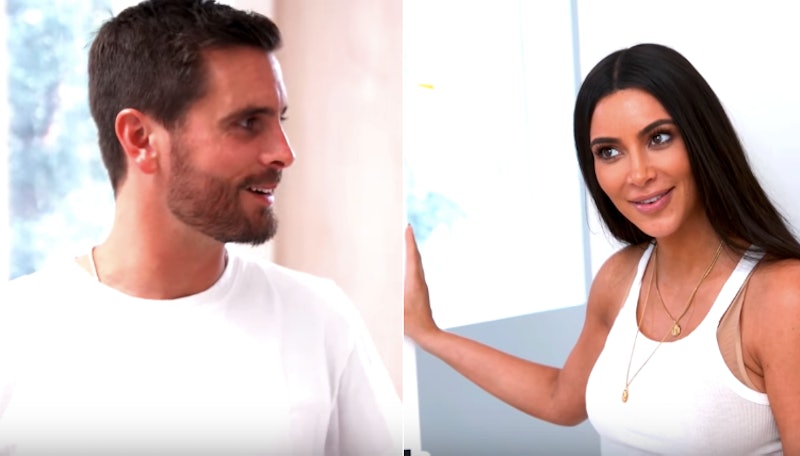 Scott Disick's been out of the Kardashian loop lately. Apparently, Disick didn't know Kim Kardashian was having a third child. A clip from Sunday's upcoming episode of Keeping Up With The Kardashians (executive producers: Kris Jenner, Farnaz Farjam) shows a very awkward interaction between Kardashian and Disick. It looks like not one of the Kardashian-Jenner family members let him in on the baby news — so he was left wondering why Kardashian wanted to refashion a room in her home into a nursery.

In the clip E! posted to YouTube Wednesday, Disick doesn't understand why Kardashian is taking such an interest in the remodel. "I'll be quite honest, I don't even know what this room is," Disick tells Kardashian. "A nursery," Kardashian responds, possibly not grasping the fact that Disick has no idea what's going on. "So, like, the little open tub, crib..."

Disick reveals that he truly doesn't know about the situation, though, asking Kardashian, "Do you really think you need to worry about redoing these cabinets if this is going to be a nursery for a kid that you don't even have?" When Kardashian responds, "Yeah!" Disick asks if she's pregnant.

"Is this a joke?" Kardashian responds. "Do you not know we're having another baby?" His answer? "Not really," along with a vigorous head shake.

"Scott, we're having a baby in, like, a couple of months. I'm dead serious. No, I swear," she tells him. Disick responds by asking if she's "not carrying it" while gesturing towards her stomach. "No, I'm not. We went the surrogacy route. I never had this conversation with you?" she says.

Eventually, Scott walks out of the room, declaring, "I don't know what's going on anymore," after asking — again — if it's a joke.

Disick and the Kardashian-Jenners haven't exactly been on as great terms lately as they once were, but this clip shows just how distant the relationship has apparently become. On an episode of KUWTK that aired last month, Disick had an "episode" after learning that Kourtney Kardashian and her boyfriend, Younes Bendjima, were getting more serious. In the end, it was clear that they were still working together and co-parenting, but it was made clear that he did not take the news well.

There's also the fact that Kendall Jenner dissed Disick's relationship with Sofia Richie on Instagram at the end of January. A fan account shared a photo of Disick, Richie, and his children with Kourtney in a car, and Jenner commented, "awww scott and his kids," along with a smiley-face emoji. Disick and Richie do have a significant age difference, but it was surprising to see a member of the Kardashian-Jenner family criticize him so directly, especially in a comment that could quickly go viral, thanks to screenshots.

Could the news about Disick being in the dark when it came to Chicago West cause an even further rift between him and the Kardashian sisters? The full episode doesn't air until Sunday, so fans won't know until then whether or not there's more to the discussion. Maybe Disick will ask Kourtney why she and her sister didn't tell him about the baby on the way — it would certainly be interesting to hear their responses.

Either way, though, Disick and Kourtney have children together, which means they are Chicago's cousins. They will surely play together as they get older, so Disick will certainly get to know her as time goes on — even if he didn't know she was on the way.