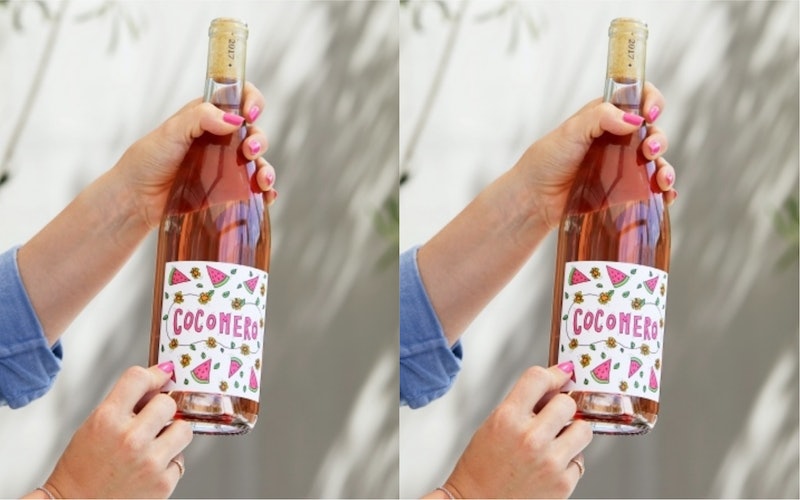 The “rosé all day” lifestyle trend has resulted in a market glutted with pink wines — but one winemaker has found a creative new way to stand out from the pack: Winc's Cocomero rose wine has a scratch-n-sniff label on the bottle. It rewards those who give it a scratch with a burst of watermelon-scented glory, and, well… let’s just say that I know exactly what I’m getting the next time I buy a bottle of rosé. It’s currently available at Winc, but you might want to act fast — I have a feeling this one will sell out pretty quickly.

The wine itself actually isn’t new; Cocomero has been making rosé in the Italian style for a few years now. As you might expect, though, the notes differ depending on the vintage: The 2015 rosé included notes of cherry, rose petal, and watermelon; for the 2016 vintage, the notes included strawberry, watermelon, and those little gummy peach ring candies; and the 2017 vintage’s notes include honeysuckle, rhubarb, and watermelon. You’ll notice that they all have one note in common — watermelon — and, indeed, there’s a very good reason for that: The word “cocomero” is Italian for “watermelon.” They’re also all dry, rather than sweet; however, the 2015 and 2016 vintages are both medium bodied, while the 2017 is listed as light. (Also, the 2015 and 2016 rosés are both sold out right now, so, y’know, fair warning about that.)

The 2017 vintage is also the only one with the aforementioned scratch-n-sniff label, which, although admittedly somewhat gimmicky, sets it a head above the rest. “The fun starts before you even open the bottle,” the product listing proclaims. “This wine has our first ever scratch-n-sniff label! Just smelling the fragrant watermelon will make you want to pop open the bottle immediately!”

For the curious, the technology used to make scratch-and-sniff stickers dates back to the 1960s, according to Mental Floss. That's when organic chemist Gale Matson, while working at 3M, created a process called microencapsulation. Microencapsulation enabled the creation of multiple copies of documents without the use of carbon paper: It involved two sheets of paper, one of which was coated with “microcapsules” containing colorless ink and the other of which had been painted with a developer chemical. The pieces of paper would be stacked on top of each other, with the microcapsule paper on top; then, when that sheet was written on, the capsules on the paper would break, allowing the ink to come in contact with the developer chemical on the bottom sheet. Et voila! Easily made, carbonless copies.

3M realized that Matson’s microencapsulation process could be used for substances other than ink, however — like, for example, scented oils. It turns out that if you coat a piece of paper or cardboard with microcapsules containing scented oils, you can release those scented oils by scratching the paper and bursting the microcapsules.

You can see where this is going, right? I mean, with technology like that, who wouldn’t want to put it on a sticker?

Some of the earliest scratch-n-sniff stickers were launched into the world by Creative Teaching Press. In 1977, the educational publisher introduced a number of stickers teachers could put on their students’ work to encourage and reward them. The stickers held messages like “Much Better!” and “Great Job!” — and also featured pictures of pieces of fruit or other treats. When students scratched them, the stickers would release scents corresponding to the pictures: A picture of a banana smelled like a banana; a picture of a candy cane smelled like peppermint; and so on and so forth.

Scratch-n-sniff stickers picked up speed in the ‘80s and continued to be popular throughout the ‘90s. While they’re no longer quite as pervasive as they once were, a lot of folks who were kids during those decades have fond memories of scratch-n-sniff stickers, whether they received them on their homework for a job well done or simply collected them, filling album after album with them. And now, grown-up ‘80s and ‘90s babies can revisit those memories with a boozy twist, thanks to Cocomero’s 2017 rosé. Heck, and yes.

It’s not clear which grape Cocomero used in the 2017 vintage, but the 2015 vintage was made from the Barbera grape — an Italian grape which, according to Wine Folly, yields wines that taste of red and dark fruits with a slightly herby quality. The low tannins and high acidity make these wines taste “juicy.” (Perfect for a summertime rosé, no?) According to Winc, Cocomero “[picks] the grapes and [presses] them immediately to ensure limited contact between the juice and the skins,” which gives their rosé its beautiful pink color; then, the juice is “cold-[fermented] in stainless steel.” (No oak here!) Winc suggests serving the 2017 vintage with shellfish, sushi, and fruits, but I imagine it would pair well with grilled chicken, white fishes, fresh vegetable dishes, and other classic summertime fare, as well.

Bottles of Cocomero’s 2017 rosé are currently available via Winc for $15 a pop. Head on over there to grab yours — and let the nostalgic fun begin!