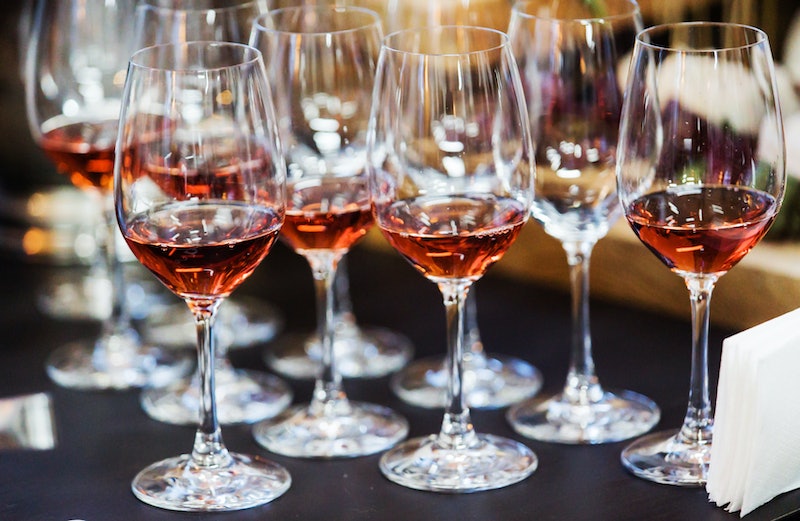 Over at Food & Wine this week, there’s a piece by contributor Henry Jeffreys titled, “In Defense Of Dark Rosé," which piqued my interest. I do love wine, and like many, I have a fondness for a glass of rosé in the summertime — but I still found myself thinking, “Dark rosé? What is dark rose, exactly?” I mean, clearly, it’s rosé of a deeper hue than what typically comes to mind when we think of rosé — think ruby or strawberry red wine as opposed to a millennial pink quaff. But I’ve never bothered to differentiate rosés based on their actual shade before, so I had no idea that rosés of a certain color were even in need of a defense.

It turns out, though, that there’s more to these pink-hued wines than meets the eye, with many persistent misconceptions hanging about that are due for change. Dark rosés, for example, are not inherently sweet; indeed, full-bodied and complex, they might be just what your summer wine bar has been missing all along.

Why have we been hearing so little about dark rosés lately? Simple: According to the wine experts Jeffreys spoke to, the general trend right now is towards lighter rosés. Master of wine Elizabeth Gabay told him, “Five or six years ago only a third of rosé was pale, now it’s well over half”; a spokesperson for Spanish winery Marques de Caceres confirmed that their Rioja Rosado “has moved to a lighter style in recent years,” which Jeffreys cites as an example of regions historically known for their darker rosés altering their output in favor of lighter-colored wines; and Anthony Lynch of Kermit Lynch Wine Merchant noted that Tavel, a variety of wine from Southern France long considered one of the best rosés in the world, is “having an identity crisis because its wines have lost their popularity and sell poorly.”

Indeed, while sales of rosé as a whole have been rapidly increasing — according to Nielsen figures from June of 2017, rosé grew a whopping 53 percent in volume sales over the previous year — it seems that some varieties sell better than others. Millennial pink is in; dark pink is out… even if the banishment is undeserved.

The lighter-colored rosés are generally Provencal-style: Pale pink, dry, crisp, and bright. Rosé actually makes up the majority of the wine produced by the French region of Provence — up to 88 percent, according to Wine Folly — and as rosé’s popularity has spiked in the United States, so too has Provence’s export figures for rosé. People like Provencal rosés because of how easy they are to drink — but that’s also why so many wine experts consider them to be less impressive than their darker cousins. As Grant Reynolds, wine director at New York restaurant Charlie Bird, told Alex Beggs at Bon Appetit in 2016, light rosés are best for “the pleasure of drinking something super cold and that gets you drunk.” Said Reynolds, “They're crisp, tall, boozy glasses of water that should go down only in the summer — and fast.”

Dark rosés, however, are often much more complex than lighter ones — and, contrary to popular belief, “dark” does not equal “sweet.” According to a 2015 piece in Saveur about how to judge a rosé based on its color, “The reality is that a quality rosé, even if it is dark, will contain neither added nor residual sugar” — and the sugar is what makes a sweet wine, well, sweet. What a dark rosé will typically have, though, is more body and notes of fruit than a light, dry rosé will — which, in fact, makes it better for pairing with meals. It’s why, as Vinepair notes, dark rosés might be referred to by their makers as rosé d’assiette — “rosé for eating” — or “gastronomic” wines. They’re often made with Grenache, Cinsault, and Syrah grapes, all of which lend a wonderful spice to the wine’s flavor profile.

Rosé can be made in several ways, according to Wine Folly. The maceration method involves pressing the grapes and letting the skins sit there with the juice during fermentation; the skins are then removed before the wine gets too dark in color. The vin gris method is similar; it keeps the maceration time super short. Then there’s the saignée method, which Wine Folly describes as “actually a by-product of red winemaking.” Writes sommelier Madeline Puckette, "During the fermentation of a red wine, about 10 percent of the juice is bled off. This process leaves a higher ratio of skin contact on the remaining juice, making the resulting red wine richer and bolder. The leftover bled wine or ‘saignée’ is then fermented into rosé.” Rosés made with the saignée method tend to be darker and more savory than rosés made with the other methods; however, you can still make dark rosés with the maceration method.

While light rosés are certainly refreshing, dark rosés are both refreshing and interesting — so if you’re looking for something that’s good for a bit more than just sipping by the pool, think about giving a darker option a shot. I hear that, due to their fuller body, they make terrific frosé. Just sayin’.