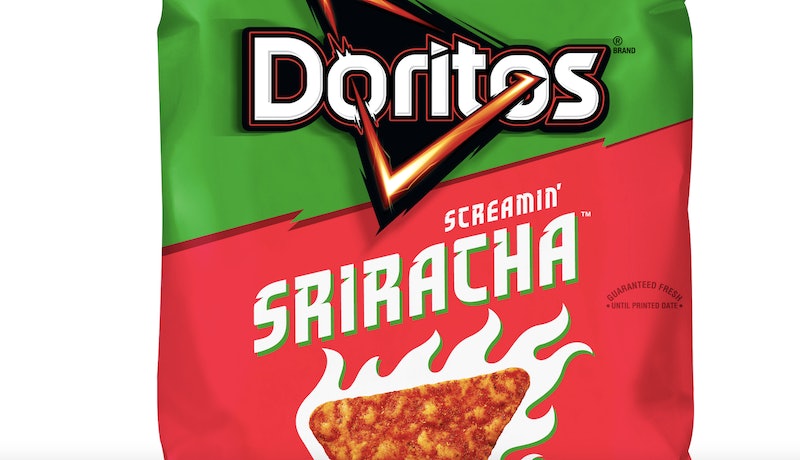 The mouths of mere mortals may be quivering today, because Screamin' Sriracha Doritos are officially hitting shelves in October 2019. The new flavor — which, according to Doritos, is a "perfect balance of punch and spice for bold, food-curious snackers" — comes in red and green packs emblazoned with a Doritos chip in white flames, and has been hotly anticipated since its initial announcement in July 2019. Now that they are on the way, they'll be retailing in stores nationwide in two sizes, a smaller and a larger bag, with suggested retail prices of $1.89 and $4.29. Be warned, though — this first-ever flavor for Doritos is only around for a limited time.

This isn't Doritos first foray into flavors that kick the spice up a notch, but it is certainly the first time it has paired up with the iconic sauce. But as any true sriracha fan knows, the flavor gets so loosely defined when it's paired up with other products that you can't always guarantee the spice level of it. Bustle had the opportunity to try the Screamin' Sriracha Doritos, and can confirm that they do have that very distinctive sriracha flavor — and the kick on these is real. It's spicy from the moment it hits your tongue, but noticeably spicier in the aftermath, when it gives way to a pleasant sriracha burn. That said, if you're someone who shies away from spice, this might be a Doritos situation you should consider sitting out.

The Screamin' Sriracha Doritos first caught the attention of the internet back in July, when popular food Instagrammer markie_devo shared an image of them on his account. At the time, commenters were wondering how they would compare to Flamin' Hot Nacho Doritos, a flavor that launched for the brand in January 2019. Those were described by Doritos as "the nacho cheese you love, amped up with fiery heat" — and for the curious who want to see how they compare, you can still buy Flamin' Hot Nachos Doritos online and in stores. As someone who tried them both, I'd say the only real standout was that the cheesiness of the nacho flavor is prominent in the earlier version, but that in terms of spice — and perhaps more importantly, in terms of the after burn of the spice — the two are comparable.

If you're looking for something to cool you down after eating either one of these, luckily, you're about to have other limited time offerings at your disposal — Coca-Cola Cinnamon and Winter Spiced Cranberry Sprite just hit shelves, and both seem like they'd have just the right amount of sweet-and-spice to temper the boldness of a Screamin' Sriracha Dorito. You can keep your eyes peeled for all three offerings on shelves this month, or diehard fans can check the “Find A Store” feature on Frito-Lay’s website for the Doritos. When it comes to both spice tolerance and in-store availability, I'm pretty sure the rule is, "Better safe than sorry."