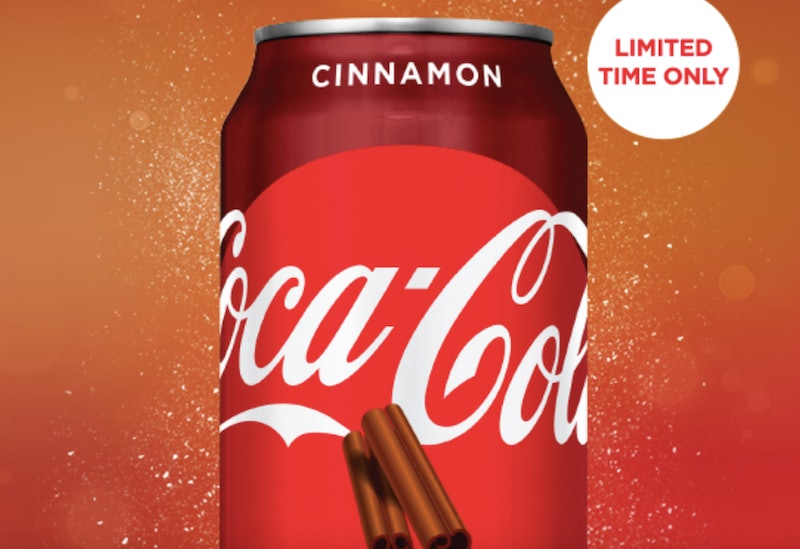 While you may be under the Pumpkin Spice Latte's spell right now, considering we only just started October, another holiday beverage may be here to give it a run for its money: Coca-Cola Cinnamon has officially hit shelves. Per Coca-Cola, it features "the original taste of Coca-Cola with a dash of delicious cinnamon flavor," and is available in as a 12-ounce bottle, in a canned 12-pack, in a 20-ounce bottle, and in 7.5-ounce canned 6-pack. Its limited edition run goes from Sept. 30 through Dec. 31, or while supplies last.

The news of the upcoming Coca-Cola Cinnamon flavor first hit the internet in early August 2019; popular foodie Instagram account @candyhunting announced, alongside a product image, that it was anticipated for fall. Those across the pond had already enjoyed a version of it last winter, in the form of Coca-Cola Zero Sugar Cinnamon, which was also a limited edition holiday offering. It seems it must have been a success, because this year the U.S. is getting its own cinnamon coke shakeup.

The packs should be available in all major retailers from its release date, so take a peek in your local store to see if they've hit yet — the packaging is festive as heck.

It's worth noting that these aren't the only holiday drinks coming out this year — a Winter Spiced Cranberry Sprite is also on the way. Similarly, it will run from Sept. 30 through Dec. 31 (or while supplies last), and will also be available in bottled and canned form. Per the Sprite website, it may have more of a kick than the cinnamon: "Unwrap the spiciest Sprite of the year," says the site. "Sprite Winter Spiced Cranberry infuses the crisp lemon-lime flavor of Sprite with a warm spice blend and tart Cranberry." Even if it doesn't end up being spicier, it sure did end up being a lot more aggressively holiday-esque — it comes adorned with little snowflakes on top and a new wintry logo.

In terms of holiday flavors, cinnamon may be having a moment this year. In addition to the launch of the new Coca-Cola flavor, Sweet Cinnamon Kit Kats are also arriving on shelves for a limited time. They'll be sold as Kit Kat Miniatures in nine-ounce bags that are expected to hit shelves in November 2019. And in case that's not enough for you to get your full cinnamon fix, you may want to head over to Cinnabon. Not only is the chain offering the iconic cinnamon rolls that you can smell from 15 stores away at the mall, but starting Oct. 4, Cinnabon has resurrected Cookie BonBites for a limited time, in celebration of National Cinnamon Roll Day. Cookie BonBites, for those unfamiliar, are giant chocolate chip cookies that have been stuffed with Cinnabon's BonBites, making for a delightful if not Frankensteinian delight.

But if you're just looking to drink your cinnamon this year, look no further than the Cinnamon Coca-Cola that's hitting shelves this week — just make sure to enjoy it while you can, because after Dec. 31, this drink will be as gone as 2019.

More like this
22 Movies On Netflix That Are Perfect For The Whole Family
By Bustle Editors
The 8 Best Chew Bones For Puppies, According To A Vet
By Andrea Hannah
Dunkin’s Pumpkin Spice Latte Is Officially Back This Week
By Mia Mercado
Lotus Biscoff Does A Biscuit-Chocolate Hybrid Now
By El Hunt
Get Even More From Bustle — Sign Up For The Newsletter