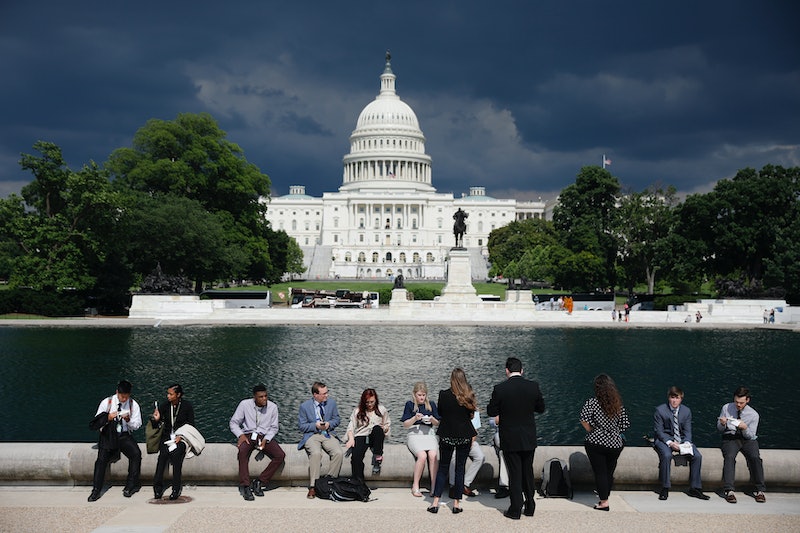 Rep. Sean Patrick Maloney had no idea he'd found his next fight when he purchased $37 worth of tampons for his congressional office. He thought he was simply stocking up on basic office supplies to be used by his staffers, constituents, and visitors. But the House Administration Committee told him that as a "personal care" item, tampons can't be included in his office budget. Now Maloney is fighting to bring free tampons and other feminine hygiene products to women on Capitol Hill.

"You may not know this, but the taxpayers pay for basic things in a congressional office," Maloney said in a video recently posted to his official Twitter account. These basics include things like hand sanitizer, paper towels for the bathroom, and a first-aid kit stocked with bandaids, according to the representative.

"Those items are paid for as part of my office budget," he said. "But you know what we discovered? We discovered that feminine hygiene products cannot be covered."

When Maloney submitted his budget expenditures to the finance office of the Committee on House Administration he said he was told via email that he'd need to reimburse the $37.16 his office had spent on tampons. "The office will need to reimburse the card in the amount of $37.16," a press release from Maloney's office alleged the email read. "Tampons are not an office supply but a personal care item."

That's bad news not just for Maloney's female staffers, constituents, and visitors, but for all women on Capitol Hill. While women have long known the high financial cost associated with having a period, not many men have felt the hit to their wallet. Research suggests that women spend thousands of dollars a year on period-related products and care. In fact, according to Global Industry Analysts, feminine hygiene products, including tampons and pads, represent a $5.9 billion industry in the United States alone in 2017.

"All sorts of members spend their office budgets on all kinds of crazy things — and you may have heard some of the scandals around that," Maloney said. "But the one thing you cannot do apparently in the House of Representatives is treat women with the same respect and dignity as you'd treat other employees or visitors."

"It is absolutely permissible to purchase necessary health and safety products to have in the office, especially in case of an emergency," The House Administration Committee spokeswoman said.

Maloney's office has since pushed back on the House Administration Committee's denial and released both his letter to the committee regarding the matter and the email a staffer from the committee's finance office sent to notify him of the rejected purchase.

"They're lying and backtracking to avoid admitting that they stand by and enforce this archaic, sexist policy," Maloney said in a statement. "They're blaming some bureaucrat under their own authority for enforcing a policy they created. That's pretty embarrassing, and it's shameful."

But while Maloney is publicly pushing for the Committee on House Administration to include tampons and other feminine hygiene products on the list of items congressional staffers are able to pay for using their allotted budget, he hasn't denied them their $37. He wrote a personal check to their office while recording his Twitter message about the issue.