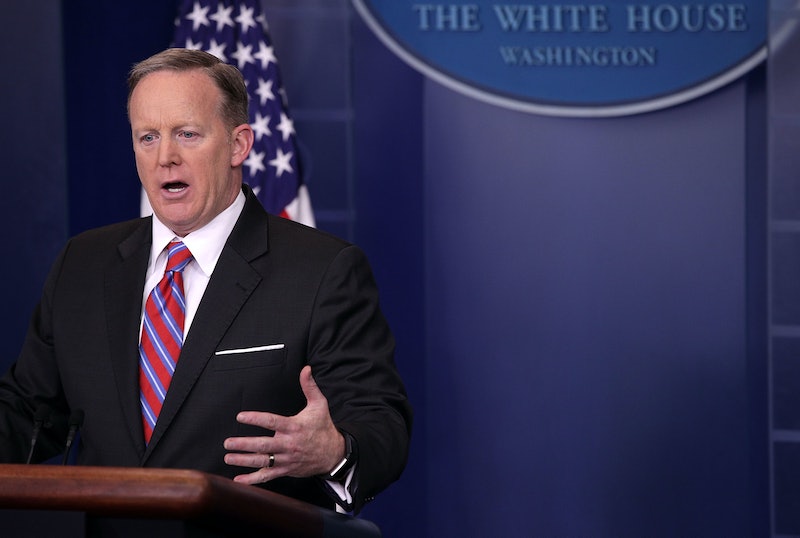 In the short time since Donald Trump took office, Press Secretary Sean Spicer has made waves as the sometimes-erratic liaison between the White House and the press. On Mar. 28, Spicer told April Ryan to stop shaking her head at him, thus furthering his contentious reputation with the press and the public. But the underlying implications of Spicer's offhanded remarks towards Ryan, a veteran Black journalist, go much deeper than just another reputation-damaging gaffe.

Spicer's insistence that Ryan, a White House correspondent for American Urban Radio Networks, stop shaking her head at him came in the midst of a contentious exchange, one that saw Spicer on the defensive to Ryan's questions about how the White House plans on responding to speculation about alleged Russian-Trump ties. In the extended video of their interaction, Spicer continually referred to Ryan by her first name, and at one point said that Ryan is "hellbent" on promoting her agenda.

The furor over Spicer's exchange with Ryan also came during a news cycle that heavily covered a racist comment made by Fox News' Bill O'Reilly towards California Rep. Maxine Waters (that O'Reilly has since apologized for). In tandem, the instances serve as stark reminders of the indignities Black women have expressed they face in the workplace. In response to the insults made against Ryan and Waters, many Black women on Twitter shared their own experiences with workplace racism and sexism with #BlackWomenAtWork.

There is no doubt that Spicer has treated other reporters disrespectfully, but the fallout from his defensive and unnecessary response to a fairly routine question about the president's public image is a reminder that this sort of treatment of Black women isn't unusual. In fact, Ryan has suggested this type of thing happens "behind the scenes"; America just doesn't always notice it.

During an MSNBC interview after Spicer's comments went viral, Ryan said that she was "roadkill" for the press secretary who aimed to paint his boss in a better light than most of the country views him. In an interview with The Washington Post, Ryan explained how Spicer's alleged mistreatment affected her and connected it to a bigger picture:

It was insulting but … people are seeing the treatment of the press and how we are treated. We know this, we see this behind the scenes. You got a glimpse of this on camera.

She went on to tell Washington Post columnist Erik Wemple that "I'll be back." Her resilience and the support she's received are a small silver lining on the issue of workplace disrespect that today's events brought to light.