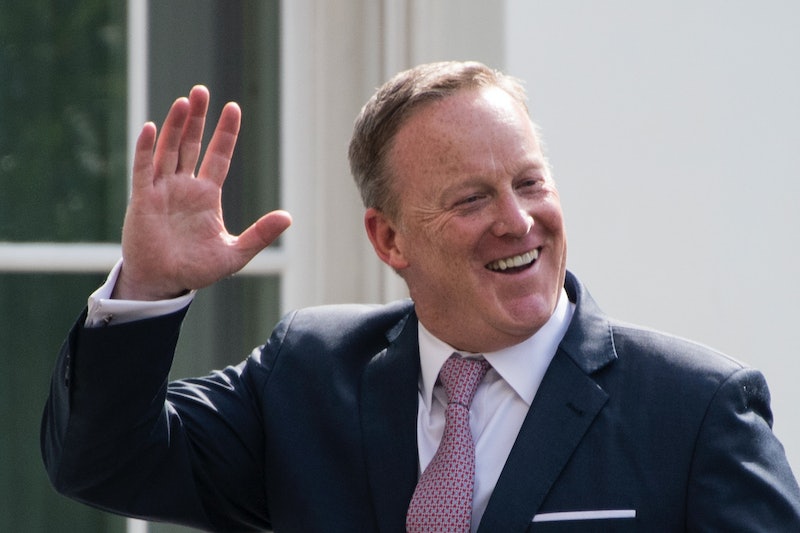 The former face of the White House communications staff may seem a little happier since he left his post as the White House press secretary, but perhaps not that much else has changed. Sean Spicer went on Jimmy Kimmel Live and even there, almost two months into his post-White House life, Spicer still talked in circles trying to explain why he straight-up lied on behalf of the president.

Jimmy Kimmel quickly jumped at his chance to grill Spicer on Spicer's first and most infamous lie, about how Trump's inauguration had garnered "the largest audience to ever witness an inauguration — period — both in person and around the globe." Although this was very obviously not true, Spicer made the claim during his first press briefing and, as Kimmel said, it "opened this terrible Pandora’s box" in terms of his relationship with the press from there on out. Although they had a chance to talk about several other subjects, Kimmel opened his line of questioning with that exact moment of Spicer's career, saying:

So, right off the bat, your first-ever press conference, you get in there and it's the day after the inauguration, right? And you are charged with the job of going in front of the press and saying the inauguration crowd was the biggest crowd ever. If it was up to you, would this have even been a topic?

Spicer didn't address Kimmel's question head-on, saying instead, "You know, if it was up to me I probably would have worn a different suit." Instead of referencing the lie, his comment referenced the joking he was subject to for what people saw as a baggy suit. Kimmel wasn't so quick to let Spicer off the hook, but as he dug in further, Spicer only continued to defend himself and the president by dodging the questions.

The president, Spicer said, just "wanted to make sure the record got set straight" as regarded crowd size, because he felt that the media had spent too much time undermining the validity of his election. The president makes the ultimate decisions about the statements that come out of the White House, Spicer said.

“Your job as press secretary is to represent the president’s voice and to make sure that you are articulating what he believes … whether or not you agree or not isn’t your job," Spicer responded.

Spicer then delved into a Kellyanne Conway-esque argument about disagreements over facts, saying that "sometimes we can disagree with the facts." When Kimmel pressed him on that point, asking if we could in fact disagree with the facts, Spicer said, "You can look at a set of facts and come out with one opinion, but someone else can say the facts are the same here and I come out with a different conclusion."

All in all, it was a friendly conversation, and Spicer seemed to be in good spirits. Still, though, it was clear that he's still in the business of defending his former boss. While he did seem to tacitly acknowledge that he knew that Trump had lied at multiple points, he never said that out loud. Thankfully, Jimmy Kimmel was there to make sure that everyone else knew exactly what was going on.

More like this
'The Undeclared War' Took Inspiration From This Gavin & Stacey Location
By Maxine Harrison
ITV’s Six Four Is Based On A Best-Selling Japanese Mystery Novel
By Sophie McEvoy
Howard Stern's Net Worth: Is He The Richest Man In Radio?
By Hugh McIntyre
Everything To Know About The Bear Season 2
By Brad Witter
Get Even More From Bustle — Sign Up For The Newsletter