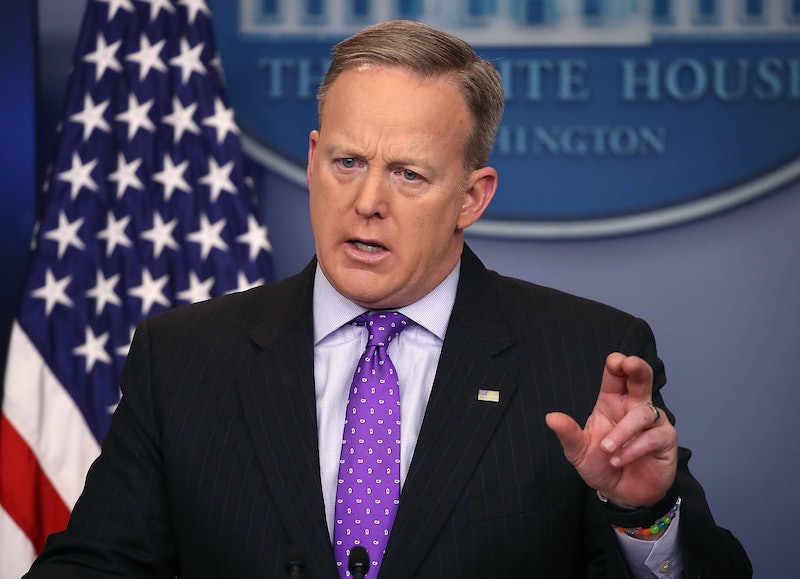 In today's edition of "horrific homeland terrorist attacks the mainstream media did not cover, because they did not happen," we have Sean Spicer's repeated references to an Atlanta terrorist attack that, naturally, never occurred. Spicer has since corrected this mistake, insisting that he meant to say Orlando, despite the fact that he said "Atlanta" three times in the last month.

Spicer's explanation is additionally flimsy because he used the Atlanta attack as justification for the president's travel ban, saying, "What would happen if we didn't act and someone was killed? Too many of these cases that have happened — whether you're talking about San Bernardino or Atlanta..." The implication, of course, is that the Atlanta "terrorist" was a foreigner who could have been prevented by the imposition of a travel ban. But Trump's ban would not have prevented the Orlando attack, which — the White House should know — was perpetrated by a native New Yorker.

This is the second made-up terrorist attack that Trump administration officials have repeatedly discussed, the first being Kellyanne Conway's Bowling Green massacre.

Let that sink in for a moment.

This is one of two terrorist attacks that was completely fabricated by the new administration. At this rate, it looks like we're at one per month.

Your chances of dying in a real terrorist attack, according to the National Safety Council, are 1 in 45,808, but with fake terrorism apparently spiraling out of control, who knows how long before you, too, perish in an attack that didn't happen?

Joking aside, it is difficult to overstate what a big deal this is. The administration is justifying its policies by describing terrorist attacks that never happened.

As eager as people are to ridicule these missteps on social media, we should also be deeply concerned about the spread of misinformation. Most Americans, understandably, are unlikely to fact-check every single piece of information they hear on the news and from the White House. If you reference an attack enough, as Spicer and Conway have, people will believe it happened.

The Trump administration has shown signs of promoting the same sort of false information about the crime rate. The president himself said Tuesday that "the murder rate in our country is the highest it's been in 47 years," which isn't even remotely true. According to FBI data, it's actually near a 45-year low. But many Americans hear Trump say these things and assume they're true.

One of the most disturbing things about the Bowling Green and Atlanta lies is the number of times each was repeated before the errors were called out. If you saw an interview with Conway or Spicer before they were confronted with the facts, you'd assume there was an attack you'd forgotten about. If the administration continues to be willing to invent facts in order to suit its agenda, Americans are in trouble.