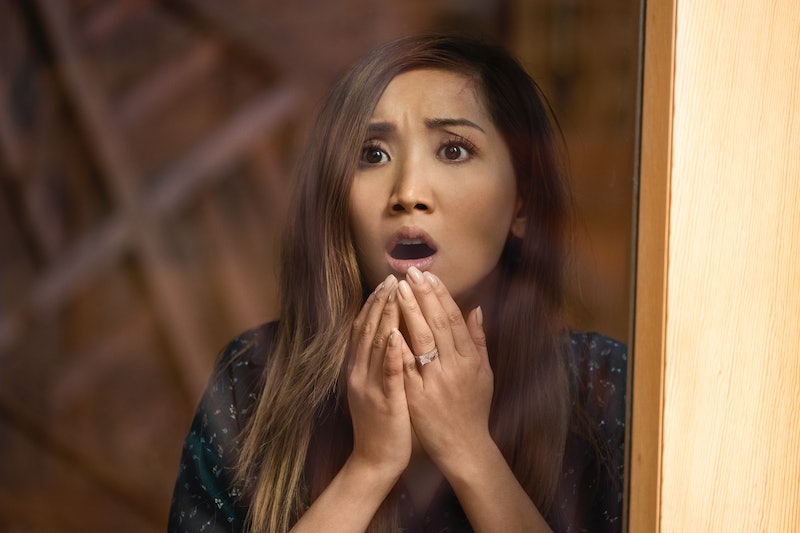 Major spoilers ahead for Netflix’s Secret Obsession. On the surface, the new thriller Secret Obsession seems like your typical stalker flick about an obsessed man who will do anything — including kill — to continue his delusional love affair with Jennifer (Brenda Song), an unsuspecting woman who barely knows he exists. But Song tells Bustle that her new film also tackles topics like twisted perceptions of love and how some people use stereotypes to their advantage. For the actor, Secret Obsession is about trusting your gut instinct when red flags arise in a situation that seems too good to be true... and surviving against seemingly insurmountable odds.

“When she first starts feeling like things aren’t right, she doesn’t listen to herself," says Song of her character, speaking over the phone before the film's release. When the film begins, Jennifer is hit by a driver while she's running from an anonymous attacker. She wakes in a hospital with no memories of her past, but her husband, the attractive and sweet Russell (Mike Vogel), is by her side as she starts to heal from her physical wounds, including a badly damaged ankle. The pair soon return to their sprawling home in the countryside and Russell caters to his wife’s every need. "Everything he’s saying is right but she has that gut feeling that won’t go away," Song explains.

She believes that this movie will ring true to many people, who, like her character, forget to trust their own perception in a potentially dangerous situation, especially when everything seems to make sense.

Jennifer is suspicious about Russell’s explanations for her lack of friends and family and their isolation from society, but she initially brushes off her own concerns. "I think not just women but people should follow and listen to that gut feeling more because that feeling comes from somewhere," says Song. "I think that’s what Jennifer ultimately does, and instead of listening to what he is saying, she listens to what her mind and body and heart are telling her."

Jennifer starts to investigate Russell and her memories are triggered, which leads to the devastating discovery that Russell is actually Ryan, an obsessed former co-worker whose jealousy drove him to murder her husband. Thankfully, Jennifer finds out just in time and is able to save her own life, but her fictional story is a reminder that your inner voice exists for a reason.

Trusting that internal guide also means looking past a person's exterior and directly at their actions. Song thinks casting Vogel, who has previously portrayed love interests and heroes (The Brave, The Sisterhood of the Traveling Pants), allowed the film to explore society’s assumptions about who “looks” like a dangerous person. And, according to science, she isn't wrong. Per an Insider report, attractive people are seen as more honest, competent, and trustworthy, which may explain why Russell was able to convince several officers and hospital staff that he was actually Jennifer's husband, without providing any proof.

Secret Obsession drives home the reality that "'killer' doesn’t have a look,” Song explains. You can't tell the bad guys on site — they don't all "look like Charles Manson," she continues. “In the movie, there’s this other character checking up on Jennifer, and people assume that he is bad because he’s the stereotypical look. But he’s not the killer.”

Jennifer may go through a horrifying ordeal after enduring a traumatic injury, but Song reveals that her Secret Obsession filming experience was the opposite of that. She's previously starred in lighthearted shows such as The Suite Life of Zack & Cody and New Girl, so it was a challenging yet rewarding opportunity to lead a dark thriller for the first time. She says that Vogel and writer/director Peter Sullivan (who is behind many of Lifetime’s Wrong movies) made sure her suggestions were incorporated into the script and that she felt safe and comfortable while portraying a character who doesn't have control over her circumstances.

“I was really lucky to have these two guys who at every moment were like ‘Are you okay? Do you need anything?’” says Song. “What’s wonderful about that for me is that I didn’t have to worry about my safety. I could just fully focus on the scene and letting myself be vulnerable and I didn’t have to worry about all that other stuff because I knew I was working with people who were taking care of me." In her experience, "it’s not always like that [on a set]," the actor continues. "Anytime I even questioned something, we would work it out."

Song trusted her instincts on set and it paid off, just as it does for Jennifer, who's able to reclaim her life. Ultimately, the actor wants Secret Obsession to not only make viewers think twice about how they look at other people and how much faith they put in their own instincts but also entertain them. There's a thin line between love and infatuation, and Secret Obsession is an extreme version of what can happen when it's crossed.

More like this
'That '90s Show' Star Callie Haverda Got Advice From Mila Kunis & Ashton Kutcher
By Brad Witter
At 28, Rosie Perez Risked Her Career To Stop Playing Stereotypes
By Gabrielle Bondi
At 28, Debra Jo Rupp Was Living A Much Different '70s Show
By Grace Wehniainen
'Bling Empire: New York’ Star Dorothy Wang Wants To Try 'The Simple Life'
By Alyssa Lapid
Get Even More From Bustle — Sign Up For The Newsletter
From hair trends to relationship advice, our daily newsletter has everything you need to sound like a person who’s on TikTok, even if you aren’t.