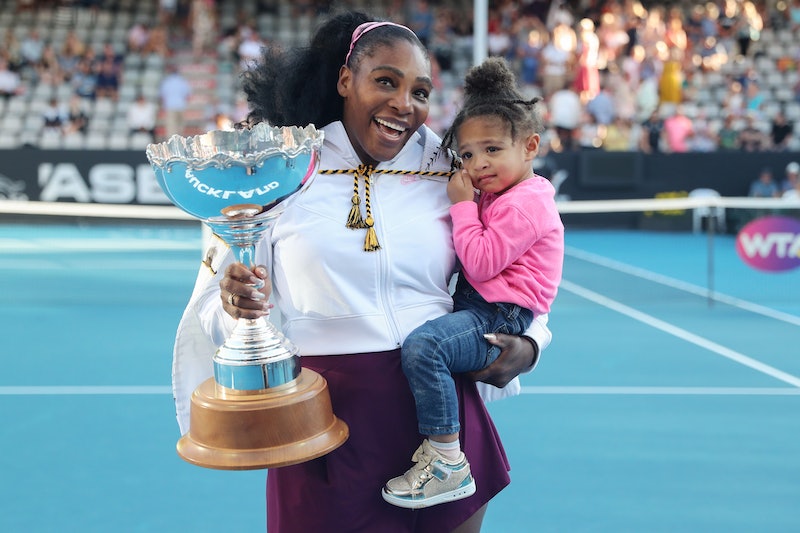 A miniature tennis star is born. On July 2, Serena Williams shared several photos of her daughter Olympia rocking a matching purple tennis outfit alongside her on the court. Unsurprisingly, the two-year-old appears to have the basics of the sport down. Olympia is pictured in an expert crouch position — tennis racket in her little hands — and in formation to hit a tennis ball.

“Caption this (MUST SWIPE RIGHT),” Williams wrote. In the first two images, Williams is pictured in the foreground of the bright blue tennis court while her daughter — who she welcomed in 2017 with husband Alexis Ohanian Sr. — is positioned behind her as her doubles partner. In the last slide, a video, Olympia gives her mom a high five and walks off the court, leaving her miniature tennis racket on the floor.

This isn’t the first time Williams has twinned with her daughter. The athlete shared an Instagram video of the two in Belle’s yellow gown from Beauty and the Beast last month. “Keeping busy,” Williams captioned the clip of the two singing and dancing to the film’s soundtrack while in quarantine.

Williams hasn't competed in a formal match for six months now due to the coronavirus pandemic. However, she announced in June that she'll be returning to the U.S. Open in August. “Ultimately, I really cannot wait to return to New York," Williams said in a video. "I feel like [the U.S. Tennis Association] is gonna do a really good job of ensuring everything is amazing and everything is perfect and everyone is safe." She added, “I’ll certainly miss the fans, don’t get me wrong — just being out there with that New York crowd and hearing everyone cheer — I’ll really miss that in getting me through those tough matches but… I’m excited.”

The U.S. Tennis Association received approval to hold the tournament in New York last month. Pandemic protocols — such as the absence of spectators in the stands, reduced number of ball people, and electronic line-calling — will be implemented to ensure the safety of players and others involved, according to the USTA’s website. In the meantime, Williams has the perfect doubles partner to practice with.