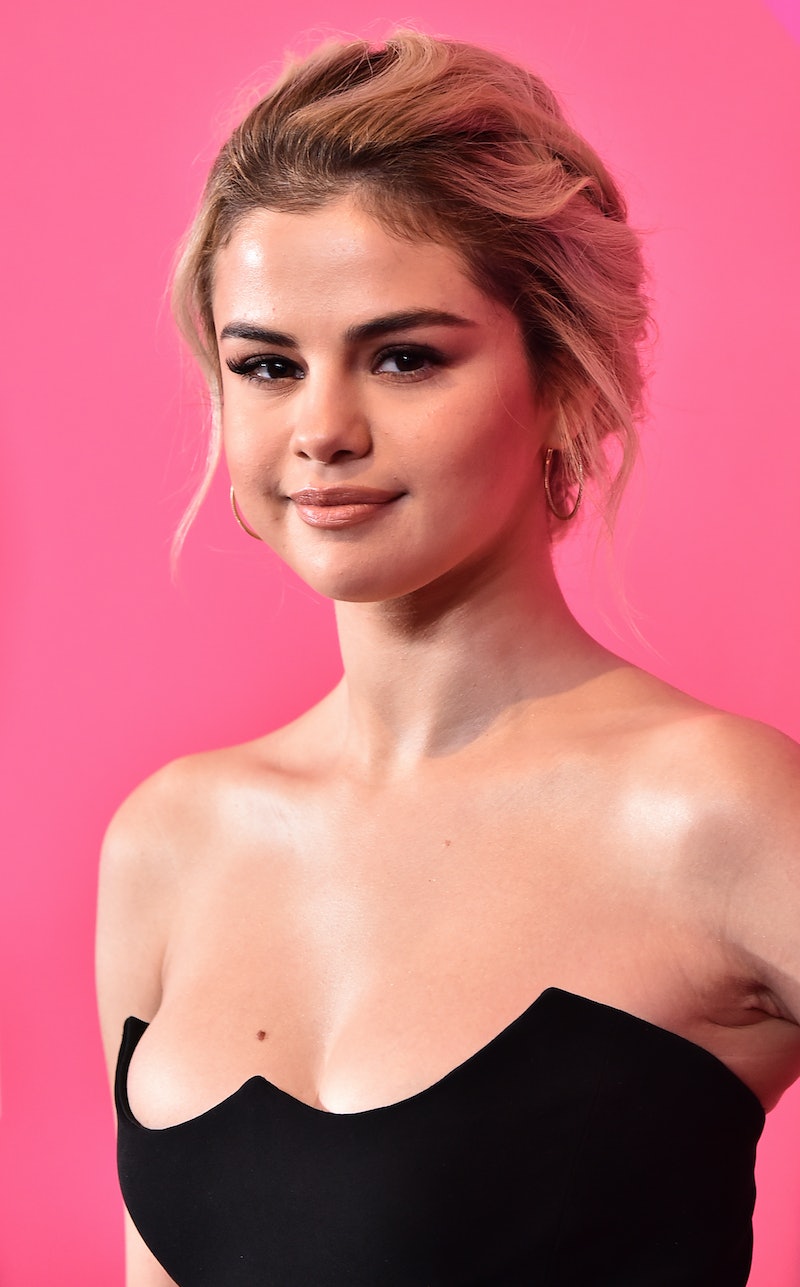 There's something about an impending spring time that tends to inspired dramatic makeovers. Earlier this week, photos of Selena Gomez with a super short haircut started circulating the web — and her fans are all about the new look. While this isn't the first time Gomez has sported a cool-as-heck bob (remember when she faked everyone out by trying on a chin-length wig?) the internet is particularly fascinated with this 'do, since it comes about a week after reports that she and Justin Bieber were officially splitting up. Plenty of people are speculating that this short cut is Gomez's version of the post breakup makeover.

Gomez herself, however, hasn't posted anything about the new look on social media, nevermind confirmed that it was any sort of cathartic chop inspired by the split — so it's equally safe to say that she was just in the mood for a good ol' trim. After all, this wouldn't be her only recent dramatic hair change by any means: At the 2017 AMAs, Gomez showed up with bleach blonde hair that made fans weak in the knees. A few weeks later, she added some rainbow bangs to the look — clip ons, unfortunately. If you go back even further, you can see Gomez has always been a fan of switching up her hairstyle: She rocks long curls, blunt bangs, and even chunky highlights with absolute ease.

This week's bob (which you can see photos of here) is much less festival-chic than those rainbow bangs, but chic nonetheless. As StyleCaster reported, Gomez was first spotted with the 'do walking out of a church service, wearing a taupe fur coat, jeans, and a flowy striped shirt. A day later, she was photographed again, this time wearing a pink bandeau, oversized cardigan, and Roberi & Fraud sunglasses. It certainly seems like this cut is potentially here to stay for a bit.

Unlike her last super-short look, this one appears to be the real deal, even though Gomez hasn't posted a pic to her personal accounts: Refinery29 reported that Gomez visited Nine Zero One salon to get a cut very recently. On Thursday, stylist Marissa Marino posted a photo of Gomez's 'do on her Instagram story, writing "Blunt Bob" and using the scissor emoji. The look is so good, it's enough to inspire whole hoards of fans to go in big for bobs for Spring 2018 — in fact, lots of Marino's most recent photos on her IG feed feature other celebs with a similar, choppy, style.

The last time we saw Gomez with a totally new look was back in February of this year. She showed up at Coach 1941's Fall 2018 show with waist long, brown hair and bangs — equally as gorgeous, of course. Those (presumed) extensions stuck around for less than a month; a few weeks later she was photographed leaving a workout class, hair back to slightly longer than shoulder length.

Still, it's been a minute since we've seen Gomez with anything close to to chin length. Although some people are pining for those long haired days, most of the singer's fans are taking to Twitter to express their love for this super short 'do.

The lob (and shorter) length certainly suits her — whether she's blonde, brunette, or rainbow haired.

And one fan, it appears, may have predicted the cut.

The motivation for Gomez's chop doesn't matter: She's served us with some seriously good spring hair inspiration to bring to the salon this season. And if this style doesn't exactly suit your fancy, there's no doubt she'll show up with another, equally excellent look soon.