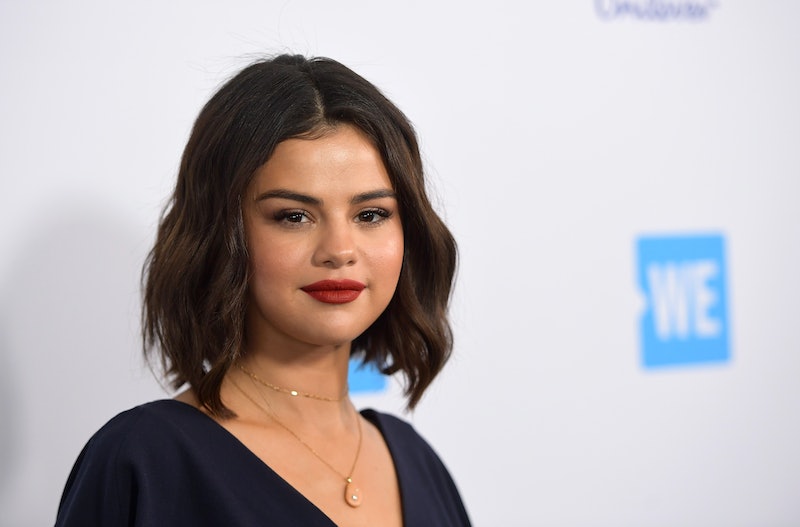 This past year has been kind of rough for one famous pop star. There's been a good deal of speculation surrounding her relative absence from the public eye and she's been pretty tight-lipped herself. However, during a recent interview with Coach's new Dream It Real podcast, as reported by E! News, Selena Gomez opened up about getting treatment for her mental health.

Look, it's not like Gomez owes anybody any sort of explanation about what she's been going through. Dealing with your health — regardless of whether it's physical or mental — can be an intensely private process for a lot of people. Famous or not, Gomez deserves a lot of respect for sharing her feels with fans.

"Last year, I took a lot of time off," Gomez admitted on the Dream It Real podcast. "I think that I needed a moment to myself because I do feel like I was growing and changing."

The singer then went on to reveal what she's learned from her hiatus, and what she wishes she could impart upon her younger self. Gomez explained,

"Gosh, if I knew what I know now. No, you know, I think it's ... I am a believer of therapy. So, I think that I have had opportunities where I kinda reflect on the younger me, and I think that a lot of the times I wished that I could hug my younger self. I wish I could have done and experienced a lot of things, maybe, a little differently. But, I ... I go to therapy."

In October 2018, TMZ reported that Gomez had recently been admitted to the hospital twice over the course of two weeks. The outlet claimed that her first visit was due to a dangerously low white blood cell count, which was likely a result of the kidney transplant she underwent in order to treat her Lupus.

She was later released and then re-admitted shortly thereafter for the same reason, as per TMZ, and ultimately suffered an "emotional breakdown," sources for the outlet reported. (Bustle reached out to Gomez's rep for comment at the time of the report, but did not hear back.)

A source for People claimed that Gomez's second hospital visit was "the tipping point" for the star, and led her to take time off for some much-deserved self-care. "She realized she needed to seek additional help for her ongoing emotional issues," the insider said. "She’s surrounded by close family and has a lot of support. She’s doing better now and is seeking treatment on the East Coast."

Gomez has been slowly working her way back into the public eye over the course of the last several months, but that definitely doesn't mean she's done dealing with her insecurities. "I think that a lot of people don't understand my heart, you know?" Gomez revealed on the Dream It Real podcast. "And I also don't like that, it can be sometimes about appearance too. I don't really appreciate people judging me on my looks, or anything like that."

Ultimately, Gomez said that she'd just "love someone to love me for the person that I am," and not solely based on her appearance. While it's typically pretty tough to imagine being in any celebrity's shoes, wanting to be loved for who you are is definitely something everyone can relate to.