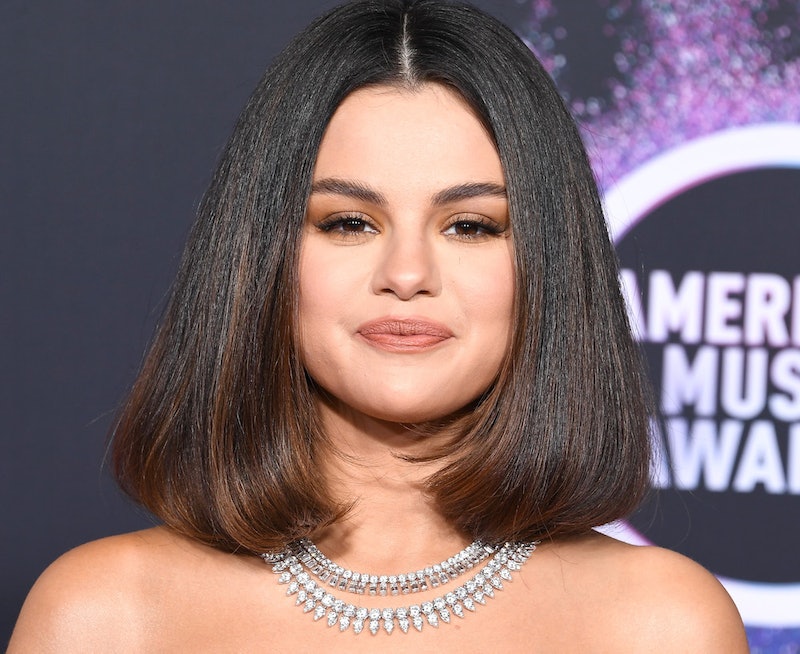 Well, look at her now. Selena Gomez talked about what celeb dating is actually like in a recent interview with Zane Lowe’s New Music Daily on Apple Music's Beats 1. The “Look at Her Now” singer sat down with Lowe ahead of the debut of her new album, Rare, available now, and touched on all things relationships in the public eye. When Lowe noted that fame must “distort” the concept of what a normal relationship is for individuals in the public arena, Gomez mused about how love in Hollywood can become a charade.

"Well, if I can be honest, it is so cliche. It's just, everyone dates everyone so it always seems to be within a little bubble,” Gomez said. “And it's because it's safe, right? You're wanting someone to understand what you're going through. You're almost wanting a counterpart of creativity as well, and it's interesting and fun.” She continued,

"But the problem with that is you end up — whether you admit it or not — having a relationship for people, and not even for yourself. There's almost this point where it's like, 'Oh, we're making it known that we're together.’ Whatever it is, you just need to decide within our world if it's for you, or is it for show?”

Gomez is no stranger to the world of relationships that live in the public eye. She had an on-again, off-again relationship with Justin Bieber for several years before the two parted ways for the last time in May 2018. Bieber then rekindled his relationship with Hailey Baldwin and the two tied the knot in September 2018. Prior to her final reunion with Bieber, Gomez also famously dated The Weeknd, but the two ultimately split 10 months into their relationship in October 2017.

Gomez debuted Rare, her first studio album in five years, on Friday. With her singles “Lose You to Love Me” and “Look at Her Now,” as well as the album’s title track “Rare,” fans are convinced that much of the album’s new songs allude to Gomez’s relationship with Bieber. With “Rare,” the singer references under-appreciation and croons, “Baby right now it feels like, it feels like you don't care, why don't you recognize I'm so rare? Always there, you don't do the same for me.”

At an iHeartRadio listening party for fans on Thursday, Gomez touched on what inspired Rare’s songs. "I have gone through some stuff, and I had moments of being super inspired," Gomez said, as per Entertainment Tonight. "Throughout the years I would have this patch of time when I would just feel like I needed to say all the nasty, sad things I needed to get out and then I wouldn't do anymore than that... I'm really glad I didn't rush this process.”

Rare is available to stream and purchase now.

More like this
Selena Gomez Confirms She's Single Amid Drew Taggart Dating Rumors
By Martha Sorren, Jake Viswanath and Jack Irvin
4 Surprising Celeb Throuples That Got The Internet Talking
By Sophie McEvoy
Linda Ronstadt’s “Long Long Time” Plays A Pivotal Role In The Last Of Us
By Brad Witter
Shakira’s Record-Breaking New Song Takes Direct Aim At Her Ex Gerard Piqué
By El Hunt
Get Even More From Bustle — Sign Up For The Newsletter
From hair trends to relationship advice, our daily newsletter has everything you need to sound like a person who’s on TikTok, even if you aren’t.