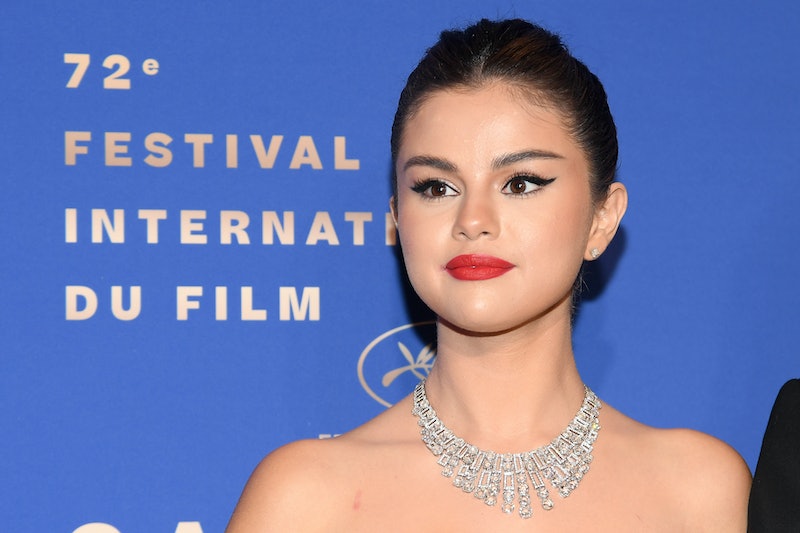 On the June 12 episode of LIVE With Kelly and Ryan, 26-year-old singer Selena Gomez opened up about the impact that frequent social media use had on her mental health, E! reported. Gomez said that she thinks it’s unhealthy for her and other young adults to be “fixating on all these comments and letting this stuff in.” Gomez continued on to say that social media would “make me depressed. It would make me feel not good about myself and look at my body differently and all kinds of stuff."

Because of this, Gomez said she doesn’t keep the Instagram app on her own phone, but will use someone else’s when she wants to post a picture or browse. Gomez also took a social media break in late 2018. During this same time, Gomez also decided to enter a treatment facility as a way to manage her anxiety and depression.

Mental illness is so stigmatized in our society, so it’s refreshing to hear celebrities speak candidly about their experiences with these issues. It’s even more impactful because unfortunately, many people aspire to be and look like celebrities. This is often an unattainable goal, thanks to the unrealistic body standards that are pushed onto celebrities, especially female-identified ones.

Gomez’ decision to uninstall the Instagram app from her phone is linked to positive mental health outcomes. A 2018 study conducted by researchers at the University of Pennsylvania found that limiting social media use to just 30 minutes a day decreased depression and loneliness. The participants that experienced the most improvement were also the ones that entered the study with the highest levels of depression. The takeaway? Less time on social media can be good, especially if you’re experiencing a lot of depression already.

The amount of platforms you use also has an effect on your well-being. An article published in Computers in Human Behavior, showed that young adults who use seven to 11 social media platforms had a risk of depression and anxiety that was more than three times higher than young adults who don’t use more than two platforms. These results were the same, even when the latter group spent more time on social media overall.

That’s concerning news, especially considering that so many people have multiple social media accounts. You're probably familiar with the feeling of swiping between Facebook, Instagram, Tumblr, Tinder, and back again until your thumbs and index fingers ache. (I know I am.) But clearly, keeping up with all those platforms takes a toll. The lead author of the study, Dr. Brian A. Primack, told the Brain Institute at the University of Pittsburgh that the cause of this isn’t clear.

“It may be that people who suffer from symptoms of depression or anxiety, or both, tend to subsequently use a broader range of social media outlets. For example, they may be searching out multiple avenues for a setting that feels comfortable and accepting,” Primack said. “However, it could also be that trying to maintain a presence on multiple platforms may actually lead to depression and anxiety.”

For others — especially outspoken activists, politicians, people of color, and women — social media can be a dangerous space. Trolls often harass people on platforms like Twitter and Facebook. Content moderators are supposed to ban these accounts and remove graphic content, but they sometimes leave dangerous material up and ban the people speaking up about these dangerous behaviors instead. At the same time, constant exposure to graphic material and hate speech combined with low compensation is hurting these moderators as well.

Still, social media has many positive elements. People find community and emotional support. Social media helps increase the diversity of voices that you hear from. And social media is a crucial element of important political movements like Black Lives Matter, which uses Facebook and Twitter to signal boost its campaigns.

But as Selena Gomez's comments illustrate, social media can also be detrimental to well-being. It’s important to stay mindful when using these platforms. You can pay attention to time spent on social media to by using programs like Screentime on iPhone, which breaks down which apps are taking up most of your scrolling time.

Also, it’s good to check in with yourself frequently. If negative feelings or painful anxiety symptoms arise while scrolling through your feed, take the time to interrogate those emotions and figure out a plan for self-care. It’s important to engage with our friends, family, and the rest of the world. But the most important thing is staying safe and healthy.

More like this
Ryan Reynolds Shared His Colonoscopy On The Internet After Losing A Bet
By Jake Viswanath
This Psychological Effect Might Be Keeping You From Hitting Your Goals
By Lexi Inks
Why Harry Styles & Olivia Wilde Make A Great Couple, According To Astrology
By Nina Kahn
Jack Grealish’s Reaction To England’s New Kit Is The Most British Thing You’ll See Today
By Darshita Goyal
Get Even More From Bustle — Sign Up For The Newsletter