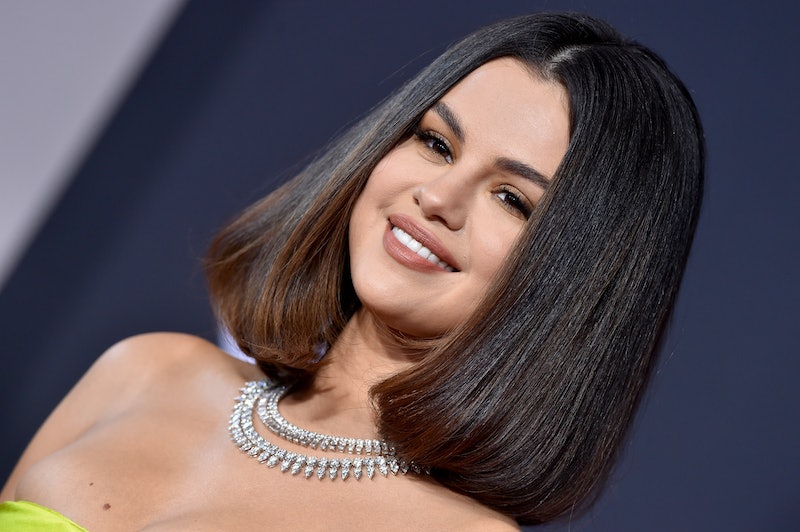 In case you missed it, Selena Gomez made her solo return to the stage at the 2019 American Music Awards. The singer and actor performed her hits "Lose You To Love Me" and "Look At Her Now" for the first time on the stage, but it wasn't the only debut at the show. Selena Gomez's thigh tattoo also made its first appearance, and her new ink is massive.

In an Instagram image posted to her account, Gomez revealed that she got a thigh tattoo just prior to the American Music Awards. The post is a compilation of physical polaroids Gomez grouped together. In one of the polaroids, the "Look At Her Now" singer is seen lifting what appears to be a white dress up to the top of her leg to reveal a large set of praying hands with a rosary wrapped around the wrist. The beads of the rosary are left to dangle and continue the tattoo down the rest of Gomez's leg.

Tattoo artist Bang Bang was tagged in the photo which means this isn't just a temporary bit of ink but the real thing. On his own Instagram feed, Bang Bang uploaded more images of Gomez getting the new tattoo and revealed that he went to her home in order for the singer to get the new piece.

Gomez's thigh tattoo isn't the first ink she's gotten this November, even if it is her largest. Earlier this month, Gomez and friend and collaborator Julia Michaels got matching tattoos before Michaels' show in London. Like her new leg ink, Gomez debuted the friendship tattoo on her Instagram account.

She and Michaels had matching arrows tattooed on their hands just below their thumbs. The arrows differ only in their direction so that the pieces can point toward one another when the pair holds hands.

While Gomez's praying hands and arrow are her latest tattoos, the star has more than just two of them. Like many other celebrities, they're simply small or in an area that is easily concealed. While she was working on the first season of Netflix's 13 Reasons Why back in 2017, Gomez and members of the cast got matching semi colon tattoos in honor of mental health awareness. The tiny bit of ink is hard to see but just on the outside of her wrist.

Gomez also has larger pieces of ink, though. The singer has the phrase "Love Yourself First" written in Arabic on her back. The piece is just slightly offset from her ribcage nearly moving onto the side of her body. While the tattoo may be larger, like her new thigh art, it's relatively easy to hide if chooses to do so.

With Gomez getting two new tattoos in under a month, more could certainly be coming, especially if they're celebratory. The singer scored her first number one hit on the Billboard Top 100 with "Lose You To Love Me," and her new album is launching in early January 2020. Clearly, there's a lot Gomez could commemorate with new tattoos.