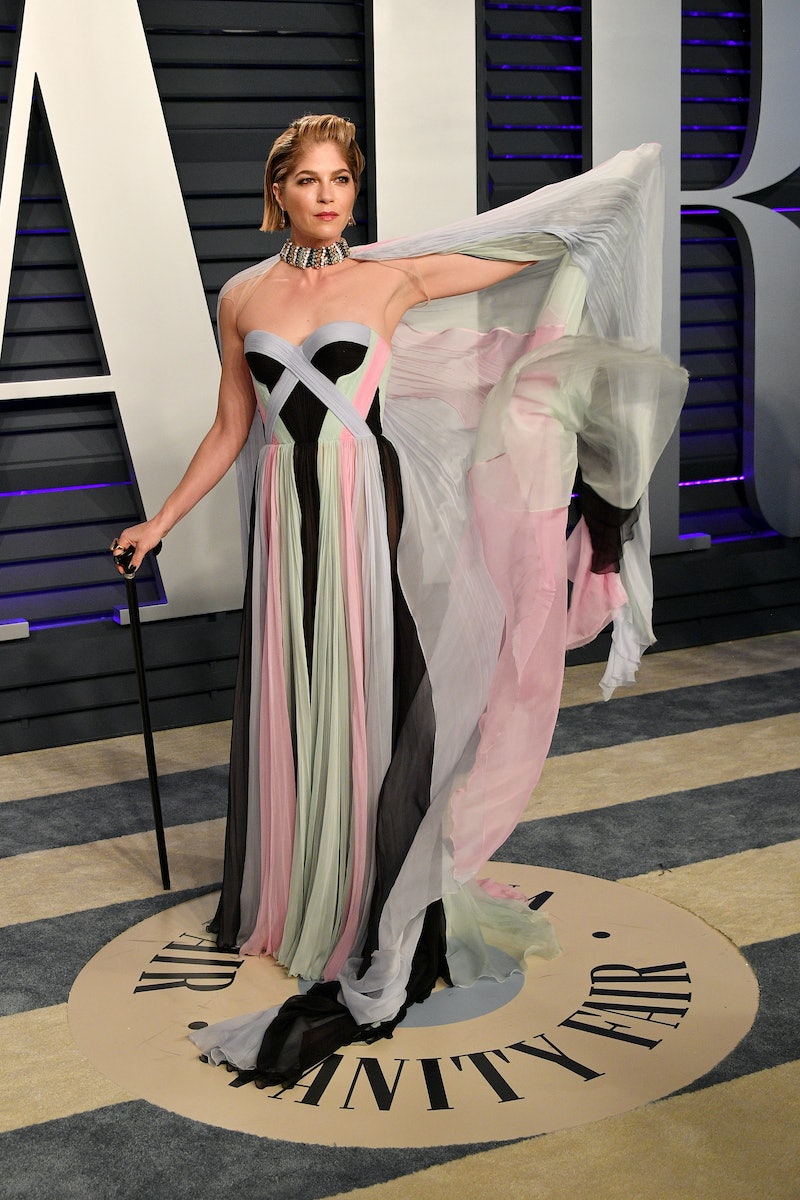 You cannot help but love Selma Blair. The actor, who shared that she has multiple sclerosis in October 2018, has become an advocate for those who've also been diagnosed with the condition, sharing difficult and lighthearted moments of her experience with the world. Selma Blair released a tutorial for doing makeup while living with MS on her personal Instagram, and it was so comically real. She shared her not-so-serious hack for applying bronzer while adjusting to the change in her fine motor skills.

According to the National MS Society, multiple sclerosis, also commonly referred to as MS, is "an unpredictable, often disabling disease of the central nervous system that disrupts the flow of information within the brain, and between the brain and body." That neurological interference can lead to the degradation of fine motor skills. But that hasn't stopped Blair from getting creative and being resourceful with makeup.

In the video, with her angled blonde bob swept off her face in a deep side part, Blair grabs a fluffy black face brush. She then offers a super short yet hilarious tip for rocking a bronzy glow — and that's to just go for it with the biggest tool imaginable. She sweeps the brush all over her face in circles and giggles, saying, "MS People. Brush. Big. Bronzer. There. Done. Stop. Bye."

It was an incredibly candid moment showing how Blair does basic things while living with MS, all the while embracing her sense of humor. She injected a little levity into the adjustments to her daily routine, which is something many who also have her condition deal with. In the caption of the Instagram post, she summed up her attitude and her actions, writing, "But here is my solution to applying makeup with a lack of fine motor skills. #laugh and feel free to reapply my makeup. #makeuptutorial #real."

PEOPLE also reports that Blair had previously uploaded a longer clip detailing this situation on her Instagram story, saying, "OK, so my fine motor skills aren't, like, fine at this moment, so I just want to say I'm gonna probably give a makeup tutorial… never. But if I do, then you know I'm really just trying to have fun."

Blair also explained that her friends are often helping her fix her makeup, saying, "'Cause I noticed I put my makeup on in the morning and all day people are rubbing my face — friends — and I'm saying, 'Whatcha doing?' and they're like, 'Just a little makeup!' And then my manager just said maybe I better not do this." She then posted the funny video above to her feed.

Followers were totally moved by Blair's videos, especially those that also have or have been affected by multiple sclerosis. One user praised her for sharing, writing, "My grandmother had MS. You're bringing back all the wonderful memories I shared with her. Some days I can't remember much about her but watching you brings me right back to her. Thank you."

A user who has MS shared Blair's sentiments, stating, "Amen! Been there, done that! Mascara though...no way! All natural when the fine motor is acting up. You are my new favorite fellow MS warrior! Love your confidence, humor and smile!"

Another user felt that they found a kindred spirit, saying, "I adore you so much. I'm losing my fine moterskills and having trouble with makeup. This made my damn day."

Another said she tried Blair's tip and it worked, posting, "Did the bronzer and big brush trick today and everyone said how good I looked."

Blair previously spoke to Vanity Fair about her desire to work on an adaptive clothing line, saying people with MS and other conditions "shouldn't have to sacrifice style." She is actively sharing her own story and using her platform and fame to assist other fashion and beauty lovers, and that's precisely why fans love her so much.