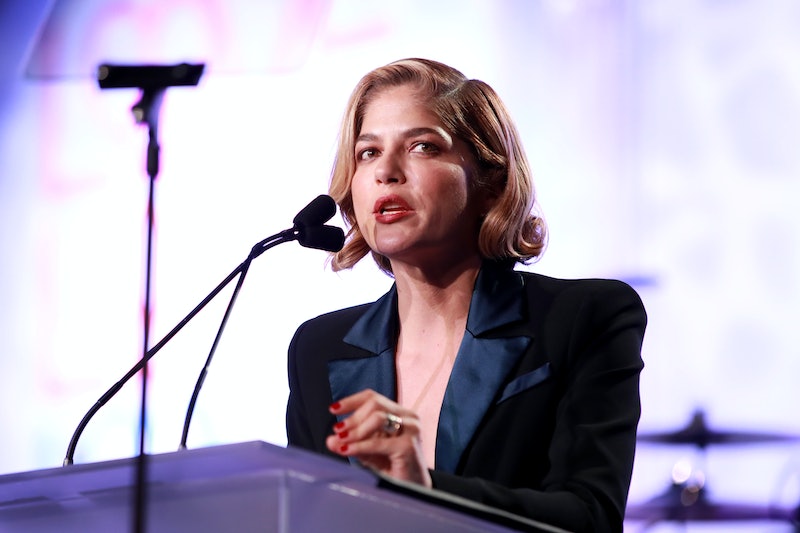 For many people living with chronic illness, managing their illness can come in many forms. Actor Selma Blair, who lives with Multiple Sclerosis (MS), wrote on Instagram that while she isn't currently feeling well, she's thinking fondly of time she spent horseback riding, which she says helped her "grow with self love." Blair's comments on horseback riding, as PEOPLE reported, highlights how animals can provide relief to people living with chronic illnesses.

The actor, who was diagnosed with multiple sclerosis (a disease of the central nervous system) in 2018, said she found her horse Sky Top when she was struggling after the birth of her son. She noted that it's the thought of riding Sky Top again that's motivating her to push herself.

"We only had a short time before I couldn’t even get to him or stay on. But he has come so far. And even though I may seem like I have gone farther away, I am learning and getting healthier. Even as I get seemingly sicker," Blair said on Instagram. "I will jump this horse around again. Affording horse shows will require some major work opportunities ahead. So I am asking for it all. I am asking. For all of us who want it. Ask. Ask. Listen. I have the unicorn. Now I have to be able to find him again."

While you're likely familiar with service and emotional support animals, you might not know that animals can help people recover from any number of ailments. In fact, animals have proven so beneficial that there's a name for how they help people heal. "Animal-assisted therapy is a growing field that uses dogs or other animals to help people recover from or better cope with health problems," the Mayo Clinic wrote. "Animal-assisted therapy can significantly reduce pain, anxiety, depression and fatigue in people with a range of health problems."

Many hospitals and long-term care facilities have animal-assisted therapy programs. However, you can also get all the good feels from your own four-legged friend. On the animal-assisted therapy page on its website, UCLA noted that animals can lower blood pressure and improve cardiovascular health, reduce the amount of medication a person needs to take, lessen physical pain, increase motivation, and more.

What's more, petting an animal triggers an automatic relaxation response in your body. "Humans interacting with animals have found that petting the animal promoted the release of serotonin, prolactin, and oxytocin ⁠— all hormones that can play a part in elevating mood," UCLA said.

In addition, a study conducted by the Frances Payne Bolton School of Nursing at Case Western Reserve University found that having a pet can help women better cope with a chronic illness because pets offer their humans unconditional support and pleasure.

"She’s going to be right there when I’m hurting," a woman is quoted as saying about her cat. "Dogs know when you’re in a bad mood … she knows that I’m sick, and everywhere I go, she goes. She wants to protect me," another woman said.

Animals also offer companionship, which is important for people living with chronic illnesses because being sick can be isolating. Your companion animal will always listen to your problems. They're not stingy with their affection, and they'll never complain when you want to watch Gilmore Girls for the eleventy-millionth time.