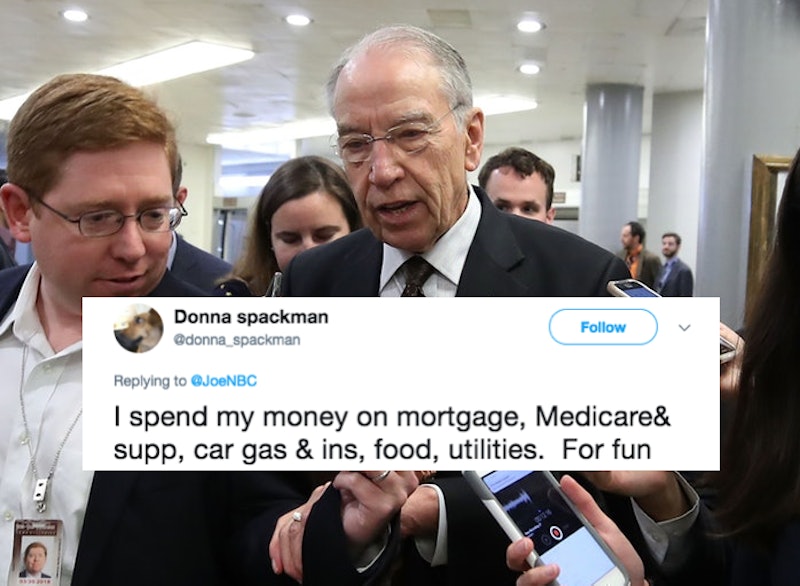 During an interview with the Des Moines Register on Nov. 29, Iowa Senator Chuck Grassley tried to justify cutting the estate tax by suggesting that doing so rewards investing — and disincentives those who are "just spending every darn penny they have, whether it’s on booze or women or movies.” Grassley's comments have certainly struck a nerve on social media, with many condemning the senator for seeming to suggest that middle and low income individuals who do not have "estates" are frivolously spending their money.

The estate tax affects people who inherit large sums of money from a person who has died (oftentimes a wealthy family member). So by removing the estate tax, the children of the rich — like Ivanka Trump and her siblings — will gain massive, tax-free payouts while the government will lose billions. The estate tax only applies to estates worth over $5.49 million for individuals, and $10.98 million for married couples. Cutting it completely would cost the federal government $269 billion over the next 10 years, according to the Joint Committee on Taxation. According to CNN Money, only 0.2% of all estates are subject to the tax and the money generated from it makes up less than one percent of federal revenue. Basically, by cutting the estate tax, the super rich will be allowed to hold onto old money for generations.

Still, Grassley, as well as many members of the GOP, have long condemned the estate tax for "doubly" taxing an individual — first through their income, then upon their death. Grassley offered his own further critique of the tax with his out-of-the-blue comments to the Register last week, saying (in full) that he believed repealing it was a good thing because, “I think not having the estate tax recognizes the people that are investing — as opposed to those that are just spending every darn penny they have, whether it’s on booze or women or movies." Besides being offensive, there's something factually incorrect about that remark: inheriting millions of dollars doesn't equate to "investing." For the everyday person who is trying to put away money, estate tax breaks will yield zero reward. Instead, those breaks will take away money that could be put towards other government programs.

Joe Scarborough, host of the MSNBC show, Morning Joe, shared Grassley's comments on Twitter on Sunday — and many people were infuriated by the senator's remarks. Some were outraged that Grassley seemed to suggest that people who were not wealthy enough to have estates recklessly spent their money. Indeed, many Twitter users countered his remarks by noting that that they spend their income taking care of expenses — not on supposed frivolous luxuries — and that it was outrageous to suggest otherwise.

One woman aptly captured this particular sentiment, saying, "Oh right because THATS why people can’t invest their money - it couldn’t be because of rent/ mortgages or childcare or tuition or food or healthcare...Their disdain for the middle class is beyond obvious."

Other users echoed similar thoughts and condemned Grassley for being "disconnected from reality" and for unfairly characterizing those in lower and middle income brackets. As another user put it:

... Dear Mr Grassely. You have the idea that people who aren't ultra-rich are decadent alcoholics. The fact is correct they may well spend every penny they have on housing, food, insurance, heat and still come up short. And your craven bill means maybe they can't afford essentials.

Twitter also noted the supposed sexist nature of these remarks, with one user commenting, "So he lumps all women together as a vice on par with booze?" and another replying, "Yes. apparently, we’re all commodities."

Grassley has since defended his comments by saying they were "taken out of context," according to the AP, and said it was a question of “basic fairness, and working to create a tax code that doesn’t penalize frugality, saving and investment.”

In the end, Grassley and his Republican colleagues in the Senate voted to pass a highly controversial tax bill that would, among other things, double the exemptions for the estate tax. This means that, if the Senate version of the bill becomes law, only individuals with estates worth over $10.98 million would be subject to the estate tax.

The House version of the tax bill, which was passed in mid-November, actually goes even further and eliminates the estate tax completely. The bills will have to be reconciled before they can be sent to President Trump for his signature, so the its final implications for the estate tax remain unknown.

Editor's Note: This post was updated at 2pm on December 4 to include Grassley's response.