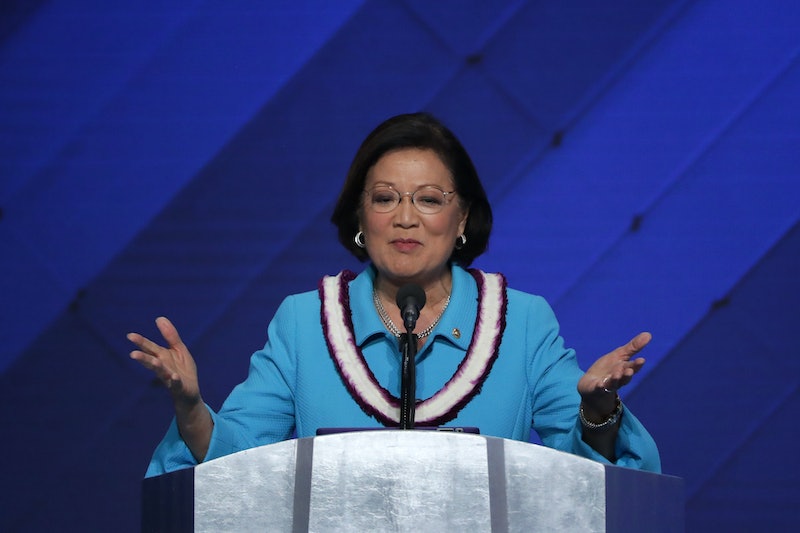 All eyes were on Arizona Sen. John McCain's return to the Senate floor on Tuesday to cast his "aye" vote on the measure to move forward with debates on health care reform and the potential repeal of Obamacare. What everyone might've missed between the vote and the standing ovation for McCain was the story of another politician recovering from a cancer-related surgery — Sen. Mazie Hirono, who voted against the repeal.

The Democratic senator from Hawaii was diagnosed with stage-four kidney cancer in May and, in the months leading to the vote casting this week, underwent two separate surgeries to remove a kidney and a lesion on her rib.

For Sen. Hirono, her very recent health troubles and recovery directly informed her approach to policy heading into these votes, as she told NPR's Morning Edition last week.

I was diagnosed with stage-four kidney cancer only three months or so ago. And that's why it is so true that all of us are just one diagnosis away from a major illness. And I'm glad that we caught my cancer early enough before it went to other parts of my body and that I could concentrate, because I had insurance, on appropriate care as opposed to worrying about how the heck I'm going to pay for the care that I needed to save my life.

The 69-year-old junior senator from Hawaii has been a vocal critic of the Republican plans to repeal, replace, or pass a so-called "skinny repeal" of the current health care law.

Addressing the Senate floor on Monday night, Hirono explained how the various unknowns and uncertainties in current health care conversations can harm the vulnerable patients who are already battling for their health. Asserting that "health care is personal," she cautioned against passing measures that would leave those patients in the lurch.

I was able to sit down with my doctors and decide how I would fight my cancer, not how I would pay for treatment. No one should have to worry about whether they can afford the healthcare that one day might save their life. Healthcare is personal, and it is a right, not a privilege reserved only for those who can afford it.

Hirono's personal stake in the health care debate serves as a foil for many Americans who were disappointed in McCain's decision.

In a statement following the vote, Hirono once again expressed concern over various proposals from Republicans that, according to Congressional Budget Office estimates, could leave millions more people uninsured:

Today's vote was disappointing, but our fight to save the Affordable Care Act is only beginning. Any proposal Senate Republicans come up with will kick millions off of their health care and hurt the sickest, oldest and poorest in our communities. If this is what the Republican Party wants to stand for, the American people will hold them accountable.

For all the disappointment in (and roasting of) Sen. McCain, Sen. Hirono's experiences as a cancer survivor thoroughly committed to preventing millions of people from becoming uninsured offers a powerful counter-narrative.