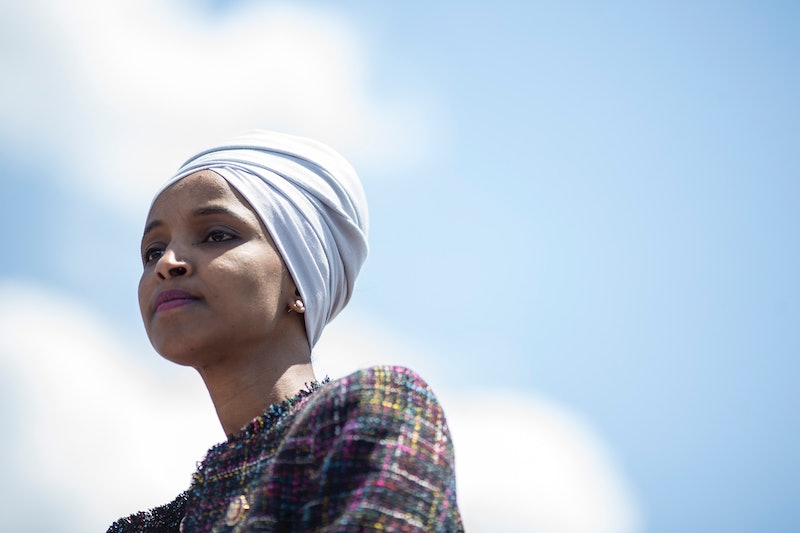 In this op-ed, lawyer and organizer Aditi Juneja examines how "send her back" chants like those directed at Rep. Ilhan Omar are part of the fabric of the United States and what the country can do to change that.

Days after the president tweeted that four congresswomen — including Rep. Ilhan Omar — should “go back” to their countries, supporters at a Wednesday rally in Greenville, North Carolina, broke into chants of “send her back.” While President Donald Trump has since claimed he disagrees with the sentiment and “was not happy with it,” that claim is far from persuasive. Trump’s entire 2016 campaign, his policy agenda, and his use of his platform has had one central theme: white supremacy. He has inflamed racism among voters, and that is the reason he won the presidency. It is clear that for the 2020 election, he plans on deploying a similar strategy.

But shortly after a video of the chant came out, many people — including me — began tweeting that we are #HeretoStay and #IStandWithIlhan. For me, the attacks on her are personal. They are meant to communicate that Omar and myself are not “real” Americans because we are non-white immigrants. As New York Times reporter Astead Herndon explained on Twitter, a contest often breaks out among the crowd at Trump rallies “to yell the most eye popping thing as the president speaks on a given subject.” They are competing to see who can best communicate that in order to be a “real” American you need to look a certain way. This competition is rooted in white supremacy and meant to evoke fear.

It’s the same fear that I felt the night that Trump was elected president. I was with my parents in Pennsylvania, having spent the day at a polling location to make sure no voter was turned away at the polls and that all were able to exercise their right to vote. I went to sleep in utter shock. I remember looking around the train back to New York the next morning and feeling scared. I knew that approximately 50% of voters in the county my parents lived in voted for Trump. As I looked around the train, I wondered, “Did these people want to ban me? Did they think my family was filled with rapists and criminals?” I felt deep pain realizing that, even if some of the people on the train didn’t think those horrible things, they had no problem supporting someone who did. I began to wonder whether this country that I’ve called home since I was 9 months old valued me or my safety.

There is only one way we can save ourselves, and that is the way we always have — together.

A couple of months later, in January 2017, when Trump signed the Muslim ban, I watched as a flood of people rushed to airports all over the country. My law school colleagues and friends went to show their solidarity and to make their dissent known, as did people of all races and religions. I spent that night on my couch collecting names and phone numbers of lawyers at airports from Twitter and putting them in one central place to make it easier for people to find. As I did this work, I cried. I was so moved, thinking that this time would be different. That people in the United States would speak up for others, even when they weren’t personally affected, bringing to mind Martin Niemöller’s famous quote. That this time when the government came for some of us, the rest of us would say something.

But the one thing that has been made clear to me over the past two years is that no one is coming to save us. Elections matter and they have consequences, but it is too much to ask any given candidate to save us. Politicians bring about change when organizers bring that change to their doorsteps. We have to save ourselves.

Whether or not we agree with Omar’s policy preferences, I believe that most people in the United States agree that she has a right to be in this country and represent her district in Congress without chants threatening her deportation. I am hopeful because it is easier for me to live with hope than despair. I am hopeful because hope is what gives us the courage to fight for the world we want. As activist Mariame Kaba says, “Hope is a discipline.”

Over the past year, I have heard many people say that “this is not who we are” or “this is not normal.” These statements erase the long history of white supremacy in our culture, our policy, and our politics. However, who we are changes, and we have the power to redefine “normal.” If we don’t want to be a country where our leaders espouse racism without consequence, if this is not a “normal” that we find tenable, the question we must all ask ourselves is, “What am I doing to change who we are or what is considered normal?”