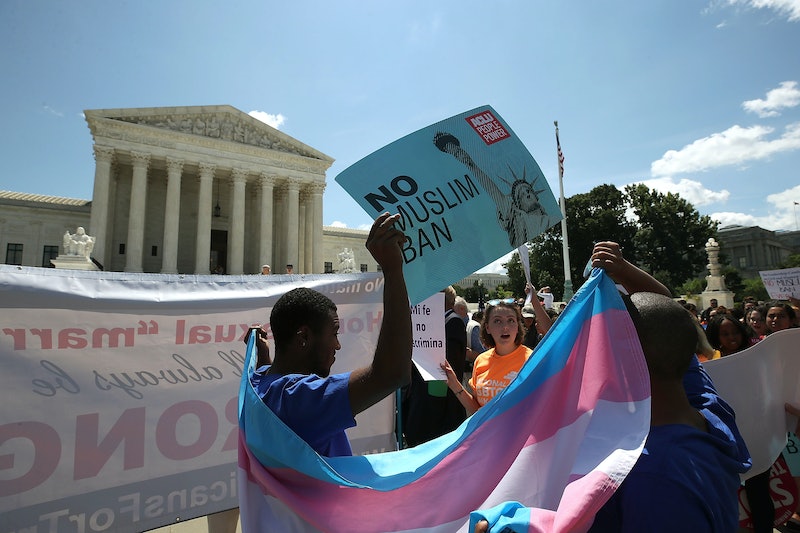 When Trump’s travel ban was first announced in January 2017, masses of people mobilized to protest at New York's John F. Kennedy Airport, where newly-"banned" travelers were arriving, and in cities across the country. But now, as the travel ban has been affirmed by the Supreme Court, a slew of other decisions were made this week that set back civil rights for many different groups. Then, only one day after SCOTUS ruled in favor of the travel ban, the court’s swing voter, Justice Anthony Kennedy, announced he would retire in July, all but guaranteeing that the Trump administration would install an extremely conservative justice in his place, and prompting fears that the advancement of many civil rights may be in danger of being overturned. And we can't forget that immigrant families are still separated at the border. The idea of showing up in full force, now, to protest each and every one of these things seems nearly impossible.

Part of me cannot help but to feel shocked and fearful. Shocked about the injustice perpetuated on a daily basis, and fearful of the repercussions. With SCOTUS delivering a slew of frustrating verdicts, to me, as a Muslim-American woman, the response to this news — particularly about the travel ban — has been the most challenging to process.

In Justice Sonia Sotomayor’s dissent, she writes that the court's decision “leaves undisturbed a policy first advertised openly and unequivocally as a ‘total and complete shutdown of Muslims entering the United States’ because the policy now masquerades behind a façade of national-security concerns,” as Chief Justice John Roberts had pointed to in his opinion for the majority. The five to four ruling will devastatingly affect families from, Iran, Libya, Somalia, Syria, Yemen, Venezuela and North Korea. It will affect people of all faiths, but particularly my Muslim community.

This travel ban reinforces the notion that Muslims are foreign — even though many of us, including myself, are born and raised here in the United States. We have to be hypersensitive to how we behave in public, since we're constantly under the magnifying glass. Living in area with predominantly Arab Muslims, I learn from my Yemeni neighbors how they've become separated from their families as a result of the travel ban, and it's uncertain when they will be reunited. While they mourn, they stand strong with faith that and hope that God will reunite them sooner or later. In the interim, they find solace knowing that justice one day will be served.

But it's not like this is new. This ban has been in full effect since December. Lawyers working for clients seeking to come to the U.S. from countries subject to the travel ban report that waivers, which the Trump administration claims all applicants are considered for, are rare and inconsistently given. But I am not going anywhere. We are not going anywhere. We will not be banned. The United States is just as much as my home as it may be yours. As a Muslim, I stand for religious freedom for all, as my religion teaches me that there is no compulsion in religion. All people should be afforded the freedom of religion. Everyone means everyone. No exceptions.

Decisions like these make Muslims like me wonder if we’re really “free” in this country. But amidst the chaos, there is still hope. While this decision is significant, there will be other, future cases where justice will prevail. This same week, after massive public outcry, a federal judged ordered the Trump administration to reunite migrant children with their families after the administration separated them at the border. We cannot give up now. We need to continue to speak out in the face of injustice, despite all odds. Because it works.

So please don’t lose sight of your activism, even though it seems like there are almost too many things we need to fight for. History has shown that progress and change come from the people — from moments like the airport protests when the original ban was first announced, and from organizers and campaigns that guide us on the path toward justice. Today and every day moving forward, I urge you to join me in committing to fighting this travel ban.