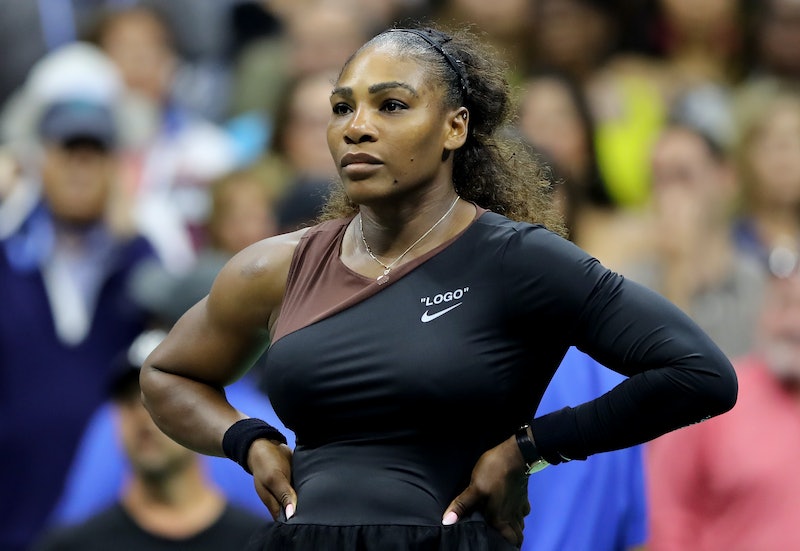 The 2018 U.S. Open Women's Final didn't happen without some unfortunate moments. Serena Williams discussed the U.S. Open controversy in a personal essay she wrote for Harper's Bazaar that was published on Tuesday with completely unretouched photos. Not only did she open up about why the events were so emotional for her, but the tennis star also explained how she bounced back after everything.

For those who need a refresher, Williams lost the Open finals to Naomi Osaka. It was Osaka's first Grand Slam title win. During their game, Williams exchanged some heated words with chair umpire Carlos Ramos after he cited for her multiple code violations, including alleging Williams' coach sent her signals from the stands. She also broke her tennis racket after slamming it onto the court, called Ramos a "thief," and accused him of being sexist. During the game, Slate reported Williams said to Ramos, "I don’t cheat. You owe me an apology. You owe me an apology. I have never cheated in my life. I have a daughter and I stand [for] what’s right for her, and I’ve never cheated, and you owe me an apology."

Regarding the controversy, Ramos spoke with Tribuna Expresso (via The Telegraph) and said, "I'm fine, given the circumstances. It's a delicate situation, but 'à la carte' arbitration does not exist. Do not worry about me!" (Bustle previously reached out for comment from Ramos, and an International Tennis Federation spokesperson wrote in an email statement that chair umpires "don’t comment on their matches.")

In her essay, Williams further explained the devastating moment by writing,

"In the end, my opponent simply played better than me that day and ended up winning her first Grand Slam title. I could not have been happier for her. As for me, I felt defeated and disrespected by a sport that I love — one that I had dedicated my life to and that my family truly changed, not because we were welcomed, but because we wouldn’t stop winning."

Days following the ordeal were extremely emotional for Williams. She said she constantly questioned herself and whether or not she made the right choice in speaking up against Ramos. She even started going to therapy and couldn't hold a tennis racket. As she wrote, "I started to think again, 'What could I have done better? Was I wrong to stand up? Why is it that when women get passionate, they’re labeled emotional, crazy, and irrational, but when men do they’re seen as passionate and strong?'"

Eventually, the athlete realized in order to move on she had to apologize to Osaka. Williams also made it clear that, yes, it was definitely upsetting that a game was "taken" from her, but that's not why she understandably felt a multitude of emotions. For her, the 37-year-old athlete felt awful for how the situation affected Osaka — and during a major moment of her career. After processing her feelings Williams reached out to Osaka. Part of her message read,

"As I said on the court, I am so proud of you and I am truly sorry. I thought I was doing the right thing in sticking up for myself. But I had no idea the media would pit us against each other. I would love the chance to live that moment over again. I am, was, and will always be happy for you and supportive of you. I would never, ever want the light to shine away from another female, specifically another black female athlete. I can’t wait for your future, and believe me I will always be watching as a big fan! I wish you only success today and in the future."

Williams said Osaka responded with the following message that made her cry:

"People can misunderstand anger for strength because they can’t differentiate between the two. No one has stood up for themselves the way you have and you need to continue trailblazing."

As soon as she read Osaka's email, Williams said she finally understood why the controversy hit her so hard. She explained,

"It wasn’t because of the backlash I faced but rather because of what had happened to the young woman who deserved so much more in her special moment. I had felt that it was my fault and that I should have kept my mouth closed. But now, seeing her text putting everything in perspective, I realized she was right."

For far too long women have been made to feel as if we shouldn't use our voices. We've also been labeled as "crazy" or "emotional" anytime we express ourselves in a passionate way. Well, Williams isn't OK with that and refuses to let the U.S. Open controversy and the backlash she's faced to stop her from using her powerful voice, especially for the sake of her daughter, Olympia.

Williams wrote about why her voice has yet to be silenced,

"Ultimately, my daughter is the reason I use my voice, the reason I picked up a racket again. Love breathes life and newfound perspective into people. It’s not about quitting when someone presents a challenge; it’s about getting up when you are down, dusting yourself off and asking, 'Is that the best you got?' Because I have God with me, and I can take whatever comes my way."

There's no denying Williams went through quite the emotional ordeal during last year's U.S. Open. As difficult as it was for her, Williams learned a life lesson and showed other women in the process the importance of using our voices to stand up for what we believe in.

More like this
Watch Emma Raducanu’s Incredible Response To Her Early Wimbledon Exit
By El Hunt
Adele’s All-Female Lineup Includes Kacey Musgraves, Mahalia, & Self Esteem
By Shahed Ezaydi
Vecna Officially Has A Fan In 'Stranger Things' Star Jamie Campbell Bower
By Alyssa Lapid
Adele Says Postponing Her Las Vegas Residency Was “Brutal”
By Alyssa Lapid
Get Even More From Bustle — Sign Up For The Newsletter