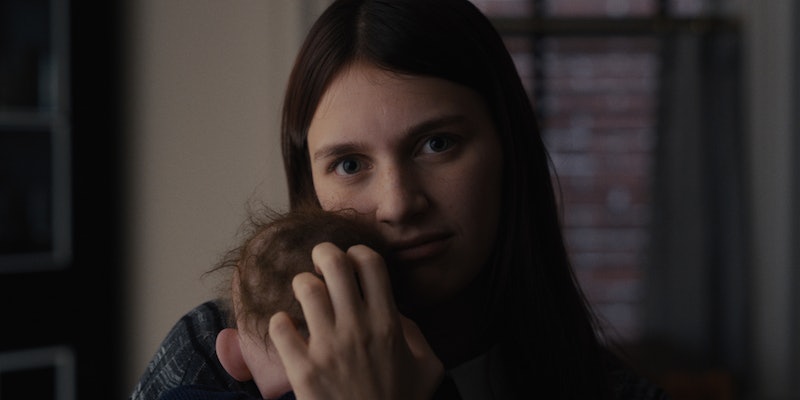 Spoilers ahead for Episode 1 of Servant Season 1. When a movie or TV show has the name M. Night Shyamalan attached to it, you can expect some amount of horror to be involved. His new Apple TV+ series certainly fits within that vein, but Servant isn't outright scary so much as it is psychologically torturous. Most of the time, it's hard to tell what is and isn't real.

The show stars Lauren Ambrose and Toby Kebbell as Dorothy and Sean Turner, a married couple living in Philadelphia who have just hired a nanny to take care of their 13-month-old baby, Jericho. The only problem is that the real Jericho died a few months prior, and Leanne has actually been tasked with caring for the exceedingly creepy, hyper-realistic doll Dorothy believes is her son. As Sean explains, Dorothy was catatonic after Jericho's death, and this was the only thing that snapped her out of it. So, he and her brother Julian (Rupert Grint) have just continued to keep up the farce.

Leanne's presence only intensifies this disconcerting dynamic, as it quickly become clear there's something off about her. She's both suspiciously quiet and alarmingly secretive about her life before arriving at the Turners', as well as a little too eager to play along with the Jericho ruse — even when Dorothy isn't around. When Sean tells Leanne she can stop pretending, she just continues to rock Jericho gently, insisting she hasn't the faintest idea what he's talking about.

Not knowing Leanne's intentions or where she even came from is at the heart of the eerie feeling that hangs over Servant, leaving viewers with an overriding sense of anxiety that's hard to shake while watching.

Of course, as an executive producer and director of several episodes, Shyamalan's influence is also heavily felt throughout the show. Servant is unrelentingly destabilizing, including slow, tension-building camera pans, screeching violins, and ominous religious overtones. Even the way Sean cooks somehow sounds menacing. But the uncertainty of what's happening is easily the scariest part: by the time the first episode ends, Jericho has either come to life or been replaced with a real baby. How or why, we've yet to find out.

More like this
Does Umbrella Academy Season 3 Have A Post-Credits Scene? The Answer Will Surprise Fans
By Brad Witter
James Nesbitt Won’t Join 'Strictly' For A Very Relatable Reason
By Sophie McEvoy
'Stranger Things' Fans Are Begging For Steve To Live For The Funniest Reasons
By Grace Wehniainen
Superman & Lois Season 3 Will Introduce A Complicated New Supervillain
By Brad Witter
Get Even More From Bustle — Sign Up For The Newsletter