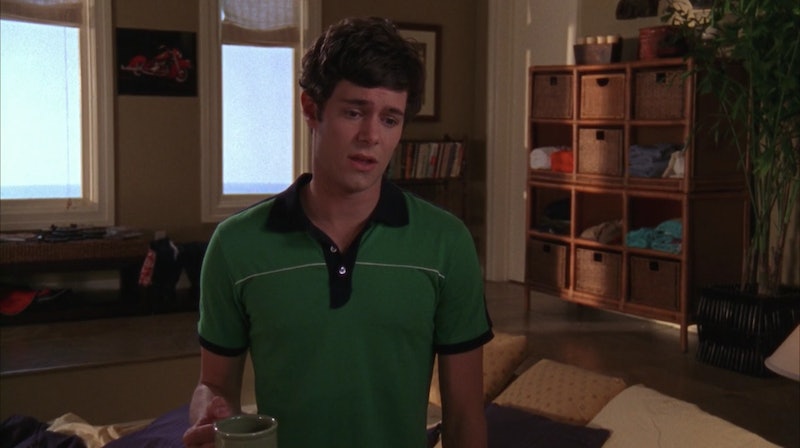 Over the course of four seasons on The O.C. Seth Cohen established himself as a nice guy. The brainy, comic book-obsessed counterpart to adopted brother Ryan Atwood's brawn, Seth seemed quirky and lovable, but what if Seth Cohen was actually the worst?

Sure, Seth, as played by Adam Brody, kept his favorite childhood toy — shoutout to Captain Oats — on his nightstand and opted for listening to This American Life and playing video games over playing water polo with the Orange County's über-masculine jocks. But in truth he was just as sexist and made as many problematic choices as characters like Luke Ward (Chris Carmack), the biggest jock on campus.

Throughout the show — though certainly not all the time — Seth mistreated women, neglected his mom, and let his male narcissism get the better of him. While you could chalk those behaviors up to his relative lack of experience in the romance department or your average adolescent male narcissism, they're also major character flaws that make him less deserving of the lovable reputation that is often ascribed to him in network-teen-drama lore. Here are five moments on The O.C. that Seth Cohen showed he was actually toxic to prove it.

1. When He Tried to Date Both Anna and Summer

In Season 1 of The O.C., Seth didn't have a lot of dating experience when he suddenly found himself interested in two girls who were also interested in him. That could be overwhelming for anybody. However, just because he was overwhelmed didn't give him the right to toy with their emotions. Seth strung both Anna (Samaire Armstrong) and Summer (Rachel Bilson) along for way too long, and didn't exactly exhibit a ton of sensitivity to their feelings. He even got them both the exact same Christmas gift, and helped to pit them against one another.

When he finally did choose Anna, they discovered they weren't a great fit, but as soon as they broke up, he asked Summer for another chance. No matter if his feelings were genuine or not, he acted like a total jerk.

2. When He Sailed Away And Left Summer Nothing But a Note

Speaking of acting like a jerk, when Ryan went back to Chino at the end of Season 1, Seth took off too, sailing up to Portland in secret. That's right, he literally sailed away, leaving his girlfriend with nothing but a note to explain his absence.

When he returned to Newport, Summer had moved on with Zach Stevens (Michael Cassidy), but Seth expected them to pick up where they'd left off. Again, he showed little to no understanding of how Summer felt. There seems to be a pattern here.

3. When He Wouldn't Stop Talking About Himself

Seth talked about himself a lot. Whether talking Anna's ear off about Summer — Anna even called him out on it — or remaining so absorbed in his own problems that he didn't notice his mom's drinking problem, he could be seriously self-involved. And, unfortunately, he didn't really seem to grow out of his narcissism as he got older.

4. When He Burned Down the Newport Group

Remember that time Seth accidentally burned down the business his grandfather built and where his mother and father had both worked because he lit a joint that he got from Marissa's little sister and forgot to put it out? Sure, this Season 3 event was an accident, but that's one heck of a mistake for a senior in high school to make.

5. When He Hurt Summer Because His Ego Was Bruised

In Season 3, Seth is not only condescending to Summer about her SAT scores, but when she gets into Brown University and he doesn't, he lies and says he did. However, he doesn't bother to show up for the interview with a scout from the school, and ends up pushing her away. Not getting into the school of your dreams is hard, but Seth barely even tried to be happy for the woman he loves. Instead, his disappointment ended up raining on her parade.

Seth definitely wasn't all bad, and his flaws were mostly balanced by plenty of good qualities, like anybody's. But for a few storylines there, albeit temporarily, he was kind of the worst.