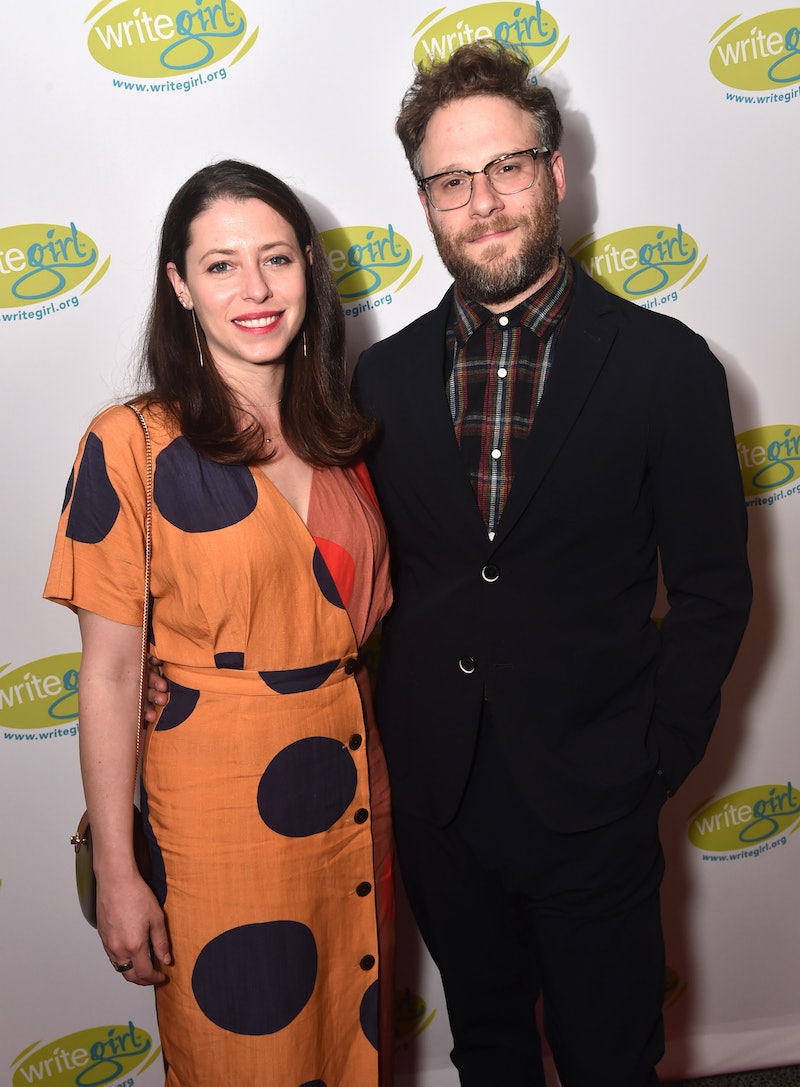 Seth Rogen is so good at what he does that it's easy to get absorbed in his work and think of him as the characters he has played in Knocked Up, Superbad, or any of his other films. But what about the comedic actor's personal life? Seth Rogen has been married to Lauren Miller Rogen since 2011 and their love story is so good it rivals the plot lines of his movies.

In a 2015 interview with Haute Living, Rogen talked about meeting Miller back in 2004 through producer Will Reiser. The actor began, "Will and I were friends, and he said that the girl he was dating had a friend, and that we might like each other, so we went to a birthday party and met." It was basically love at first sight. Following the party, they ate grilled cheese sandwiches late night and played Spanish Scrabble until the sun went up.

Their actual first date wasn't as cute, but it sure was memorable. In 2013, Miller had a positive take on the disastrous first date. She shared with Us Weekly, ''Even our first date was exciting. We played mini golf and then got into a hit and run accident on the freeway. When I got out of the car I hugged him, I needed to hold on to something." The desire to hug him was a good indication of her comfort level pretty early on.

It might have seemed like they had a rough start, but there were other bumps in the road. Fortunately, most of those served as comic relief. Their proposal was something out of a comedy, of the rated-R variety though.

The actor popped the question 2010.... while she was topless. Rogen shared the proposal story during an interview with Conan O'Brien. He revealed, "She was in our closet, changing, and she was literally only in her underpants. I had already kind of started [to propose]." It's unclear why he started proposing mid-wardrobe change, but the story gets even funnier. After admitting, "I didn’t picture it like this, and I know she didn’t picture it like this, he recalled, "I figured the only appropriate thing was to place the ring on her nipple, actually."

Did he actually do that though? Very unclear. It does sound like a hilarious scene though. Maybe he should use it as inspiration for a future film. Rogen elaborated further about the proposal in an article that he wrote for Glamour in 2015. He confessed, "I had more elaborate plans, but once I got the ring, I felt like I had a nuke hidden in my garage, and I had to unload it."

It was far from a standard proposal, but it really is so much better that way. He also revealed, "She said yes, and then we ate buffalo wings and watched Top Chef. It was a great night. We got married in 2011." Buffalo Wings and watching Bravo really is the ideal start to a new life together.

Since the beginning of their relationship they have been living life on their own terms instead of following an "expected" path. During a 2018 appearance on Dax Shephard's podcast Armchair Expert, Rogen talked about the possibility of adding children to their family. He shared, "A lot of people [try to convince us to have kids] because they seem to like their kids."

He continued, "People get joy from it and they feel as though I don’t have that joy. I appreciate that. I’m pretty at peace." He also remarked, "We looked at each other a lot and were like, ‘If we had kids, we could not be doing what we’re doing right now.'"

Rogen and Miller's love story had a very unusual start, but that set the tone for a relationship that is far from conventional and anything but boring. Now, it's time to pen a move based on all of this because it is just too entertaining to not be enjoyed by the masses.