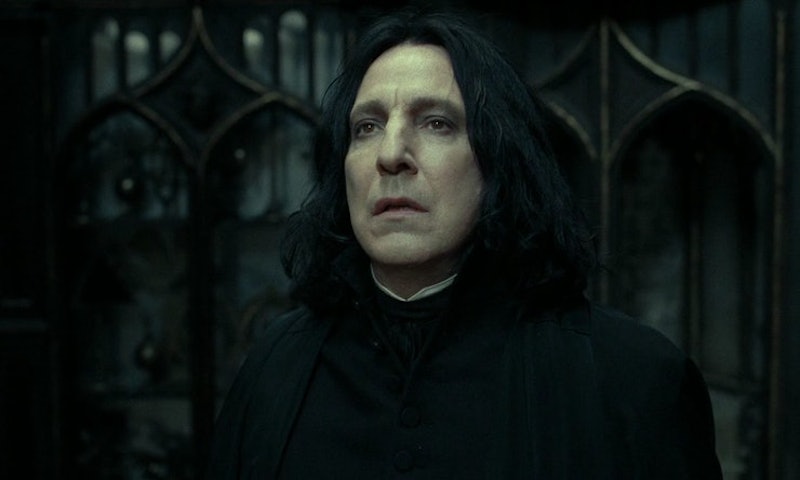 The #MeToo and Time's Up movements have sparked many necessary, public conversations about consent and rape culture in the last few months, and it's high-time for everyone to talk about the fact that Professor Snape is problematic as hell. While some Harry Potter fans insist that Snape is a hero, in my book, he is just another man who didn't listen to a woman when she told him "no."

Despite a history of pretty bad behavior, Snape has been fondly remembered as a "hero" in part because of his lifelong dedication to Lily Potter, whom he fell in love with during their time as students at Hogwarts. The two eventually drifted apart, mostly because of Snape's infatuation with Death Eaters, and Lily eventually married James Potter. But throughout her marriage and after her death, Snape remained devoted to her. After his death, readers learn that everything he has done in the past 17 years has been because of this obsessive, overwhelming love.

"It's too late. I've made excuses for you for years. None of my friends can understand why I even talk to you..." she told Snape in the memory he shared with Harry. "I can't pretend anymore. You've chosen your way, I've chosen mine."

She unambiguously told him that she does not want to be involved with him. Despite this, Snape continued to hold onto the idea that she somehow, in some way, belonged to him.

I know too many women who have been the prey of men who refused to let go. Women who have had to block men through email, text, and social media, because otherwise they will be bombarded by a storm of abusive messages. I know women who have changed their name on Facebook to avoid being found by these men. I know women who live every day with the fear that somehow a man they rejected will find a way to get through to them.

That kind of harassment is frightening, and Snape is no different than these men. To be clear, I'm not saying that he abused Lily. But it's certainly time to hold him accountable for the ways in which his behavior was toxic, even if it was not technically criminal. Snape's attitude reflected a clear irreverence for Lily's wishes. He obsessed over her, and he even claimed her memory and image — i.e. his doe Patronus — without her consent.

Every time I see "Always" inscribed on a wedding cake or tattooed on a couple, I want to hurl. It's not sweet. If anything, it sounds like a threat. The phrase indicates a dangerous attitude that is all-too common in men: "I want you and nothing can stop me." It's an entitled way of thinking, and it reeks of ownership and objectification. It did not matter that Lily had told him "no" — Snape would "always" lay claim to her.

Dumbledore himself says in Harry Potter and the Half-Blood Prince, "When you have seen as much of life as I have, you will not underestimate the power of obsessive love.” In context, he is talking about Voldemort's parents, but in retrospect, it seems like he may be cryptically referring to Snape. In the case of Merope Gaunt and Tom Riddle Sr., that obsessive love causes Merope to use a love potion to essentially date-rape Tom for years. While Snape does not go to these extremes, we can see how his obsession has caused him to do bizarre things and place himself in danger. Surely, this is not behavior we should hold up as heroic.

What is perhaps even more troubling is that Snape took ownership over Lily's story when, in death, she has no agency over it. Readers are only privy to Snape's version of events. I wonder, sometimes, how Lily would recount their relationship if given the opportunity to speak her side of the story. I wonder how she would feel about one of her grandsons being named after Snape. While it is difficult to say what she would have thought of Snape's actions after her death, it is clear that she did not approve of his behavior while she was alive.

The only thing that caused him to change his behavior was his relentless love for a woman who had rejected him. And we're supposed to forgive him because of that? Give me a break. Lily deserved better. All women do.