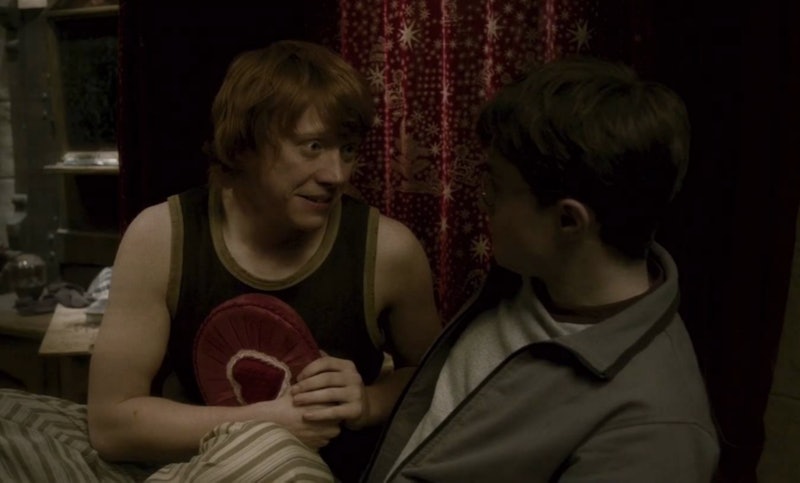 Like most beloved things, Harry Potter has far from escaped the scrutiny of its fans regarding problematic moments. And true, the books date themselves in that a lot of elements that people weren't as outspoken about in the '90s and early 2000s flew under the radar. There are some decidedly un-feminist moments in Harry Potter, some aggressively persistent un-body positive tropes, and a glaring lack of diversity that would certainly be under fire today (the latter of which came to a head with the casting of Noma Dumezweni, a black actor, as Hermione in the play Harry Potter and the Cursed Child). I'm surprised, though, that in light of all of the important topics that we have shed light on, the fandom hasn't touched on one of the most glaringly problematic things in the series: the existence and free use of love potions.

There are two iconic moments in the series in which we see the effects of love potions play out. The first is presented somewhat comically: Ron innocently eats some of Harry's chocolates, without knowing that Romilda Vane had laced them with a love potion she intended Harry to have. Ron is unnaturally and almost dangerously infatuated with her, in one fell swoop abandoning all of his priorities and even semi-breaking up with Lavender within the first few minutes of its effects. We see when Ron takes the love potion just how quickly all of his autonomy goes out the window — and if he hadn't been "cured" (poison from Slughorn aside), then he would have remained that way for a full 24 hours, at the mercy and under the manipulation of someone against his will.

The second incident a love potion comes into play is portrayed far more seriously. Merope, the mother of Voldemort, is desperately in love with Tom Riddle, Sr., the vain, handsome, and generally cruel Muggle man who occasionally passes her cottage. Desperate to escape her circumstances and for her affection to be returned, she drugs Tom with love potions perpetually, forcing him into marriage and eventually into having a child with her. The moment she takes him off of the love potion, he is disgusted with her and flees. It is very clear that given the choice, he would never have involved himself with Merope, let alone married or reproduced with her. And yet the narrative is so wrapped up in the tragedy of the heartbroken Merope and the tragedy of an abandoned Voldemort that it neglects to make a very real and harrowing point — Tom Riddle was raped.

In fact, very existence of love potions is so akin to rape that it is almost entirely undebatable. Just like in rape, the victim's autonomy is taken from them. They are forced into a sexual or romantic act without their consent. When presented this obviously, the idea of it is horrifying — but more horrifying still is the fact that despite Harry Potter being the most popular book series in history, this issue is barely ever discussed.

I think the reason this hasn't generated a lot of discussion is deeply unfortunate, but nonetheless a factor: the victims in question were both men. We have the attractive, dashing Tom Riddle and the goodhearted Ron — not typical "victims." There is also a sense in the narrative that Tom "deserves" it for being an inexcusable jerk, or that Ron "deserves" it for meddling in Harry's business (and being rude to Hermione). Because they are men, and because a lot of us aren't used to framing rape culture as it pertains to men, most of us read this as children or young teens and didn't bat an eyelid — when in fact both situations, the comic and the tragic alike, were genuine and unabashed sexual assault.

The perpetuation lies not just in these two scenarios we saw, but in the very fact that in this world, love potions are allowed to exist. The ingredients to create them are not regulated. And, horrifyingly enough, their creation is taught in the very Hogwarts curriculum.

Teaching students how to make love potions in the Hogwarts curriculum, to me, is the equivalent of sitting in a 10th grade sex ed class and being told by a male teacher that it was my responsibility not to give men the wrong idea — that that was why we had dress codes, and why I shouldn't walk anywhere by myself, or "do something stupid to get myself in trouble" like the unfortunate girls who were assaulted that he would occasionally refer to on the news. This wasn't damaging just because potential victims heard it and internalized it, but because anybody in that room who might one day grow up to be a perpetrator and take advantage of me heard it, too. Those same words that discouraged me and made an assault "my fault" simultaneously put the power in the hands of perpetrators to justify their wrongdoing. Our teacher was unwittingly giving people the tools to do just that the same way that Slughorn does in the sixth Harry Potter book, when he essentially breaks down the creation of Amortentia and explains its effects. In other words, he is giving them permission. He is making sexual assault OK.

When you consider this, what is even more frightening is the acceptance of love potions in the mainstream canon of Harry Potter. Fred and George notoriously sold variations of Love Potions in Weasley's Wizard Wheezes in their "WonderWitch" line, including Cupid Crystals, Kissing Concoction, Beguiling Bubbles, and Twilight Moonbeams. While it is not elaborated in the text exactly what each of them does, one can infer pretty safely that they are milder forms of love potions, intended to make the user feel a lesser degree of attraction — nonetheless against their will, and nonetheless a blatant perpetuation of rape culture.

So, why did we gloss over it as kids, or even as adults rereading it? Again, because in this case, the product was aimed at women, and it was implied that they would be using them on men. Aside from the fact that this product could still be used on virtually anybody, regardless of who it was marketed to — this is still a fundamental violation of a person's body, and still validation of rape. It genuinely terrifies me how cavalierly we are all willing to accept these potions existing harmoniously with this world that seemed so magical and enchanting to us as children, a world that otherwise clearly defined everything in it as "good" or "bad." If we were willing to accept it as harmless within the very series responsible for shaping the moral code of half of a generation, just how far are we from solving this problem in the real world?

I don't mean to vilify Harry Potter for the presentation of love potions or how they interacted with characters in the book. In fact, I think it's important that it did happen in this fictional universe — because now we can look back on it as adults and understand that it is not a joke, that is it not a punchline, that it is not a harmless gag. We now have the knowledge and understanding to un-internalize the way society presented the ideas of "fault" and "deserving it" in sexual assault and rape to us growing up; by virtue of that, we can acknowledge just how genuinely wrong and scary the idea of a potion that takes someone's autonomy from them truly is. And when we read these books to our children one day, we can do it with an informed and deeply necessary framework. We can tell them exactly what is wrong with not just the idea of love potions, but the idea of manipulating anyone — whether through words, through force, or any other means — to do something or put themselves in a situation that they do not want to be in. We can teach them the true meaning of fault and responsibility, and how those terms are one more way of taking agency away from victims. Be it as small of an issue as fictional love potions, or broad of an issue as rape culture in our modern world — this is not our legacy, and this is one more way the "Harry Potter generation" can make strides in fixing it.