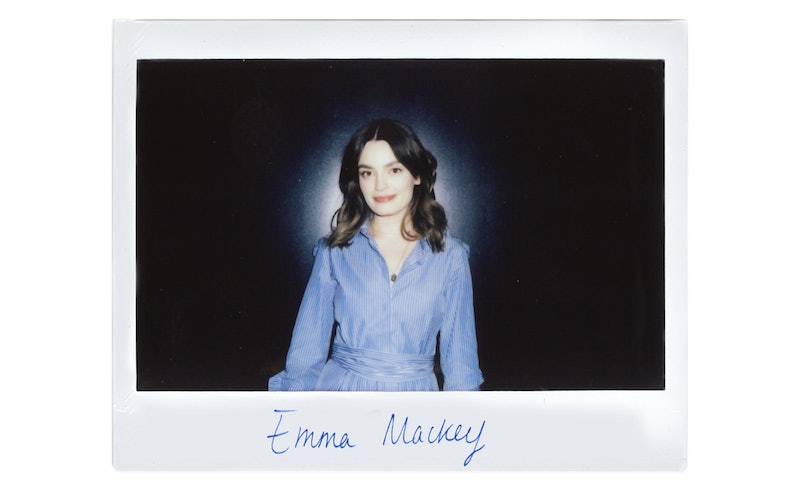 When celebrities hang out with Bustle editors, we want to give them the chance to leave their mark. Literally. So we hand them a pen, a piece of paper, a few questions, and ask them to get creative. The rest is up to them. This time, Sex Education star Emma Mackey is leaving her mark in the Bustle Booth.

When I first meet Emma Mackey, she's grinning. She has every right to be in an upbeat mood — it's been a mere 24 hours since she made her screen debut as Maeve in Netflix's edgy, heartfelt teen comedy Sex Education. But it's jarring in person to see the stark difference between the friendly, well-spoken woman standing in front of me clad in a blue linen dress and her character, an angsty 17-year-old whose preferred outfit is a leather jacket, fishnet tights, pink hair, and a scowl.

It's both a testament to the show's writing and to Mackey's ability that while Maeve certainly looks the part of the classic high-school outsider, her eyes outlined with smudged eyeliner and her nose accented by a piercing, she's much more than a surface-level caricature. Maeve's scrappy boldness and desire for some extra cash is what sets Sex Education's premise in motion, when she cooks up the unconventional scheme of enlisting Otis (Asa Butterfield), the virgin son of a sex therapist, to impart wisdom he picked up from his mother's profession to his sex-confused peers.

Sex Education knows it's depicting a heightened version of reality ("I still think it's weird a teenage boy is a sex therapist," one student-client says skeptically) but that slightly unrealistic premise provides a backdrop for thoughtful and frank conversations about sex, sexuality, and young adulthood that are never preachy and are imbued with a deep sympathy for all those involved — regardless of if they're the band geek, the outcast, or the popular girl.

If we're using specific high-school tropes, Maeve is the bad girl who smokes cigarettes on the edge of campus. But it quickly becomes clear that her hardened outer shell and f*ck-you attitude are armor she's developed as a result of her crappy family life.

"I just felt very protective over her," Mackey tells Bustle of Maeve, who she describes as initially presenting as "quite scary." It doesn't take long for viewers to see the cracks in that intimidating demeanor — she bites her nails nervously, and makes a few concessions in asking for help from others when her situation becomes truly desperate. Mackey's performance is both vulnerable and fearless, and sometimes both at once — particularly in an episode that takes place at an abortion clinic. But relative newcomer Mackey was mostly unfazed by the emotionally heavy scenes. Much like Maeve's peers who are Otis' clients, it was the sex that made her nervous.

"After getting the role I was like, 'F*ck, I’m actually going to have to do these scenes now,'" Mackey admits. But leave it to a show called Sex Education to be more than equipped to guide its young actors through the often tricky process of filming sex scenes: The show set up a workshop day for the cast with an intimacy coordinator, who taught them about the specifics of filming these scenes and facilitated discussions about experience and boundaries.

"It’s like a dance. It’s really mad," Mackey says with a smile, explaining how she coordinated her scenes with Kedar Williams-Stirling, who plays head boy Jackson and one of Maeve's love interests. "We choreographed like, 'So you’re gonna hold me now, we’re gonna kiss for two seconds,' so you practice it so much that it becomes natural and then hopefully looks real. It’s really interesting, it’s a really cool art form."

It's safe to say Mackey got quite the education. To learn even more about her, check out her answers to our Bustle Booth questionnaire below.