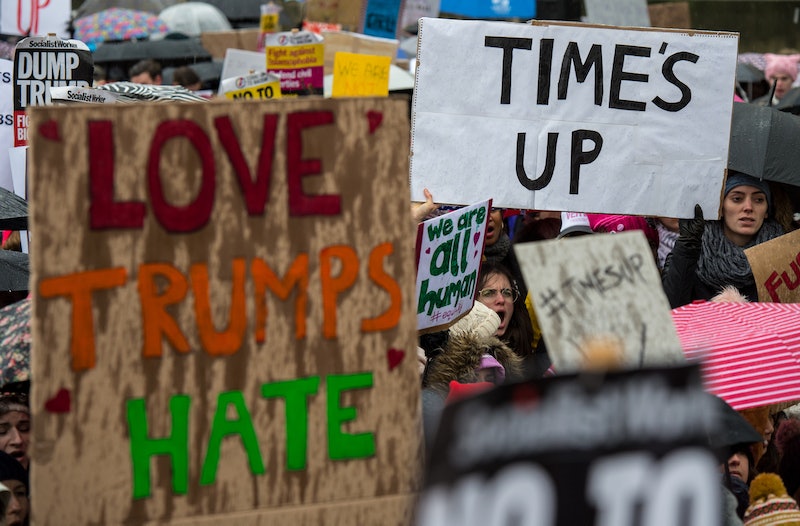 On Jan. 1, 300 women in the entertainment industry announced the launch of Time's Up — an initiative that provides resources and legal funds to survivors of sexual assault and harassment. The initiative followed right on the heels of the #MeToo movement — a national campaign that has encouraged thousands of people across the globe to share their all-too-common experiences of sexual harassment in the workplace and sexual assault. Though activists like Tarana Burke, the founder of the #MeToo movement, have called to make the conversation surrounding sexual assault more inclusive of domestic workers and marginalized groups, the #MeToo movement has struggled with its relationship to marginalized communities. One community in particular has been systematically excluded from this narrative, even as they are far more vulnerable to sexual violence — people in the sex industry.

Women, men, and nonbinary people in the sex industry — including those in pornography, stripping, phone sex, camming, escorting, and more — face disproportionate amounts of sexual assault and harassment internationally, yet are rendered invisible in nearly every movement focused on empowering people oppressed by systemic sexism. "Sex work is filled with #MeToo moments," Lola Davina, a former sex worker and author of the book Thriving In Sex Work, tells Bustle. "Sex workers are unsung heroes on the frontline of the consent wars." And these "consent wars," as Davina calls them, have been happening in our culture long before #MeToo.

Over a year before the #MeToo movement exploded on social media, it was hard not to note the way Jessica Drake, one of the women who have accused Donald Trump of sexual misconduct, was treated in comparison to other women who spoke out against the president. Drake, an adult film actor, was met with immense skepticism; Trump himself dismissed the claims in a news conference, saying “Oh, I'm sure she's never been grabbed before.” Brit Hume, a senior political analyst for Fox News, echoed Trump's sentiment in a series of tweets from Oct. 2016, advising his followers on Twitter to not "buy her claim of offense at [Trump's] proposition” since she works in pornography. As a sex worker and survivor, I was horrified (but not surprised) to watch Drake’s experiences get dismissed and mocked simply because she chose a career in sex work. Yet, it is an all too common myth that sex workers cannot experience assault or harassment. Newsflash: they can.

This topic couldn't be more relevant this Sexual Assault Awareness Month. As the recent debate over SESTA and FOSTA has shown, attempts to "protect" sex workers more often than not conflate sex work with sex trafficking, which in turn endangers people working consensually in the sex industry and threatens their livelihoods — which, as sex workers have noted, could be avoided by considering the input of sex workers on these bills. The recent shutdown of Backpage.com — which was seized by the U.S. government on April 7 — is the latest in attacks against sex workers' safety. With the widely-used platform gone, many sex workers will lose their primary source of income. Moreover, the shutdown will only serve to further endanger people who used Backpage.com, because sex workers will not have a safe way to screen potential clients for abusive behavior. By omitting the sex worker community from conversations about women's rights and rape culture, it perpetuates the stigma and culture of violence that allows violence to be perpetrated against us.

Though organizations designed to support sex workers are few and far between, the Sex Workers’ Outreach Project (SWOP) offers support to sex workers who are sexually assaulted (and sex workers in general) via telephone hotline, email, and online. “Sex workers are human beings with the same rights to give and take away consent at any time just as anyone else. An occupation — yes, that includes the occupation of sex work — does not grant implied consent,” Briq House, the communications director of SWOP USA, tells Bustle. “Sex workers are no different than other labor or service providers. Anything happening outside of the boundaries that have been established between the client and provider is abuse and assault.”

Davina adds, “Just because a person gives me money in exchange for sex or sexuality doesn’t mean they can do whatever they want. I do not ever give up my right to say, ‘This doesn’t feel good, I don’t like this. Stop.'”

Jacqueline Frances, aka Jacq the Stripper, tells Bustle she has “a #MeToo story for every day of the week — on duty and off duty,” and says that even during a recent work shift, a patron tried to forcefully touch her. Though Frances has had a fair share of #Metoo experiences, she acknowledges that sex workers — outside of club settings that have security on-hand — have even fewer protections. "The strip club is one of the only places where I actually feel safe enough to stand up for myself and fight back. Not all sex workers have this privilege," she says.

According to statistics, sex workers who engage in full-service sex work (aka, anything that includes in-person contact or intercourse) are especially vulnerable to sexual violence. Jordyn, whose name has been changed to protect her privacy, is a sex worker from Utah who tells Bustle she takes multiple steps just to protect her physical health and safety. “Whenever I have appointments, I make sure to tell at least one or two people where I am, who I'm seeing, and how long the appointment is for, with the promise that I will check in with them directly after the appointment. They know if I don't, something is potentially wrong,” she says. Jordyn adds that she only accepts clients who have undergone thorough and verified background checks, or that have positive reviews from other people in the sex industry. “If a client cannot provide these things for me, I will only see them if they provide government ID so that I know their legal full name,” she says. “This way, if anything happens, I can take legal action. Threats and coercion are common in sex work, and just because this is what I choose to do with my life does not mean I deserve to ever be mistreated or taken advantage of.”

For many sex workers, though, reporting incidents of sexual assault to law enforcement is not a viable option due to criminalization of some types of sex work, and the increased risks of violence by police or incarceration. It is still legal in many states for undercover police officers to engage in sexual acts with sex workers prior to arresting them — with the exception of full intercourse, which is criminalized in every state but Michigan. However, sex workers across the United States have reported that despite this practice being illegal, undercover police officers still regularly solicit sex from them. This past February, Alaskan Representative Matt Claman introduced House Bill 112 to protect sex workers’ agency, and close the legal loophole that permits undercover law enforcement officers to engage in sexual touching. However, the bill has been met with opposition.

Ultimately, sex workers, activists, and organizations alike have their sights set on the decriminalization of sex work to reduce rates of violence against sex workers, but this will require years — possibly decades — of global policy change. And that is exactly why intentionally centering sex workers in the #MeToo movement and Time's Up is not only essential, but life-saving.

Reducing sexual assault among sex workers begins with conversations like #MeToo. It begins with challenging stigmas, unpacking the taboos surrounding sex, and listening to sex workers. House says the #Metoo movement can become more inclusive by “elevating the voices of sex workers who come forward [with claims of assault].” She also adds that “if a sex worker has experienced violence, and they choose to share their story, it should be treated in the same sensitive light as another person’s story." "I believe sex workers the first time they say something, and do not make them go through some rigorous process to ‘prove’ that they didn’t ‘ask’ for it,” she says.

The non-inclusion of sex workers is not only a pervasive issue when it comes to sexual violence prevention, but is a criticism that can apply to the feminist movement as a whole. Though sex workers like Marsha P. Johnson and Janet Mock have been instrumental in starting the conversation around sex work from a social justice lens, their contributions are rarely recognized — or, if they are credited for their activism, their identities as sex workers are diminished. Even Dr. Maya Angelou, American Poet Laureate, had a history in sex work that has been all but completely erased from her biography.

Frances says self-proclaimed feminists often exclude sex workers and sex workers' rights from the conversation because, “There is a lot of policing of one another’s feminism, as if when we unlock the secret code, patriarchy will simply vanish into thin air. It’s exhausting, and only fuels the patriarchal fire of a ‘perfect woman’ which is really just a pre-existing paradigm of bullsh*t.”

The #MeToo movement and Time's Up have brought justice to the forefront for many survivors, but it continues to be crucial to center the voices of people who may not have the privilege or ability to speak out against their abusers. Stigmatization and in some cases, fears of criminalization, hinders sex workers worldwide from receiving proper medical attention and support services after sexual assault. Sex workers' right to bodily autonomy is just as valid as that of a lawyer, doctor, personal assistant, barista, or anyone. The #MeToo movement and Time's Up will only be successful if it supports the most marginalized communities threatened by sexual violence — sex workers included.