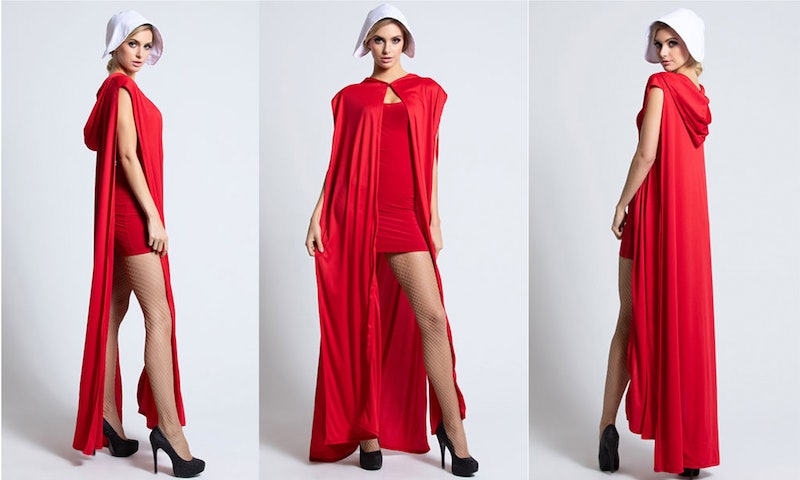 UPDATE: Yandy has issued a statement over Twitter about the sexy Handmaid's Tale costume, and pulled it from their site. The statement below:

"Over the last few hours, it has become obvious that [the costume] is being seen as a symbol of women’s oppression, rather than empowerment. This is unfortunate as it was not our intention on any level. Our initial inspiration to create the piece was through witnessing its use in recent months as a powerful protest image. Given the sincere, heartfelt response, supported by numerous personal stories we’ve received, we are removing the costume from our site.”

EARLIER: It’s almost that time of year again — when the air gets chillier, the pumpkins get spicier, and we have to remind the general public, please, for the love of god, don’t wear an offensive Halloween costume. Take for instance, dressing up in a "sexy Handmaid's Tale costume." Yes, these costumes are something that exist on the internet (of course they do) — but if it's one you're considering for this year, here's why you should definitely think twice.

While most sites can’t explicitly call out The Handmaid’s Tale in their listing for copyright reasons, they are unquestionably inspired by the success of the show — a Hulu series based on Margaret Atwood’s novel, in which the U.S. has become a totalitarian society and women, treated as a property of the state, are forced into sexual slavery. Yandy’s “Brave Red Maiden” costume features a hooded cloak, a white bonnet, and a red mini dress, meant to evoke the outfit of the handmaids... but “sexier.” “An upsetting dystopian future has emerged where women no longer have a say,” Yandy’s costume listing states. “However, we say be bold and speak your mind in this exclusive Brave Red Maiden costume.” (Bustle has reached out to Yandy for comment but had not heard back at time of publication.)

But that's not the only place you can find hypersexualized versions of the handmaid outfit. Earlier this year, sleepwear company Lunya announced Handmaid’s Tale-inspired lingerie with an item dubbed “The Offred.” The red silk pajama set is named after the show’s primary protagonist Offred, who is forced into sexual servitude in order to produce a baby for her higher-status keepers. After initial backlash, a spokesperson for Lunya told io9, “We’re big fans of the show here at Lunya and named the color after Elisabeth Moss’s journey as ‘Offred,’” also adding, “We’re with the resistance!”

According to The Mary Sue, Lunya changed the name from “Offred” to “Scarlett” and the product offering appears to no longer exist.

It may seem unnecessary to say “don’t dress up like a sexy Handmaid.” The Beaverton, Canada’s The Onion equivalent, even posted a satirical news story last year about “sexy Handmaid’s Tale costumes.” Unfortunately, like everything else in our current news cycle, our current reality has merged with that of satire.

In the context of the hidden meaning behind The Handmaid’s Tale costuming, dressing up as a "sexy Handmaid" becomes an even clearer issue. The show’s costume designer Ane Crabtree told Vanity Fair about the intentionality behind the color choice. “There’s a tiny percentage of women who can have babies in Gilead, and those are the Handmaids,” Crabtree said in her interview with Vanity Fair. “That’s their menstrual flow; that’s their lifeblood. You can see them coming a mile away, flowing down the street, like a river of blood.” Hence, why, say, using that as your Halloween costume poses a problem.

If you want to be sexy for Halloween, by all means dress sexy. There are plenty of sexy Halloween costumes that don’t reference a show about rape and misogyny. You can even join Halloween goers and protestors alike and dress up as a handmaid. Make a statement in your red cloak. Just maybe don’t make it “sexy” if you don’t want to be counterproductive to the cause.