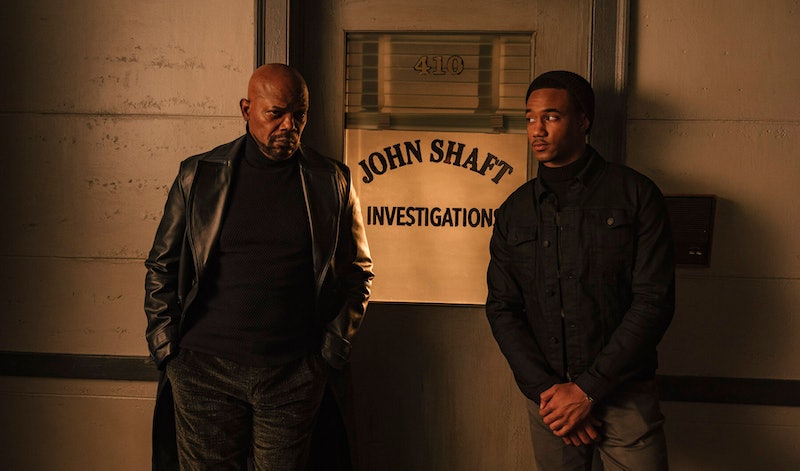 Shaft is back once again, and he's more confusing than ever. In the Shaft hitting theaters on June 14, Samuel L. Jackson returns to the role he portrayed in the 2000 movie of the same name, while Richard Roundtree also reprises the role he originated in 1971's Shaft. So is Shaft a sequel, or a reboot? The new film is the third movie called Shaft, and all three involve the same character. They all feature Richard Roundtree as private eye John Shaft, while 2000's Shaft features Jackson as his nephew, also named John Shaft. The newest version adds Jessie T. Usher as yet another John Shaft, the son of Jackson's Shaft, and this is where things get even more baffling.

The newest film is technically a sequel to 2000's Shaft, but it's also somewhat of a reboot. That's because the film retcons Jackson's character to make him the son of Roundtree's Shaft, rather than his nephew, like he was in the previous Shaft. This was not an oversight on the part of the filmmakers, however, but rather a conscious effort to create three generations of John Shafts. "That choice is because they want three generations, in terms of grandfather, father, and son," Jackson told CinemaBlend. "And it’s not unusual, strangely enough, in black families for somebody to think their ‘uncle’ was their uncle."

The new installment is actually the fifth film overall in the Shaft series, and the second to star Jackson. The first film, Shaft, debuted in 1971 during the blaxploitation craze. It starred Roundtree as the title character, an ultra-cool private detective who takes on the Italian mafia on behalf of a Harlem gangster whose daughter has been kidnapped. The movie was a box office and cultural success, and its theme song by Isaac Hayes also became a smash hit. The next two years saw two more Shaft sequels: 1972's Shaft's Big Score! and Shaft in Africa in 1973, before the character moved to television with a string of seven TV movies between 1973 and 1974.

In 2000, the property was revived with Shaft, with Jackson in the lead role as the ladykilling private eye. But rather than make the movie an outright reboot, Roundtree was brought back as well, making the film a sequel to the original trio of Shaft films. So even though Jackson was portraying a very similar character to the original Shaft, it was still made clear that he wasn't the Shaft, but rather a new Shaft. Now, both Shafts are back yet again for the newest installment. Jackson is the same Shaft he was in 2000, while Roundtree is the same Shaft he was in the '70s (though the relationship between the pair has changed). Usher's new Shaft, however, is breaking the mold.

Usher's character, John "J.J." Shaft, is not a private eye. He does not know his way around a gun, and he doesn't have a reputation as a womanizer. In other words, he's nothing like the other Shafts. Instead, he's a nerdy millennial who works for the FBI's cybersecurity division. But after his best friend is killed, the youngest Shaft turns to his father and grandfather for help in solving his murder... and don't be surprised if the elder duo have J.J. looking and acting more like a traditional John Shaft by the film's end.

The new Shaft is undoubtedly a sequel, but it has some reboot elements to it as well. And honestly, that's probably necessary in order to keep a nearly-50-year-old franchise feeling fresh.

More like this
12 Years Ago, Austin Butler Manifested His Oscar Nom In This Disney Movie Scene
By Jake Viswanath
Sandra Bullock’s Razzies Speech Proves She’s The Ultimate Miss Congeniality
By Sam Ramsden
Anne Hathaway Shared A "Thrilling" 'Princess Diaries 3' Update
By Darshita Goyal
'Girls Trip 2' Will See Our Fab Four Enjoy An International Adventure
By Maxine Harrison
Get Even More From Bustle — Sign Up For The Newsletter
From hair trends to relationship advice, our daily newsletter has everything you need to sound like a person who’s on TikTok, even if you aren’t.