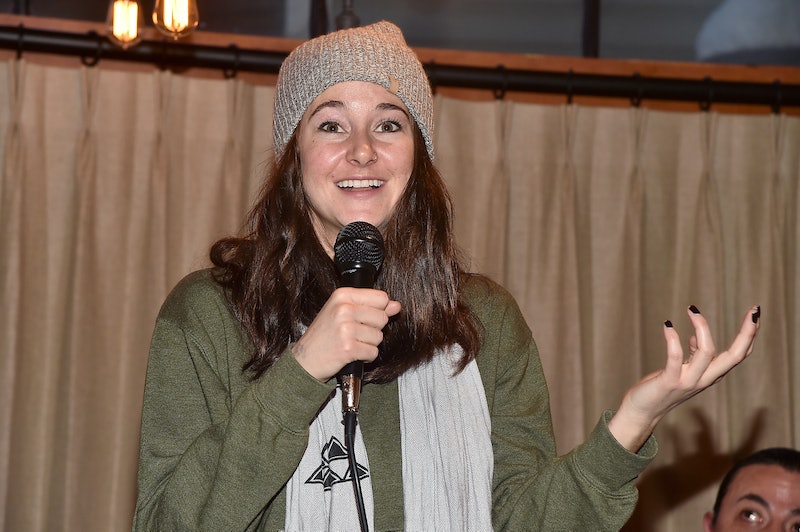 Barack Obama may no longer be in the White house, but that isn't stopping his eldest daughter from continuing to make a difference. As Us Weekly reports, actor Shailene Woodley expressed her delight over spotting Malia Obama at a Dakota Access Pipeline protest at the Sundance Film Festival in Park City, Utah on Monday, Jan. 23.

After getting over how "amazing" it was to see the former First Daughter at the protest against the construction of the oil pipeline near the Standing Rock Sioux Tribe's land, the 25-year-old told Democracy Now she was proud to see the 18-year-old take part in activism while being subject to public scrutiny. She said it was "incredible" and explained,

The high praise from Woodley isn't without merit as the Divergent actor is no stranger to activism. The Big Little Lies star was arrested back in October 2016 for alleged trespassing along with 26 other protestors who were standing up for Standing Rock.

Anti-DAPL activists support the Standing Rock Sioux tribe who believe the project would be "a major environmental and cultural threat" since the route for the pipeline would threaten their ancestral land and burial grounds, according to The New York Times. Those who are pro-pipeline support the notion that construction of the $3.7 billion project will create between 8-12-thousand construction jobs. The Times explains, the pipeline itself "would carry 470-thousand barrels of oil per day from the oil fields of western North Dakota to Illinois, where it will be linked with other pipelines."

Several celebrities have expressed their support of the Standing Rock Sioux including Kerry Washington, Katy Perry, and Mark Ruffalo, according to Just Jared, so Obama is in good company. In addition to popping up at the protest, the future Harvard student will reportedly start an internship with The Weinstein Company in February to keep her busy during her gap year before starting college in the fall.

More like this
Kim Petras Just Made Grammy History
By Jake Viswanath
Gillian Anderson's New Netflix Drama Is *Nothing* Like 'Sex Education'
By Frances Stewart
Matt Hancock’s TikTok Is The Most Matt Hancock Thing Ever
By Sam Ramsden
'Brookside' Is Coming Back & Soap Opera Fans Are Going Wild
By Sam Ramsden
Get Even More From Bustle — Sign Up For The Newsletter
From hair trends to relationship advice, our daily newsletter has everything you need to sound like a person who’s on TikTok, even if you aren’t.