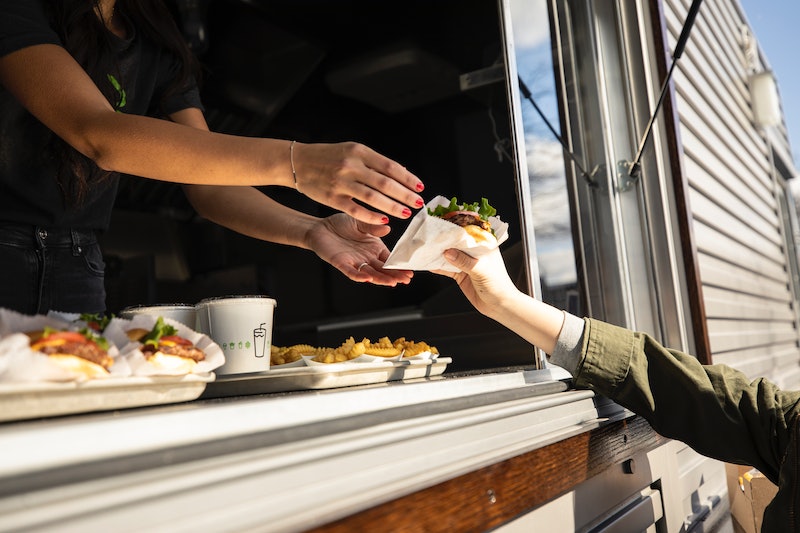 For those of you who have also thought to yourself on occasion, "True love is great, but what's the point of pursuing it if I might not be able to eat Shake Shack at our wedding?", boy howdy, do I have some great news for you. Joining the holy ranks of delicious and highly portable foods are Shake Shack's new food trucks. The course of true love really can run smooth (as long as it has wheels, and a giant Shake Shack sign on top of it).

Per Shake Shack, the demand for food trucks has been voiced by customers for some time, and now the chain is finally delivering with two brand spanking new ones. The first is now available to book in the greater tri-state area of New York, New Jersey, Connecticut, and Pennsylvania, and the second in the Atlanta metro area. Now that the trucks are up and rolling, Shake Shack is letting people book them for events, from conferences to birthdays to graduation parties to, of course, weddings. All you have to do to get the ball (and truck) rolling is fill out this form on Shake Shack's website describing your event and your needs, and Shake Shack will get back to you with availability and rates.

Just in case you weren't already ridiculously hype about the idea of eating a Shackburger out of a truck alone, the menus are entirely customizable to the event — and if you've ever beheld the glory of the full Shake Shack menu, you know just how customizable it can get. In addition to its more traditional burger fare, Shake Shack also has 'Shroom burgers, hot dogs, chicken burgers, and more milkshake options than your eyes will be able to communicate to your stomach. The chain also has gluten-free options for people with dietary restrictions, and many of the locations even have treats for doggos. Basically Shake Shack's got a little something for everyone.

Of course, those of us who are on the Shake Shack beat know that this is far from the only good news that Shack stans have been graced with recently — Shake Shack's Chick'n Bites, which started testing in September 2018, were made a nationwide menu item for a limited time starting on Feb. 4. So while you might not have an excuse to go book a full-on truck right now, at least you have the option of having Chick'n Bites as a side with your Shackburger along with your side of fries and malted shake (don't @ me or my six stomachs!).

And, barring your ability to afford renting the truck, you can always purchase yourself some Shake Shack swag, then go out and buy yourself a Shackburger and play pretend by having your friend serve it to you out of a car window. Be the master of your own Shack fate. Or do what I'm about to do, and trick someone into dating you for the sole purpose of eventually marrying them and summoning the Shake Shack truck as witness. What a time to be young and in love and scrambling for excuses to book a burger truck!