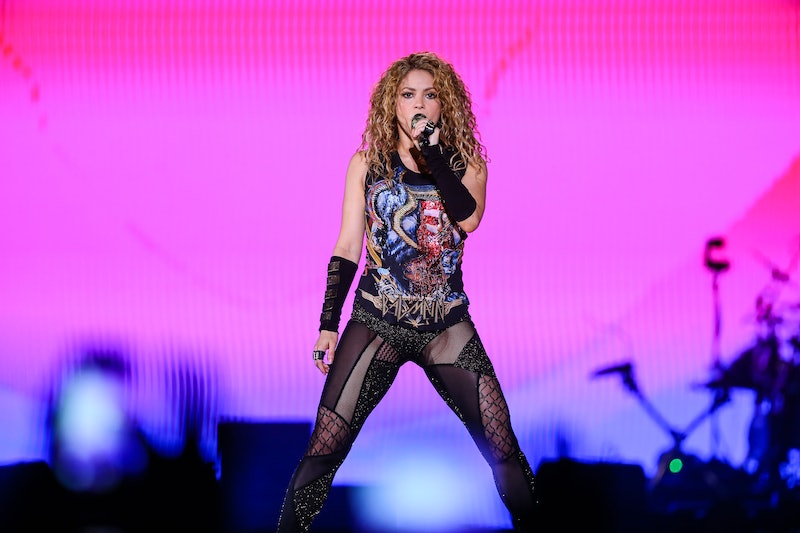 The road to Shakira's 2018 El Dorado World Tour wasn't exactly paved with gold. Right before Shakira was set to kick off her first tour in seven years in Nov. 2017, a vocal hemorrhage forced the Colombian singer to postpone her planned trek across four continents to perform more than 50 shows. "It was really tough, one of the worst, darkest moments of, not only my career, but my life," Shakira shares with Bustle recently over the phone. "I had to postpone a tour that I had worked on for so long, and all of my dreams seemed crushed at the moment."

The bad news didn't end there. Doctors informed Shakira, at the time, that a "very risky" operation offered her best chance at recovery. As the artist explains in her one-night-only film event, Shakira in Concert: El Dorado World Tour (in theaters worldwide on Nov. 13 via Trafalgar Releasing, you can find your local theater at shakira.film), she couldn't even sneeze after surgery, let alone speak. What was more painful: After being away from sons Milan, 6, and Sasha, 4, (with husband, professional Spanish footballer Gerard Piqué) "for some time," she could only communicate with them through signs and gestures for several weeks.

Having to remain silent "for so many days in a row," she shares with Bustle, caused her to both feel frustrated and also realize how important her voice is. Shakira admits there were days she couldn't even get out of bed and feared her voice may never return at all. "It was like my skin, my identity, and so when I lost it, my compass was broken, I had no north," recalls the 42-year-old musician.

Following post-surgery therapy and rehabilitation (plus, meditation and even a trip to Lourdes, France for some holy water), Shakira's "joy came back" and she was finally about to begin her El Dorado tour in June 2018 in Hamburg, Germany. Admitting it "might sound corny," she credits her fans' "love and support" for healing her. That's why she's dedicating Shakira in Concert to them.

Through behind the scenes footage and personal narration, the film documents her very hands-on approach to bring the El Dorado tour to 22 countries and nearly a million fans. The live event, which was shot during Shakira's Aug. 2018 concert in Los Angeles, also includes the star, of course, belly dancing and singing favorites like "Whenever, Wherever," "Hips Don't Lie," and "Si Te Vas." Calling the tour her favorite of her "entire career," Shakira adds that being in front of the audience every night felt like a "miracle" that she can't imagine living life without.

She'll have the opportunity to perform in front of another giant audience again, come February 2 when she headlines the 2020 Super Bowl halftime show with Jennifer Lopez. While Shakira reveals she already has "so many ideas" for her upcoming NFL performance — and has even been "dreaming about it at night" — the challenge, she admits, is condensing her vast repertoire into such a small segment. Regardless, she's committed to making it a can't-miss spectacle.

"I'm gonna put everything I've got into this and try to offer the best show I can because I know that's what America expects," she promises. "I feel I have a huge responsibility, too, with the Latin community that is being represented by me and J. Lo that night. So we're definitely going to bring it on."

At the end of Shakira's concert documentary, she joked that it was time to go back to an easier life, but the singer shows no signs of slowing down. After all, as the El Dorado tour taught her, sometimes you don't fully appreciate your greatest treasures until you come close to losing them.