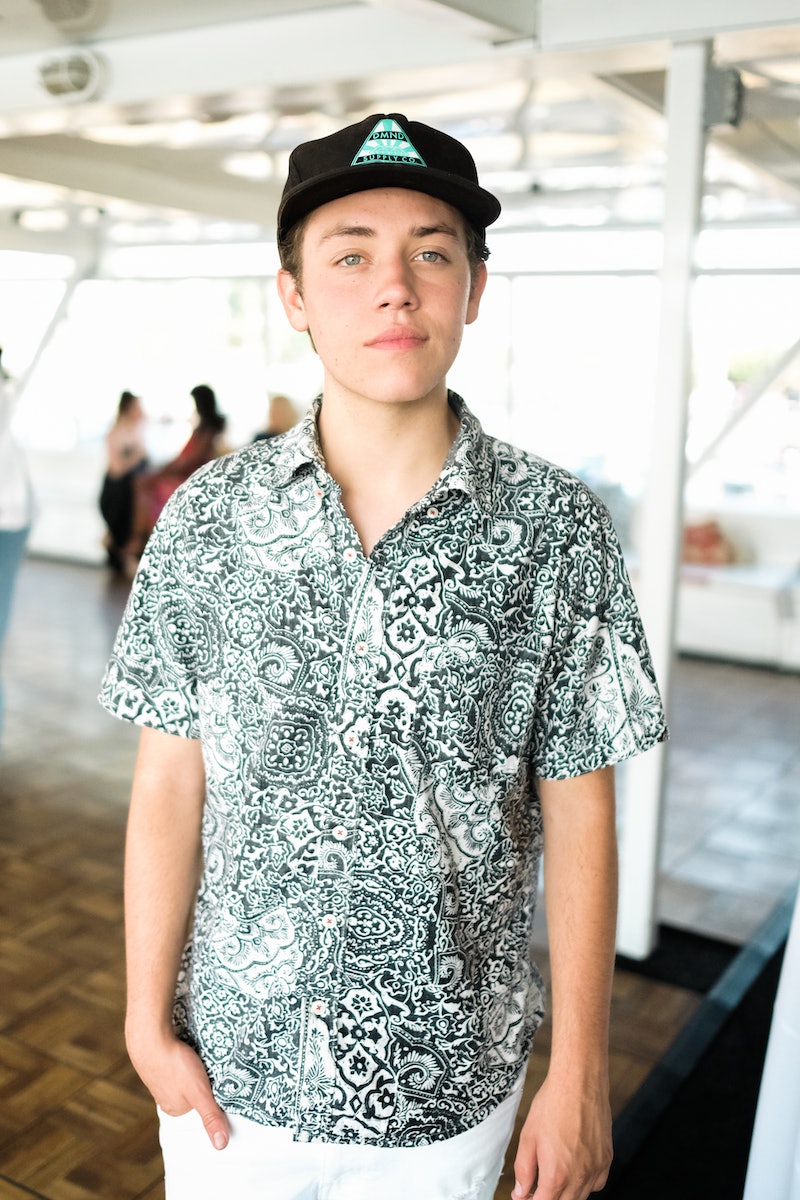 The actor who plays Frank Gallagher's second youngest son on Showtime's Shameless is reportedly in some real life trouble. According to TMZ, Ethan Cutkosky was arrested for suspicion of a DUI in the Los Angeles area last Thursday, Nov. 2. (Bustle has reached out to Cutkosky's representatives for comment, but did not receive an immediate response.) Burbank police told The Associated Press that the 18-year-old, who plays Carl Gallagher on Shameless, was stopped at 10:30 p.m., with law enforcement reporting the actor was "straddling the traffic lines" in his orange BMW. Cutkosky was reportedly arrested, but it's unclear whether it was for drugs or alcohol since the toxicology report has not been released by law enforcement.

The AP reported that, according to the Los Angeles County Sheriff’s Department's records, Cutkosky was released early Thursday morning on $5,000 bail. TMZ later claimed that officers allegedly smelled marijuana in the car when Cutkosky was stopped and that the actor allegedly admitted he had smoked weed earlier that night.

For the last eight seasons, Cutkosky has played bad boy Carl Gallagher on Shameless, which focuses on a family, led by William H. Macy's Frank Gallagher, that is often on the wrong side of the law. Carl, who has an affection for his father that makes him an easy target for his dad's schemes, has always been on a destructive path due to this psychopathic tendencies. Those tendencies include bullying other kids and mutilating animals.

Three seasons ago, Carl even landed in a juvenile detention center in an episode called "Carl’s First Sentencing.” In its review of the episode, The A.V. Club noted that Carl's first time in front of a judge for a heroin scheme was not that farfetched and that the episode played into the character's "progression from mischievous delinquent to outright sociopath."

Over the years, Cutkosky has been given more screentime to play the role, something Mark Mylod, an executive producer on Shameless, said was a testament to his talent.

"When you look at Season 1, the role of Carl was to occasionally say something slightly shocking, but we certainly would never dream of actually putting any kind of narrative on him or giving him any kind of story strand," Mylod told the Chicago Tribune in 2014. In that same interview, he added that, in Season 5, Shameless "needed Ethan's character to pull a lot more dramatic weight, and Ethan stepped up to the plate wonderfully and continues to impress us all both as a young man and as an actor."

Cutkosky has been acting since he was a kid, appearing in print ads and commercials when he was just 4 years old before landing his first role three years later in Fred Claus with Vince Vaughn and Paul Giamatti. A year after that, he appeared in the horror movie The Unborn alongside Gary Oldman, but his big break came when he was 9. That's when Cutkosky sent in an audition tape for Shameless.

"He had a fantastic look," Mylod told The Chicago Tribune of what drew him Cutkosky for the part of Carl. "He looked like he was slightly stoned, and we thought, 'Oh, the kid will never have to do any acting, and he's got this great face." But, "He turned out to be a brilliant actor," the producer explained, "which was a bonus."

That quote might make you roll your eyes after this recent news, but fans should never equate a character with the actor who plays him. In his bio on the Showtime website the Shameless actor says he "enjoys being a regular kid" and "loves skateboarding, jet skiing, riding bikes and motorcycles and pondering metaphysics."

This was Cutkosky's first reported arrest.