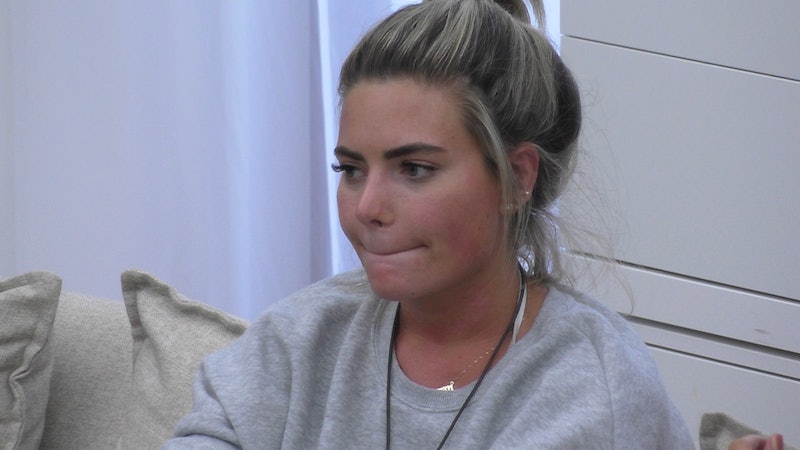 The Love Island lie detector test often brings out some challenging emotions and behaviours for the contestants. Insecurity, defensiveness, and errr... dishonesty. But who would have thought it would have the same effect on viewers? On Monday, amid the many many fans fretting about the future of Jack and Dani, there were also a seriously disheartening amount of people slut-shaming Love Island's Megan for daring to ask Wes if she was "wife material."

Megan has undergone quite a journey during her time in the villa. She's been criticised for her "snakey" behaviour, frustrated fans of the show with her indecisiveness, and slated for allegedly having plastic surgery. But things have been looking up for the model. Since she coupled up with Wes for the second time, she's been winning viewers over by firstly being proved right about Georgia all along (I'm sorry I ever doubted you, Megan), wearing her heart on her sleeve, and asking Wes to be her boyfriend.

All this has meant viewers have been slowly warming up to her (we're talking poolside temperatures, not quire fire pit just yet). But then things took a turn again. During the lie detector challenge, Megan asked Wes was whether he'd be embarrassed to take her to meet his parents and whether he considered her to be "wife material". Leaving the fact that the concept of a woman being "wife material" is sexist in itself for another day and another article, the questions were important to Megan. She's previously worked as a stripper and is clearly insecure about how others will judge her for it. During the series, she's spoken up for women's right to enjoy casual sex just as much as men, and shared frustrations with the judgement they face for doing so. To me her ability to own her sexuality, as she has done for most of the series (except her unfortunate slut-shaming exchange with Laura), is inspiring and empowering. But not for a lot of viewers watching at home.

People took to social media in their droves to mock her for having dared to ask the question, laughing at the idea that anyone with Megan's past and attitude to female sexuality could ever be "wife material". Despite Wes stating he'd be proud to take Megan to meet his parents, his answer came back undetermined. I think we can take him at his word rather than trust the results of a test that's the BBC reports there are "several problems" with. So while I'm pleased as punch that Wes rightly doesn't have any issue with Megan's sexual or professional history, I'm disappointed that many of fans of the show didn't share his perspective.

Reading some of the comments that were posted about Megan after the lie detector episode aired, its not hard to understand why she would be insecure about how others might perceive her. This year's series has done much to expose just how much criticism women receive for daring to display any sign of sexual empowerment or autonomy. But clearly conversations still need to be had. Let's get this straight, women can have as much sex as they want and should not be shamed for it. Women can strip for a living if they want to and should not be shamed for it.

But even some comments supposedly in support of Megan contained some pretty frustrating messages about how we view women who strip for a living. I saw lots of tweets from people saying Megan's past doesn't define her, and while that's true if Megan wants it to be, why is it that her past as a stripper is only acceptable if it is her past, or if she distances herself from it? Why can't she be defined by it and still be deserving of love, happiness, and success? What if it was her present, would she be any less deserving of people's respect? Why do people still equate a woman's worth with some vague, archaic idea of purity?

The idea that a woman is either good, meaning pure or chaste, or bad meaning promiscuous or sexual is misogyny at its finest. It shouldn't have to be said in 2018 but here I am having to say it anyway — strippers are women (or men!) earning money for entertaining people. Women who enjoy sex are just like men who enjoy sex. Women have the right to do whatever they want to with their bodies and still be respected it.