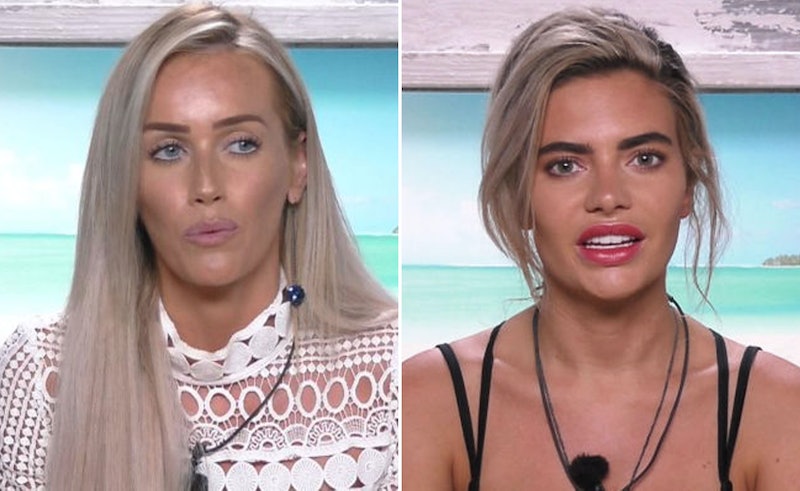 When watching Tuesday's episode of Love Island I was reminded of that iconic Mean Girls scene where Ms. Norbury (Tina Fey) gets up and gives a school hall full of insecure teenage girls some important advice about the way they speak to each other. "You've got to stop calling each other sluts and whores," she tells Regina George and co. "It just makes it OK for guys to call you sluts and whores." This is exactly why Laura and Megan's Love Island fight is so messed up.

The most recent episode of Love Island was a slut-shaming minefield, at every turn someone was calling someone else a "slag" or a "b***h". I get why tensions were running high — there was some seriously snakey behaviour going down. But what does it say about the state of women's sexual liberation that the go-to insults on Laura and Megan's lips were ones containing negative judgements about the number of people they'd slept with?

The double standard in the way men and women's sexuality is viewed has been on full display in recent episodes. First there was that sexual partners guessing "game" which put the girls in the impossible position of trying to own their sexuality while simultaneously sitting in fear that a nation of viewers was sat at home writing them off as "slags."

Megan has been very pro-sex during her time in the Love Island villa, stating that it's 2018 and women should be allowed to enjoy sex free from judgement. That's an attitude I definitely applaud. Unfortunately, during Tuesday's episode, her feminist credentials took a huge hit when, in response to Laura calling her a "slag", she upped the slut-shaming ante and said: "Did she call me a slag? She's slept with more people than me." Honestly. All of this makes me want to shout "Girls!" in my best headmistress voice. But to be fair to Megan, Laura put the first "slag" out there, so let's start by unpicking that.

Last year, Muggy Mike was the series villain, but far from damaging his reputation, the insult has become part of his identity and arguably boosted his career. When men behave "badly," it rarely damages their reputation in the same way it does women. It's important to note that Mike (and Adam Collard) have displayed characteristics that people might refer to as "slaggy" in women, but the insults used about them don't reference their sexuality, just their untrustworthiness.

An insult is an attempt to hurt someone or damage their credibility. So the fact that the most cutting thing the Laura could think to say to Megan was "slag" proves that in the swirling vortex of straight dating culture, the idea still exists that a "slag" is the worst thing a woman can be.

For Megan to hit back with an insult that referred to Laura's sexual history (this is starting to feel like slut-shaming tennis match), even after standing up for Rosie William's right to get intimate with Adam (when viewers back at home were mocking her), it felt like an even bigger blow, precisely because she had been flying the flag for sexual freedom in the series up until this point.

Now, I don't go around holding women to higher standards than men, cause you know, equality. Wes' behaviour last night deserves a thorough dissection in its own right, and the notion that the "other woman" is in some way more responsible than the man is a painful and ugly stereotype that we need to dismantle. But looking at the issue in hand, I do strongly believe that if we as women don't want to be shamed for our sexual activity, we kinda need to start by not shaming each other for our sexual activity. If we don't want to be called slags, let's not call each other slags. Be the feminist change you wish to see in the world. This also goes for Megan using Laura's age against her.

"I don’t want to tread on Laura’s toes and she’s a lovely girl, but from an outside point of view I feel like she’s a lot older and she said earlier she’s in here looking for a husband," Megan said to Wes. "To me you’re 20, you’re so much fun and I just wanted to know where your head was at.”

The nation has seen Laura be mocked for daring to be nine years older than Wes Nelson, despite the fact that no one has batted an eyelid at similar age differences in previous years when the man is older and the woman younger. Megan bringing Laura's age into, just makes it more acceptable for other people to do the same. Would she liked to be shamed if she, when she reaches Laura's age in a few years' time, wishes to date someone a few years younger? I doubt it.

If women don't internalise pernicious misogynist messages and then use them against each other, it makes it a lot harder for those same judgements to be applied by men. Slut-shaming or age-shaming are a lot easier to shake off if other women are there rolling their eyes and laughing it off with you, instead of turning around and joining in. And it showed on social media. It was like Laura and Megan's shouts of "slag" released a slut-shaming tidal wave that took over Twitter. Just search either of their names and you'll see exactly what I mean.

Language is important. It moulds the way we encounter the world. If women slut-shame other women, or use sexist insults against them, we can't expect to exist free from sexual shaming and gendered judgements. Is that really a message women want to send out just for the sake of getting a good insult in during an argument? If women want the world to believe there's nothing wrong with enjoying any number of sexual partners or dating someone younger, and importantly, that doing so doesn't have a single thing to do with a woman's worth, then we have to stop throwing around insults like slut and slag. In the words of Ms. Norbury, "there's been some girl on girl crime here and it's got to stop."

It's always worth remembering who stands to gain from women turning on each other and who wins if women stand together. So go memorise the girl code, and fingers crossed for no more slut-shaming or age-shaming in the Love Island villa.